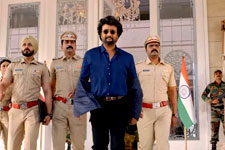 T J Reddy / fullhyd.com
EDITOR RATING
6.0
Performances
Script
Music/Soundtrack
Visuals
7.0
4.0
8.0
7.0
Suggestions
Can watch again
No
Good for kids
Yes
Good for dates
Yes
Wait for OTT
No
Aaditya Arunasalam (Rajinikanth) is the Commissioner of Police for Mumbai, and is waging war on drugs and crime. He doesn't quite believe in the tedium offered by the country's protracted legal system. He also thinks that every city must have its top gangster, and that that gangster should be a Police Officer.

This lack of a measured and moderate approach leads him to crossing paths with Hari Chopra (Suniel Shetty). Chopra was once a local drug lord who set a building housing 27 policemen, on fire. He lacks moderation, too. He is now heir-apparent to the international drug trade. With Darbar, writer-director A R Murugadoss shows us what happens when these two hot-headed combustible elements come together in a nearly 160-minute cinematic journey.

Looking at that runtime, you may have realized that moderation with a film's length is not one of A R Murugadoss's strong suits. He tailors his films with plot beats and sequences which seemingly appeal to every quadrant of the viewing audience. While you might see nothing overtly wrong with that approach, we would like to remind you that eating everything you want to will lead you to gain a whole lot of flab.

Darbar is a textbook example of a director giving an audience everything they want instead of asking himself if everything an audience wants is everything the audience needs. Take, for example, a scene from the third act of the film that has our hero willingly speaking to the chiefs of multiple police departments from across the world. Once the conversation concludes, he turns around to his superior and says he does not need imported assistance because products originating from India are the best in the market anyway. While we appreciate his choice to cull the size of the crew under him, we need to ask, why was a scene that goes nowhere a part of this film? What purpose does it serve in the story?

And that is only the beginning, because once we scratched the surface, we had no option but to dig deeper. Moderation isn't our cup of tea either.

The film's army of superfluous characters rivals that of Arunasalam's brigade of cops. We have Lily (Nayantara), who fits into both the "love track" and the "comedy track" of the movie. So, we ask, when Lily solely satisfies these two aspects, why do we need a separate track for Yogi Babu's Kaushik bloating up the movie's runtime?

Then we have Nawab Shah's Vinod Malhotra, a proxy villain subbing in until the big bad makes his entry. With a full half of the movie devoted to this soon-to-be-neutered character and with Hari Chopra inserted into his place with no ceremony, the film robs itself of two interesting villains for the price of one.

Headscratchers like these are available aplenty. The filmmakers seem to have forgotten to moderate those.

Scratching our heads enough, however, helped us crack through the unwanted exterior and led us to the brain powering the film. The same mind that came up with all the bells and whistles also came up with some clever bits of evil on the parts of Hari Chopra and Vinod Malhotra. It also gives you a genuinely touching emotional core in the form of Valli (Nivetha Thomas). She is the daughter of our hero, Mr. Double A. While most parts of this film harken back to an age gone by, this relationship reminds us that even after 39 years, the Rajinikanth template has some unharnessed aspects to it. The comic, emotional and action bits shared between these two characters greatly help in keeping your interest firmly in the movie.

While Thomas brings the emotion, the irreplaceable Super Star brings the swagger. Few command a screen as he does. The high waisted pants and baggy casual clothes mask his physical limitations, but no amount of age can take away from his scene-stealing prowess. But there is more to Rajinikanth than the punches and punchlines. The ability to take a joke (or ten) about himself, acknowledging his constraints in a genuinely touching scene, whole-heartedly committing to action sequences, and dance numbers are all indicative of his love for and command of the craft.

Ably supporting him are Anirudh Ravichander's score and songs, Santosh Sivan's cinematography, and Sreekar Prasad's editing. The songs and score keep the energy of this flabby script up. In tandem, Sivan and Prasad shoot and edit action sequences with a few clever bits of visual trickery. The slow-mo fight scene in a train station and the Bourne-Esque climactic bit of fisticuffs make for some spellbinding viewing. All we ask is for is more of these.

More smartly choreographed fight scenes. More genuine emotion. Letting Thalaivar explore more of his immense range. More foot-tapping musical numbers. And most of all, more clever villains. Balance all of this with a tighter script, a lower runtime, and fewer extraneous bits and pieces, and Darbar would have been a masala entertainer for the ages.

In a cruel twist of fate, Darbar's expedition into the extreme doesn't make it a good film or a bad film; it ultimately becomes an ordinary one. And in our opinion, many things in life need moderation, but our reactions to a masala entertainer shouldn't be one of those. 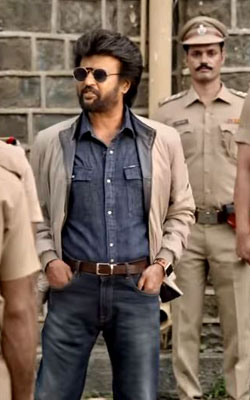 ADVERTISEMENT
This page was tagged for
darbar hindi movie
darbar movie hindi mein
darbar movie hindi
darbar movie review in hindi
darbar full movie in hindi
Follow @fullhyderabad
Follow fullhyd.com on
About Hyderabad
The Hyderabad Community
Improve fullhyd.com
More
Our Other Local Guides
Our other sites
© Copyright 1999-2009 LRR Technologies (Hyderabad), Pvt Ltd. All rights reserved. fullhyd, fullhyderabad, Welcome To The Neighbourhood are trademarks of LRR Technologies (Hyderabad) Pvt Ltd. The textual, graphic, audio and audiovisual material in this site is protected by copyright law. You may not copy, distribute, or use this material except as necessary for your personal, non-commercial use. Any trademarks are the properties of their respective owners. More on Hyderabad, India. Jobs in Hyderabad.