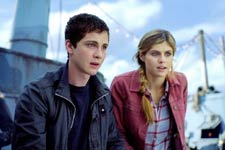 Swayamsrestha Kar / fullhyd.com
EDITOR RATING
5.0
Performances
Script
Music/Soundtrack
Visuals
5.0
4.0
5.0
7.0
Suggestions
Can watch again
No
Good for kids
No
Good for dates
No
Wait for OTT
Yes
There are movies, like Lord Of The Rings, which would be staggeringly impressive celluloid experiences even sans all the grand CGI. The sheer richness of narrative, the overwhelming magnificence of characters (audiences never really recovered from seeing, nay, beholding Ian McKellan bring Gandalf to life), and a smooth cohesion between all the afore-mentioned elements are enough to immortalise a movie.

Percy Jackson: Sea Of Whatevs, on the other hand, is forgettable, precisely because the makers were so busy cramming in the special effects that they forgot they had a film to make. Or rather, they must have lavished all their production money on their special effects team, and forgotten to pay their writers, which is why the screenplay and the narrative seem like some poor unappreciated dude's idea of literary revenge.

While the books by Rick Riordan aren't half-bad, they have not been translated into satisfying movie experiences. The first Percy Jackson movie might have had a tad better reception due to novelty of concept in the beginning (placing characters from Greek mythology and their descendants in a contemporary setting sounds like an intriguing idea), but the bland handling of the text ensured that this momentary peaking-of-attention on the part of the audience didn't flourish into cult followings - the kind that were inspired, and are still sustained, by better books and their celluloid counter-parts.

This movie, the sequel to Percy Jackson & The Olympians: The Lightning Thief begins with a beautifully-shot (or digitally created, more likely) underwater frame, and we are introduced to a slightly grown-up Percy Jackson (Logan Lerman) - demi-god, angsty teenager, and cute pouter. The son of Poseidon is now living with other demi-gods in Camp Half-Blood.

The camp is guarded from "external evil forces" by a tree that grew from the body of Thalia Grace (Paloma Kwiatkowski), Zeus's human daughter, when she was killed while defending her friends from a bunch of Cyclops.

Interestingly, we are also introduced to Percy's half-brother Tyson (Douglas Smith), a Cyclops born out of the (un)holy union between Poseidon and a water spirit.

As far as we could tell, the only definition of a Cyclops is that it is a huge monster with one eye and a terrible hairstyle. It is also one of the many CGI-ly created beings that pop out of nowhere and vanish into that nowhere after being vanquished by some demi-god or the other. No explanations are proffered and the poor things are merely erm... eye-candy.

Moving on, Luke Castellan (Jake Abel), demi-god son of Hermes, and Percy's chief nemesis, wants to destroy the camp, and Mt. Olympus (where the gods live) as well. He poisons the Thalia-tree that guards the camp. To carry out this rather unglamorous task with much show and pomp, he lets loose a hefty mechanical fire-spewing bull into the camp.

He is also determined to resurrect the Titan Cronos - demonic father of the brothers Zeus, Hades and Poseidon - in order to destroy the world. He seems to be doing all this to get back at his dad for neglecting him, which is perfectly understandable and acceptable as a motive, coz y'know, we will next be led to believe that the only reason unicorns don't exist is because trees are allergic to them.

Percy and his gang - the satyr Grover Underwood (Brandon T. Jackson) and Annabeth Chase (Alexandria Daddario), daughter of goddess Athena and our hero's "item" - embark on a quest to find the Golden Fleece so that the Thalia-tree can be revived.

Apart from gargantuan sea monsters that make the Kraken look like a fluffy kitten, they also have to manoeuvre their way around other Cyclops-es, and Luke who wants the Golden Fleece for his bring-back-Cronos campaign.

There's also a prophecy and a brief mention of the Bermuda triangle before the audiences go "story schmory, cheers for the CGI!". And boy, oh boy, such graphics! The luminescent insides of a sea monster's stomach, the Cyclops, an animated sequence in which vibrantly painted glass figurines act out the legend of Cronos and his sons, and the dazzling contours of a sea-horse-like creature - all of them combine to create some of the most stunning visuals (in terms of colour, nuances and aesthetics) that this writer has seen in recent times.

Logan Lerman should seriously do more of "Perks Of Being A Wallflower" and less of Percy Jackson. His heartwarming soulfulness is wasted in these movies. Jake Abel is terribly wooden as Luke. And let's just say that Alexandria Daddario is very lovely and leave it at that. 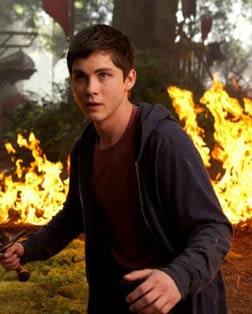 ADVERTISEMENT
This page was tagged for
Percy Jackson: Sea Of Monsters (3D) english movie
Percy Jackson: Sea Of Monsters (3D) reviews
release date
Logan Lerman, Alexandra Daddario
theatres list
Follow @fullhyderabad
Follow fullhyd.com on
About Hyderabad
The Hyderabad Community
Improve fullhyd.com
More
Our Other Local Guides
Our other sites
© Copyright 1999-2009 LRR Technologies (Hyderabad), Pvt Ltd. All rights reserved. fullhyd, fullhyderabad, Welcome To The Neighbourhood are trademarks of LRR Technologies (Hyderabad) Pvt Ltd. The textual, graphic, audio and audiovisual material in this site is protected by copyright law. You may not copy, distribute, or use this material except as necessary for your personal, non-commercial use. Any trademarks are the properties of their respective owners. More on Hyderabad, India. Jobs in Hyderabad.