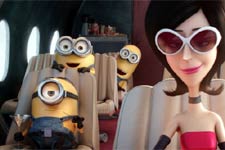 Zehra Abbas / fullhyd.com
EDITOR RATING
6.5
Performances
Script
Music/Soundtrack
Visuals
6.5
6.0
7.0
7.0
Suggestions
Can watch again
No
Good for kids
Yes
Good for dates
Yes
Wait for OTT
Yes
Most people will agree that the banana-yellow, capsule-shaped henchmen that populated Despicable Me 1 and 2 were the USP of the film. Since part 3 of the popular animation franchise is still two years away, a spin-off has made its way to us. Enter Minions - the prequel all you minion maniacs have been waiting for.

Minions traces the origin of the little creatures all the way from the primordial ooze to the 1960s. Right from the beginning, their eternal search, their Holy Grail, is the relentless quest for the biggest, baddest, and, of course, most despicable villain to walk the earth. In minion-speak - Boss!

The hilarious opening montage traces their goggle-eyed journey as the minions go through a string of masters. And what an exhaustive list it is! Prehistoric fish, the T-Rex, Neanderthal man, Dracula, Napoleon... you get the drift, right? But why is the Boss list so long? Therein lies the tragedy, for in all their manic enthusiasm, the minions have an unrivalled ability to inadvertently cause a most painful demise to boss after boss. Things come to head when they find themselves exiled to the Arctic.

Soon enough, in the absence of a maleficent master, the minions sink into depression. Kevin, more oblong than the others, and braver, too, decides to go in search of a new villain. Sidekicks Stuart and Bob accompany him. After an eventful journey from the Arctic to the US, the trio identifies Scarlet Overkill (Sandra Bullock) as the greatest criminal alive, and travels to "Villain Con" in pursuit.

A series of crazy events later, the minions are recruited by Scarlet, and it seems like a perfect meeting of minds. Their goals are the same. Respect? Yes. Power? Yes. Bananas! Er... uh... Yes! Scarlet dreams of wearing the crown of England, and she sends the minions on a mission to steal it.

Needless to add, things go horribly wrong. Kevin, Bob and Stuart remain true to their inherent minion tendencies, and pretty much destroy Scarlet, and her inventor husband, Herb Overkill (Jon Hamm, hamming away rather unsuccessfully). Luckily for them, they run into little, pre-teen Gru (Steve Carrell) at the end, who has already embarked on his villainous career.

Minions doesn't really have a substantial plot to speak of - when you hear the little guys singing the Universal Studios theme at the beginning of the film, that's your signal to immediately suspend all disbelief. To be fair to the writers, the film is about little, yellow creatures whose official language is gibberish.

The comedy relies overwhelmingly on slapstick and over-the-top antics, not to mention bucket-loads of cuteness. What is lacking is good dialogue-writing, and it's quite telling that the minions' gibberish (brilliantly voiced by co-director Pierre Coffin) is funnier than the actual English lines.

Another negative is the lack of interesting characters. Scarlet Overkill takes centrestage, and like all "good" bad guys, she seems to have the complete package. Maniacal. Check. Violent. Check. Vain. Check. Heck, she's even got booster jets hidden in her skirts to help her fly. Ironically, Scarlet's character doesn't take off at all. Bullock sounds strangely self-conscious and underwhelming, while it's jarring to hear the suave Don Draper from Mad Men voicing her silly husband Herb.

One of the funniest characters is, believe it or not, Queen Elizabeth (Jennifer Saunders). Trust us, she never looked this good in real life. She body-slams villains, guzzles beer at a pub, and arm-wrestles burly subjects. The Queen should not think twice to just knight the makers of this film for the best PR ever. If there were more of this hilarious rendition of the British monarch, or even of the crazy Nelsons - a nice Midwestern-type family that robs banks on the side - then this movie would not have lost the adult members of the audience.

That doesn't mean that there isn't anything for the grown-ups - you'll enjoy the soundtrack, which pays homage to the '60s setting by throwing in a mix of The Doors, Jimi Hendrix, The Who, The Kinks and so on. Or, you can keep your eyes peeled for the sprinkling of interesting pop culture references like Nixon's poster proclaiming his trustworthiness, or the filming of the moon landing, in a studio. Also, the depiction of the British, and all things British (right down to the scones) is pretty amusing.

Unlike recent animation features, this one doesn't stress too much on a message or an overarching theme. It makes the most perfunctory of nods to the idea of friendship and sacrifice, and keeps the focus on its titular characters. Kids will enjoy the non-stop antics of the cutest henchmen around, and the film will definitely crack them up.

These little critters "Gru" on everyone thanks to the Despicable Me films, and you, too, might find yourself ignoring the negatives of this spin-off due to a nostalgic and irrational love of the minions. If not, wait for the 2017 release of Despicable Me 3. Till then - kumbaya!
Share. Save. Connect.
Tweet
MINIONS (3D) SNAPSHOT 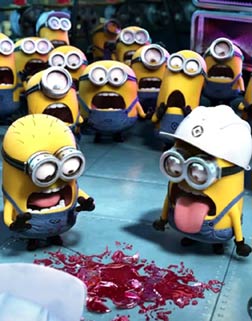 ADVERTISEMENT
This page was tagged for
Minions (3D) english movie
Minions (3D) reviews
release date
Sandra Bullock, Jon Hamm
theatres list
Follow @fullhyderabad
Follow fullhyd.com on
About Hyderabad
The Hyderabad Community
Improve fullhyd.com
More
Our Other Local Guides
Our other sites
© Copyright 1999-2009 LRR Technologies (Hyderabad), Pvt Ltd. All rights reserved. fullhyd, fullhyderabad, Welcome To The Neighbourhood are trademarks of LRR Technologies (Hyderabad) Pvt Ltd. The textual, graphic, audio and audiovisual material in this site is protected by copyright law. You may not copy, distribute, or use this material except as necessary for your personal, non-commercial use. Any trademarks are the properties of their respective owners. More on Hyderabad, India. Jobs in Hyderabad.