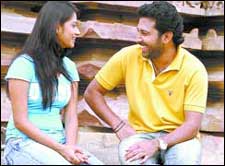 Priyanka Pulla / fullhyd.com
EDITOR RATING
5.0
Performances
Script
Music/Soundtrack
Visuals
NA
NA
NA
NA
Suggestions
Can watch again
NA
Good for kids
NA
Good for dates
NA
Wait to rent it
NA
Of the sheer cornucopia of themes available for movie directors, Bharadwaja picks the death sentence - and that too, the defense of it - as the theme of Pothe Poni. Next, the script uses every possible clichéd, textbook reason to justify its cause, and when it is clear that’s not working, it starts shouting itself hoarse like a Victorian hysteric, the kind Freud used to study repression. When the story starts fainting, exactly like the Victorian we mentioned, even more lungpower is pumped in. By the last scene, Pothe Poni is, literally and figuratively, a deafening cacophony.

How it all begins is that Chaitanya (Shiva Balaji) is an idealistic young lad who is less concerned with getting a job and making money, and more with helping the downtrodden. Shanti (Sindhu Tolani) is his childhood buddy and does not subscribe to his point of view. A lot of Nuvve Kaavali style confusion between love and friendship ensues, and ultimately they decide it’s love after all.

This 3/4ths of the movie having gone by, Chaitanya gets shot dead in a naxalite ambush. Shanti takes up his cause, files a case against the naxalites, rouses the entire nation and grins into the camera.

It is only at the halfway point that you realize you’ve been conned, and start twisting and turning painfully like a colic baby. The movie is pedestrian till the interval, after which it gets aggressively boring. On one hand it leads you on, because you can’t second-guess the ending, and yet it still pulls off the feat of dumping another cliché on you from its magic-hat.

There are elongated scenes of Shanti waxing eloquent, as self-indulgently as a child practicing alone for a mono-act. Her primary beef is that the naxalites should be hanged instantly, but she whimsically skips onto one social ill from another. Like a faithless bee that hops from bloom to bloom, she fancies everything from corruption to police encounters. Around her listening are politicians, naxalites and the public, wearing quizzical expressions much like the animals around the table in the Mad Tea Party in Alice’s Wonderland.

MAA TV anchor Swapna plays herself, bringing her sweet, chubby and indifferent expression to Shanti’s battle. She looks as lost and out of place as Mandira Bedi on a cricket channel. And yet, she persists.

Shiva Balaji is mostly lover boy and fractionally idealist. He could do with a good shave, but he is all right otherwise. Left unescorted in a script that whirls around like a dervish, he does his best to ground himself and act sensible. He manages.

The music is the saving grace of Pothe Poni. Micky Meyer’s tunes are melodic, and he clearly has a penchant for using echo effects. He brings in a lot of instruments too – trumpets and vibraphones among others. The song Cheliya is strongly reminiscent of Shankar Mahadevan’s Breathless, and gets you tapping your feet and grooving away as much as you can while sitting down.

Inadvertently, Pothe Poni got christened appropriately, for that is the attitude you should adopt for this movie. Chill out and catch Narnia instead. And for Thamareddy Bharadwaja’s movie – pothe poni!
Share. Save. Connect.
Tweet
POTHE PONI SNAPSHOT

ADVERTISEMENT
This page was tagged for
hotile poyhe
potheponi telugu movie
Pothe Poni telugu movie
Pothe Poni reviews
release date
Follow @fullhyderabad
Follow fullhyd.com on
About Hyderabad
The Hyderabad Community
Improve fullhyd.com
More
Our Other Local Guides
Our other sites
© Copyright 1999-2009 LRR Technologies (Hyderabad), Pvt Ltd. All rights reserved. fullhyd, fullhyderabad, Welcome To The Neighbourhood are trademarks of LRR Technologies (Hyderabad) Pvt Ltd. The textual, graphic, audio and audiovisual material in this site is protected by copyright law. You may not copy, distribute, or use this material except as necessary for your personal, non-commercial use. Any trademarks are the properties of their respective owners. More on Hyderabad, India. Jobs in Hyderabad.