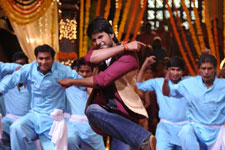 Ravi Kandala / fullhyd.com
EDITOR RATING
4.0
Performances
Script
Music/Soundtrack
Visuals
6.0
3.0
3.0
5.0
Suggestions
Can watch again
No
Good for kids
No
Good for dates
No
Wait to rent it
No
You can almost see how Ra Ra Krishnayya got made. The producers and the director of the movie must've gotten together in a room and asked each other the following questions:

Q: What were the last small budget Telugu hits and who starred in them?
A: Venkatadri Express starring Sundeep Kishan, and Kotha Janta with Regina Cassandra.
Conclusion: There we have our lead pair - Sundeep and Regina.

Q: Which character actor can add weight to our movie?
A: Jagapathi Babu - he just made his comeback as a villain in Legend and people seemed to have loved him.
Conclusion: Okay, rope him in - and yeah, rope in Kalyani, too - the two were some sort of a hit pair some time ago.

Q: Which was a recent really big hit from which we can plagiarise bits and pieces of the story, and also some locales?
A: Chennai Express.
Conclusion: Good, good - let's make a road movie like Chennai Express so we can showcase some awesome locations. But not a complete road movie - let's add stupid family sentiment in the second half.

Q: Who's a comedian we can use and discard in our movie as per screenplay demands?
A: Thagubothu Ramesh.
Conclusion: Add him to the cast.

After this highly analytical Q&A session, director P Mahesh Babu must've been sure that he had a winner on his hands. But audiences can be so unpredictable, no? Even when you do everything so logically, they nit-pick about things like the movie needing to be entertaining, original, gripping, fun and all that.

Ra Ra Krishnayya is about an honest taxi driver Kittu a. k. a. Krishna (Sundeep Kishan) who works for the owner of a taxi company, Manikyam (Tanikella Bharani). Krishna gives his hard-earned money to Manikyam for safekeeping, and when he finally demands it back, gets the cold shoulder. He decides to fight it out and lands up at Manikyam's house in a drunken state. Here, he gets into an altercation with Manikyam's goons and ends up kidnapping his daughter, Nandu (Regina Cassandra).

The two travel all around South India, and after some chunks distinctly resembling the Kerala sequences in Chennai Express, Krishna takes his money from Manikyam and releases Nandu. But before Nandu can reach her dad, a twist happens that suddenly turns the story on its head. We are now introduced to Jaggu Bhai (Jagapathi Babu), whose family business is kidnapping people. How he is related to the entire story and how the film plods on a tedious path to an extremely routine ending forms the remaining story.

Ra Ra Krishnayya is guilty of a few things - a screenplay that is too lethargic, a story that is clichéd, a soundtrack that is loud and not much else, a comedy track that is not funny, a sentimental track that does not work, and a runtime of 140 minutes that feels like 1,400 minutes. Okay, so not so few after all.

If something works for the movie, it is the acting. Sundeep and Regina pull off their roles quite well, with Regina deserving special mention. The girl looks good and manages about 20 expressions more than our standard Goan and North-Indian imports. Jagapathi Babu also does decently well in the role of a comic don, and some comedy in the second half manages to make you laugh. Kalyani has nothing to do.

The music, like we mentioned earlier, is loud and not much else. Technically, the film is sound, with the cinematographer doing a fine job of capturing some good locales in Kerala in the first half.

Ra Ra Krishnayya does not have much going for it. We know Sundeep Kishan is trying to encash his hit-hero status, but he would do better to look for scripts with more substance.
Share. Save. Connect.
Tweet
RA RA KRISHNAYYA SNAPSHOT 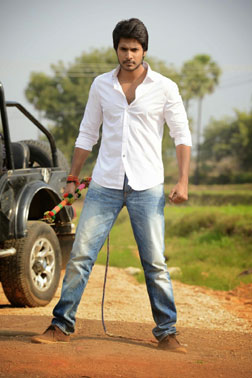 This movie is a copy/remake/adaptation of that movie...

ADVERTISEMENT
This page was tagged for
Ra Ra Krishnayya telugu movie
Ra Ra Krishnayya reviews
release date
Sundeep Kishan, Regina Cassandra
theatres list
Follow @fullhyderabad
Follow fullhyd.com on
About Hyderabad
The Hyderabad Community
Improve fullhyd.com
More
Our Other Local Guides
Our other sites
© Copyright 1999-2009 LRR Technologies (Hyderabad), Pvt Ltd. All rights reserved. fullhyd, fullhyderabad, Welcome To The Neighbourhood are trademarks of LRR Technologies (Hyderabad) Pvt Ltd. The textual, graphic, audio and audiovisual material in this site is protected by copyright law. You may not copy, distribute, or use this material except as necessary for your personal, non-commercial use. Any trademarks are the properties of their respective owners. More on Hyderabad, India. Jobs in Hyderabad.