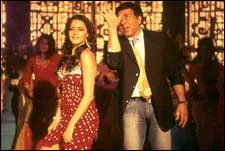 Priyanka Pulla / fullhyd.com
EDITOR RATING
3.0
Performances
Script
Music/Soundtrack
Visuals
NA
NA
NA
NA
Suggestions
Can watch again
NA
Good for kids
NA
Good for dates
NA
Wait to rent it
NA
Teesri Aankh begins promisingly for the small rag-tag bunch of young men who alone are most of the population of the cinema hall. Sapna (Neha Dhupia) leaves for London to participate in a 'Face Of The Year' contest and gets caught in a blue-film scandal. They film her in a changing-room slipping off her clothes, and blackmail her.

A deluge of scenes from strip-clubs follows - with Sudama Pandey (Mukesh Rishi), the villian, gesturing to the girls to do something 'different' as they systmatically slip off their skimpy tunics to reveal sinuous bodies.

The men in the theater are in raptures by now, hooting and cat-calling. Then Sapna gets killed.

As the rest of the movie progresses, never does one get a clue why Dhupia needed to be eliminated from the plot. Her boyfriend ACP Arjun (Sunny Deol) was tailing the gang anyway. He would have busted them anyway. And Dhupia's fantastic body could have been leveraged a lot more than it is by pumping a ketchup laden knife into it.

Maybe this had something to do with Dhupia's recent decision not to pose in bikinis anymore after Julie. Hmmm. If that is true, it's sad, because the movie collapses like a Tsunami-hit beach-hut from this point on.

Enter Amu (Amisha Patel) in the role of a dumb - no, literally - director's assistant who lives with her sister Aarti (Aarti Chabria) and her husband Ashish (Ashish Choudhary), and helps the couple out with making movies. Baweja finally cracks the secret of getting Amisha to act a little less like a wax doll. By imposing dumbness on her, he leaves the rest of her senses free for maximum emoting.

And she really is good. Clad from top-to-toe in T-shirts and cargo-pants, and playing a helpless murder witness on the run, suits Amisha a lot more than senseless glamor roles which make demands on assets she doesn't have.

Amu is the witness for Sapna's heinous murder by Sudama's minions Dinesh and Dinesh (Mukesh Tiwari and Murli Sharma). A corrupt police official from India helps complicate things so that what begins as a hint of a tight thriller, splays itself out awkwardly like a newborn foal, into a cuckoo's ravings about the social-system and the way we treat women.

The cuckoo we are talking about is Sunny Deol. First he does his armored tank act, charging into the goons and blowing them off into the sky. Then suddenly he launches off into a reverie of his pre-London days as he talks to Amu. His nostalgic tale includes rescuing girls from wolverine predators who film them unknowingly with spycams.

Once done with his tale, Amu appropriately mentions how Sapna is already dead and hacked to pieces, hearing which Arjun's eyes moisten. He promptly picks himself up, finishes off the remaining serving of goons like cleaning the last splatter of ketchup from a plate with a piece of sandwich, and smiles into Amu's eyes as the credits rolls.

Teesri Aankh is a disappointment because while being an insensitive movie, it is not ballsy enough to go all the way. It uses the spycam scandals for wanton titillation, yet when the time for resolution comes, it starts moralising with its tail between its legs like a chastised school-kid asked to repeat the rules.

The skin-show seekers are dissatisfied while serious moviegoers are disgusted. A couple of routines of pole-dancing women, or a fervently barked out bombast by Sunny Deol, unfortunately don't a masala movie make. What we get is a hotch-potch chaat of elements that wouldn't go down smoothly through any discerning gullet.

Whatever you are looking for, avoid this next in line of Amisha's army of stinkers. This time she isn't at fault - it seems to have become a fatalistic trend. Time for Amisha to sit back and begin a probably really long wait for well-crafted movies. As for you and me, the same wait goes on as Teesri Aankh does a complete turkey.
Share. Save. Connect.
Tweet
TEESRI AANKH - THE... SNAPSHOT
TEESRI AANKH - THE HIDDEN CAMERA SNAPSHOT

ADVERTISEMENT
This page was tagged for
Teesri Aankh - The Hidden Camera hindi movie
Teesri Aankh - The Hidden Camera reviews
release date
Amisha Patel, Sunny Deol
theatres list
Follow @fullhyderabad
Follow fullhyd.com on
About Hyderabad
The Hyderabad Community
Improve fullhyd.com
More
Our Other Local Guides
Our other sites
© Copyright 1999-2009 LRR Technologies (Hyderabad), Pvt Ltd. All rights reserved. fullhyd, fullhyderabad, Welcome To The Neighbourhood are trademarks of LRR Technologies (Hyderabad) Pvt Ltd. The textual, graphic, audio and audiovisual material in this site is protected by copyright law. You may not copy, distribute, or use this material except as necessary for your personal, non-commercial use. Any trademarks are the properties of their respective owners. More on Hyderabad, India. Jobs in Hyderabad.