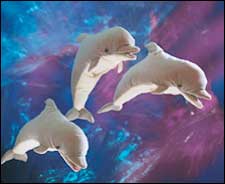 Ghazala Rizvi / fullhyd.com
EDITOR RATING
5.0
Performances
Script
Music/Soundtrack
Visuals
NA
NA
NA
NA
Suggestions
Can watch again
NA
Good for kids
NA
Good for dates
NA
Wait to rent it
NA
Dolphins! The picture conjured up the moment anybody thinks of a dolphin is of a sweet, comic-looking fish, with a genuine smile pasted on its lips, and gleefully balancing a ball on its nose. If you have watched a lot of Discovery Channel, you'll also imagine them rollicking in the clear waters of a swimming pool, leaping high over water, and even giving out occasional kisses to cherubic kids.

Dolphins, the movie, goes a little beyond your imagination - it's a documentary. Not on dispelling the secrets of the amazing lifestyles of these dusky creatures, but on the bottom line hard-work and vigor sported by dolphin researchers. Researchers who have spent decades in trying to make sense out of the underwater clappings, whistlings, clickings and squeakings.

The movie focuses on the work of three scientists, Kathleen Dudzinski, Bernd Wursing and Alejandro Acevedo, and a dolphin lover, Dean Bernal. Kathleen is shown spending backbreaking hours in the Bahamas underwaters, tracking communication patterns of the Atlantic Spotted Dolphins, while Alejandro delves into the Patagonian waters studying the feeding behavior of the Dusky Dolphins. Brend is trying to decipher their IQ levels, while Dean Bernal is exploring their EQ.

The painstakingly slow progress of the research process takes away any Eureka factor from the film. However, the amazing shots of the dolphins clubbing together to goad a shoal of anchovies into a bait-ball, and taking turns to dine on them, seen on the IMAX screen, compensate largely for any lack of pace.

Digressing very little from its harsh documentary style script, the movie has a few moments of foreplay, when JoJo, a dolphin, is shown sharing a rare bond of friendship and companionship with Dean Bernal. Frolicking off the Turks and Caicos coasts, in the British West Indies, JoJo is a lone Dolphin, who, unlike others of its kind, seeks out human contact and comfort. Dean Bernal is JoJo's official caretaker, and has been a playmate for this amazing animal for the past 15 years.

Dolphins jolts you out of the blissfully ignorant TV-side enjoyment of the antics of a cuddly friendly animal. It brings to the forefront, the grit that goes behind the scenes in creating just one minute of the on-screen footage starring these expert acrobats. Unlike T-Rex - Back To The Cretaceous, Dolphins doesn't include a half-baked story to moot its point. With a delectable voice-over by Pierce Brosnan, and background scores by Sting, the narration proceeds smoothly, punctuated by several dolphin moments - leaping, imitating and smiling dolphins.

There are facts and myths galore, as we humans are still decades behind understanding how dolphins defy so many laws and thumb rules of nature - like how, with all their weight, they leap so high; why they call each other by names; and how can they use one eye to sleep while keeping a lookout for predators with their other eye.

Dolphins presents an overwhelming abundance of the sea, the reefs, and the dolphins in their natural habitat, all for a specific purpose - to recruit dolphin lovers before they grow-up.
Share. Save. Connect.
Tweet
DOLPHINS SNAPSHOT

ADVERTISEMENT
This page was tagged for
Dolphins english movie
Dolphins reviews
release date
Dr. Kathleen Dudzinski, Dr. Bernd Wursing
theatres list
Follow @fullhyderabad
Follow fullhyd.com on
About Hyderabad
The Hyderabad Community
Improve fullhyd.com
More
Our Other Local Guides
Our other sites
© Copyright 1999-2009 LRR Technologies (Hyderabad), Pvt Ltd. All rights reserved. fullhyd, fullhyderabad, Welcome To The Neighbourhood are trademarks of LRR Technologies (Hyderabad) Pvt Ltd. The textual, graphic, audio and audiovisual material in this site is protected by copyright law. You may not copy, distribute, or use this material except as necessary for your personal, non-commercial use. Any trademarks are the properties of their respective owners. More on Hyderabad, India. Jobs in Hyderabad.