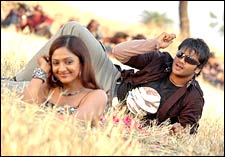 EDITOR RATING
5.0
Performances
Script
Music/Soundtrack
Visuals
NA
NA
NA
NA
Suggestions
Can watch again
NA
Good for kids
NA
Good for dates
NA
Wait to rent it
NA
There is a word for the tension that you feel when a movie’s first half is shaping up pretty well. It is called déjà vu, which, for our non-French readers, means “the memory of having seen innumerable Telugu films get screwed up in the second half after a delightful first half simply because Telugu film scriptwriters think that in the second half you have to get serious and narrate the actual story of the movie which invariably involves people’s so-far-happy lives go haywire.”

Rajubhai is a classic example of a scriptwriter unable to be an ordinary member of the audience. There’s a difference between being able to write emotionally deep stories, and being able to entertain people. When people have paid you for 150 minutes of entertainment, you do not keep them depressed for 75 of those minutes since everybody on screen is crying. And on top of it, if a viewer can find ridiculously simple solutions to all the devastating woes your characters are facing, he feels frustrated at the stupidity of the characters too.

Raju (Manoj) is a standard Telugu film hero – i. e., a good-for-nothing uneducated lout, a concept that will probably not go out of fashion in Tollywood until 2136AD or until the Tamil film industry exists, whichever is later (this film is a remake of some Tamil film). Sheesh, this thing went out of reckoning in Bollywood about the same time that Amitabh’s angry-young-man did.

So Raju can beat people up, and gets recruited by a local don (Dandapani) to do the same in a more organized manner. He falls in love with Anjali (Sheela), who gets him to reform and earn a livelihood in a more socially acceptable fashion. However, Raju gets caught in a police bust-up of a brothel, leading Anjali to conclude that he was doing there what is popularly done in brothels, and breaking up with him.

Raju is shattered, but for some weird reason will not tell her just why he was there. The whole second half progresses like this – he is heart-broken and singing songs normally written for special-purpose disasters, she hates him and is getting engaged to someone else, her father dies, and you feel you are going to follow suit soon. The film fortunately has a happy ending – you are happy that it ends.

The first half of Rajubhai is pretty decent with its light-heartedness – and Manoj is surprisingly good in his emoting and his dances. The visual and the sound quality/effects deserve a mention too. However, the second half, like we mentioned, is pretty painful in how meaninglessly depressing it is, and raises too many questions.

For example, what is the need for the hero to be so masochistically self-sacrificing when he can just come up with some other reason for being in the brothel, if the only reason that he cannot tell the truth is that it will hurt her, and not because he did anything wrong? He is anyway lying by not telling the truth. Then, why does Anjali never ask him – the person she is actually planning to marry – for his side of the story before breaking up? And why does the girl’s father not leave a note spelling the truth and saving Raju’s reputation, if he is anyway going to kill himself out of repentance?

That’s just a few – this is just a shabbily written movie script with no effort to make all parts stick, with the result that you are constantly frustrated by the happenings on screen. An hour of this can be painful. Then, there are 2 heartbreak songs, some ranting by Anjali just before her father dies, and a sudden and inexplicable change of heart in the villian in the climax. And an unnecessary item number in what is otherwise at least a clean movie.

While Manoj is pretty decent, Sheela is not the greatest actress you’ve seen. All other performances are professional. The film has the entire pantheon of comic actors – Brahmanandam, Ali, M S Narayana, Raghubabu, Suman Shetty, Dharmavarapu… – and has its fair share of laughs in one half. The music is average stuff.

Rajubhai is worth a watch if you are celebrating buying a new recharge card for your mobile or something, but any better occasion deserves a better movie.
Share. Save. Connect.
Tweet
RAJU BHAI SNAPSHOT

ADVERTISEMENT
This page was tagged for
Raju Bhai Telugu movie songs 320kbps
raju bhai full movie telugu
Raju Bhai telugu movie
Raju Bhai reviews
release date
Follow @fullhyderabad
Follow fullhyd.com on
About Hyderabad
The Hyderabad Community
Improve fullhyd.com
More
Our Other Local Guides
Our other sites
© Copyright 1999-2009 LRR Technologies (Hyderabad), Pvt Ltd. All rights reserved. fullhyd, fullhyderabad, Welcome To The Neighbourhood are trademarks of LRR Technologies (Hyderabad) Pvt Ltd. The textual, graphic, audio and audiovisual material in this site is protected by copyright law. You may not copy, distribute, or use this material except as necessary for your personal, non-commercial use. Any trademarks are the properties of their respective owners. More on Hyderabad, India. Jobs in Hyderabad.