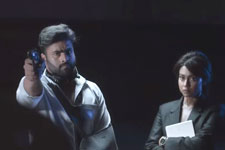 Sonali Dabade / fullhyd.com
EDITOR RATING
2.0
Performances
Script
Music/Soundtrack
Visuals
2.0
2.0
2.0
2.0
Suggestions
Can watch again
No
Good for kids
No
Good for dates
No
Wait to rent it
No
Crime thrillers are a niche that need good vision in execution at the least. Every element of the movie needs to be planned precisely, and most importantly, the importance of its inclusion well-debated and well accounted for. Veera Bhoga Vasantha Rayalu instead sees multiple tracks and multiple crimes brought together and mixed haphazardly, and the result is a horrifying train wreck of a movie. It's funny how the mention of a second coming of God can make you take the Lord's name to make it stop.

Veera Bhoga Vasantha Rayalu has multiple tracks, and starts off with a montage of atrocities against women, one that is unnecessarily slo-mo. One track has a boy coming to a police station where Vinay (Sudheer Babu) is the Inspector, claiming that his house has disappeared. Another shows a plane carrying 300 people, including Indian cricketers, hijacked by someone (Sree Vishnu) who wants the lives of 300 criminals in exchange for those of the passengers. Chief investigating officer Deepak Reddy (Nara Rohit) and Inspector Neelima (Shriya Saran) need to solve this case to save the lives of those innocent people. And in yet another track, orphans and poor girls are being kidnapped from marketplaces.

All the characters here are part of a larger story, one that you will have sit through two hours of the movie to find out. What this end is, and whether it will justify the painful experience of sitting through this movie are just two questions that occur to you as you wait to find sense in the film.

Where do we start with what exactly is wrong with Veera Bhoga Vasantha Rayalu? Everything is off about it. The script wants the movie to be an amazing crime thriller, but the screenplay lets it down immensely. It shudders and jerks, wanting to be a great movie but falling short by miles. There's just too much for it to handle - too many plots that just turn into a wobbly mess when they come in contact with each other. The dialogue is also strained, trying hard to be coolly funny and looking like it wants to be in Hollywood league but ending up as a bad parody. And the direction is horribly below the bar.

While the direction and the acting prick at the senses, it also doesn't help that you've seen all of the elements from this bumbling hotch-potch before. A righteous policeman investigating a neighborhood crime? Check. Two investigating officers (one of whom has a broken hand for reasons unexplained) trying to fight an unknown "national" threat? Check. A criminal who wants to cleanse the world of criminals? Check.

Such apparently intense characters and situations coming together indeed has the potential to make a cracker of a crime thriller. But all they do here is painfully bounce off of each other to bring a drab movie to a rather irksome conclusion.

There is scope for good, if not great, performances in this tale, but everything is crashing and burning in this movie, and the acting is no exception. Nara Rohit is handsome and fits the bill as a police officer, but he's as stoic as stoic can get. Sudheer Babu is unnecessarily brooding and feels like he hasn't even made an attempt to understand what's going on. Shriya Saran's dialogue delivery hasn't improved in the scores of years she has been in the Telugu film industry. If anything, this movie brings out the bad side of her acting.

The worst of all is Srinivas Reddy's character, constable 403. He is the most natural of all the actors, but his character is made to fit the constable stereotype forcibly. As though constables are born to be dumb and ignorant of the most obvious things around them. For example, at one point in the movie, he falls through a wall and lands between two dead bodies. When the others signal for him to look beside him, he looks upwards and says "where?" in an exasperating way.

The bad saga also features unnecessary slo-mo shots that instead of adding intensity to the film only make it more ridiculous. To add to it, there are supposedly artistic cuts that are anything but, that make the movie that much more painful. Even a layman can tell that scenes such as those are completely unnecessary, repetitive even.

The entire experience - if you can call it that - is worsened by the below average music and background score. It is merely jarring and only adds to the unwelcome chaos. The credits song is like a bad copy of the theme song from Awe. 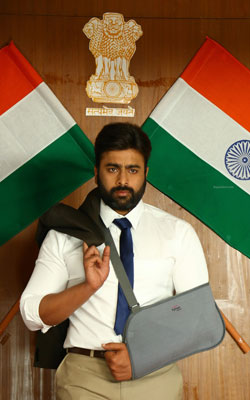 ADVERTISEMENT
This page was tagged for
Veera Bhoga Vasantha Rayalu telugu movie
Veera Bhoga Vasantha Rayalu reviews
release date
Nara Rohit, Sudheer Babu
theatres list
Follow @fullhyderabad
Follow fullhyd.com on
About Hyderabad
The Hyderabad Community
Improve fullhyd.com
More
Our Other Local Guides
Our other sites
© Copyright 1999-2009 LRR Technologies (Hyderabad), Pvt Ltd. All rights reserved. fullhyd, fullhyderabad, Welcome To The Neighbourhood are trademarks of LRR Technologies (Hyderabad) Pvt Ltd. The textual, graphic, audio and audiovisual material in this site is protected by copyright law. You may not copy, distribute, or use this material except as necessary for your personal, non-commercial use. Any trademarks are the properties of their respective owners. More on Hyderabad, India. Jobs in Hyderabad.