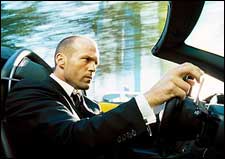 Priyanka Pulla / fullhyd.com
EDITOR RATING
6.0
Performances
Script
Music/Soundtrack
Visuals
NA
NA
NA
NA
Suggestions
Can watch again
NA
Good for kids
NA
Good for dates
NA
Wait for OTT
NA
Traditionally, even the most undiluted action movies used to be troubled to think up some logic to explain their lawless (both physical and legal) acrobatics. Some really good logic, I might add - sometimes the logic itself was half the fun, sometimes all, but in all the cases it was the logic that sorta held together the fabric of the movie. Without the logic, it was shreds.

Matrix had a computer program, Crouching Tiger had martial-arts, Terminator had futuristic tech, and True Lies simply had a very strong man. And oh yes, Austin Powers had a goofball who made us laugh. But these are traditional movies, old-timers, conformists.

Transporter 2 is a big, bold breakway that takes off from the lip of a gorge without a parachute, a lot like its protagonist does all the time. There is a scene of a car driven by Frank Martin (Jason Statham) that flies off a driveway and does a somesault in the air to knock a bomb off from underneath itself by scraping against a crane hook suspended above. There is another where he transfers himself into a plane, simply by driving at light-speed into the underbelly of the plane as it is taking off.

He rides a sea-cycle onto a road into a bus and pops in, and he uses fire extinguisher to trip, lasso and whip his villians with the dexterity of a Hose-kwondu specialist. Basically he can work everything from a hose, a car, a knife, a gun, his tie, coconut shells and, of course, his own arms and legs. It must be a splendid sort of martial art that teaches you how to adapt to your purposes, every piece of trash you find on the fly.

But at the end of the day, Martin is only a Transporter. A guy who transfers a package from one address to another, no questions asked. And this time, his assignment is to drive the son of a heavyweight narcotics control policymaker from school to home and back, everyday.

There is the waif-like, amply speckled Amber Valletta playing Audrey, the child's divorcee mother, collapsing like a delicate Victorian butterfly into his arms all the time. What is a strong man, if there is no wispy maiden lying wrapped around his brawn, accentuating it?

This Transporter wears only black suits and a tie, duplicate copies of which outfit he keeps in his car trunk. On one of his daily expeditions with the kid, they are kidnapped by the fiendish Lola (Kate Nauta), in a scheme masterminded by Gianni (Alessandro Gassman). There are plans involving biological weapons to get at a rather elusive target through the child - plans as convoluted as the legendary underground tunnel mazes the Vietcong dug in the Vietnam war.

One thing leads to another, and the black and white Transporter is soon racing, zipping, slamming his way through to the enemy in a huge sequence of gravity-defying stunts. The physical fight scenes are good - it is always nice to watch a heavy-set man execute Chinese kicks and punches which you usually watch the smaller Chinese do. Here you can feel the power, the thump, and it is keeps the adrenaline reserves up.

There is quite a bit of gadgetry for gizmo freaks - cars (Audi), Glocks, cell-phones, the works. But the biggest gizmo of all is Martin. He even looks like one with his clean lines, bald head and uniform. And performs more reliably than any of them.

Transporter warrants a word of caution - if you tend at all to use your brain while enjoying an action flick, if the cerebral "figuring-out" by backtracking on a lightning-fast scene is what kicks you, you will feel rather disappointed with this movie. Cheated. Hurt.

If on the other hand you can look at it like a ride, and can hang on to the speeding just for the heck of it, no questions asked, bingo! Your weekend is made. Transporter 2 is an exclusive movie for an exclusive circle. Decide if you belong there.
Share. Save. Connect.
Tweet
TRANSPORTER 2 SNAPSHOT

ADVERTISEMENT
This page was tagged for
Transporter 2 english movie
Transporter 2 reviews
release date
Jason Statham, Alessandro Gassman
theatres list
Follow @fullhyderabad
Follow fullhyd.com on
About Hyderabad
The Hyderabad Community
Improve fullhyd.com
More
Our Other Local Guides
Our other sites
© Copyright 1999-2009 LRR Technologies (Hyderabad), Pvt Ltd. All rights reserved. fullhyd, fullhyderabad, Welcome To The Neighbourhood are trademarks of LRR Technologies (Hyderabad) Pvt Ltd. The textual, graphic, audio and audiovisual material in this site is protected by copyright law. You may not copy, distribute, or use this material except as necessary for your personal, non-commercial use. Any trademarks are the properties of their respective owners. More on Hyderabad, India. Jobs in Hyderabad.