T-Rex - Back To The Cretaceous Review 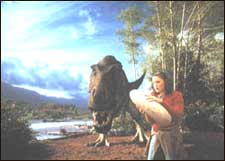 Ghazala Rizvi / fullhyd.com
EDITOR RATING
5.0
Performances
Script
Music/Soundtrack
Visuals
NA
NA
NA
NA
Suggestions
Can watch again
NA
Good for kids
NA
Good for dates
NA
Wait to rent it
NA
Romping beasts, screaming kids, monomaniacal scientists... if you are looking for a fiery cruise down the adrenaline-pumping road, go to the nearest theater which is running one of the Jurassic Park flicks. Spielberg could do it with the nascent tech of the early 90s, and Brett Leonard, with 3D Imax, could have done it better. But T-Rex, unlike the Cretaceous monster, fails miserably in engendering the fear, the thrill, or even the keeping-you-awake factor.

T-Rex is the story of, no, not T-Rex, but one Ally Hayden (Liz Stauber), an unbelievable 16-year-old paleontology freak. More unbelievable than Stauber portraying a teen, is the fact that she inhales fumes emanating from a paleontology find, and hallucinates back into time.

The Museum Of Natural History, where her father works, now comes alive with the bony T-Rex making a cameo appearance in flesh, before Ally is miraculously transported to the forests of North America. Her sojourn in time is interrupted by a group of Hadrosaurs drinking water circa 65 million years ago, by Charles Knight (Tuck Milligan) painting his famous Deinonychus-picks in 1920, and by Barnum Brown (Laurie Murdoch), the renowned bone-digger of 1910, digging, well, bones.

Amid these pleasant intrusions, she also keeps coming back to the Museum and calling out for her father, Donald Hayden (Peter Horton), a famous paleontologist. All this time you wait patiently for the lead man to make an appearance. If allowed, or alive, T-Rex certainly has a case for demanding more screen presence in a movie that is being run in its name. Finally, you do get to have a fleeting 3D glimpse of the giant carnosaur, right before Ally returns to sanity, and the movie lingers off to its end without firing your fear or imagination.

Though inevitable, the comparison with the Jurassic Park trilogy is not justified. The previous movies were made with a purpose - to give hardcore entertainment while making a billion dollars apiece. T-Rex, on the other hand, touches upon the nitty-gritty of being a paleontologist, and portrays the behind-the-scene hardships and the occupational hazards. It thus tries to provide an alternate perspective, a goggled eye view, on the subject.

And all this it attempts to do with minimum of effort, as far as direction, if not visual effects, is concerned. Where it fails is in presenting a well-seamed plot, which could have formed greener ground for recreating the Cretaceous era.

The film is insipid, paying put to all rationale of story narration and acting, but mostly because its special effects do not do justice to the IMAX 3D. The magnificent animals, your excuse for being inside the theater, are too shy to make an adequate appearance in this flick.

While you are looking for an intimate rendezvous and a personal interaction with the dinosaurs, you are instead fed on an overdose of the moss-green Olympian rain forests of Washington State. A crude presentation of the evolution of paleontology, and meek references to ethical and technical issues relating to this field, form the backdrop where you would have preferred closer encounters with the beasts.

When Michael Crichton penned his dino-paean, he would never have dreamed that one day his pet theme would not only fail to jar viewers, but would also actually bore them. Despite the 3D effect, T-Rex lacks luster, pace and story. You can watch it if it's your first 3D experience and if you want to get the feel of the tech. The film doesn't contain the ammunition that could show-off the 3D magic or do justice to your paying the 180 bucks.
Share. Save. Connect.
Tweet
T-REX - BACK TO... SNAPSHOT
T-REX - BACK TO THE CRETACEOUS SNAPSHOT

ADVERTISEMENT
This page was tagged for
T-Rex - Back To The Cretaceous english movie
T-Rex - Back To The Cretaceous reviews
release date
Peter Horton, Liz Stauber
theatres list
Follow @fullhyderabad
Follow fullhyd.com on
About Hyderabad
The Hyderabad Community
Improve fullhyd.com
More
Our Other Local Guides
Our other sites
© Copyright 1999-2009 LRR Technologies (Hyderabad), Pvt Ltd. All rights reserved. fullhyd, fullhyderabad, Welcome To The Neighbourhood are trademarks of LRR Technologies (Hyderabad) Pvt Ltd. The textual, graphic, audio and audiovisual material in this site is protected by copyright law. You may not copy, distribute, or use this material except as necessary for your personal, non-commercial use. Any trademarks are the properties of their respective owners. More on Hyderabad, India. Jobs in Hyderabad.