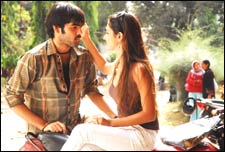 Ravi Mundoli / fullhyd.com
EDITOR RATING
6.0
Performances
Script
Music/Soundtrack
Visuals
NA
NA
NA
NA
Suggestions
Can watch again
NA
Good for kids
NA
Good for dates
NA
Wait to rent it
NA
First things first: Jagadam has all the usual problematic themes that run through many movies in this kaliyugam. The exaltation of a violent lifestyle, the objectification of women, the inaction of official machinery, the glorification of cigarettes and alcohol, and the differentiation of cubic functions, all are found in liberal dollops. Well, except the last one – we just threw that in there to check if you were actually still reading the sentence.

If you go into the theater expecting a poignant story, sensitively told, and ultimately meaningful, you may be disappointed. But if you take care to leave that part of your mental makeup outside, you might just end up having a reasonably good time.

Seenu (Ram) grows up in a small family of modest means. Right from his childhood, he learns that might is right, that people respect only the strongman, and that learning to use his fists could potentially be a viable career move. The way other kids idolize sportspersons, Seenu idolizes the lumpen elements in his neighborhood, the most lumpy one being Manickam (Pradeep Rawat).

Seenu and his gang go about their merry way quarreling with other smalltime gangs, chasing girls, and indulging in certain liquid and gaseous vices. Like all youngsters, they’re ambitious and have dreams for the future, except that these guys chiefly dream about moving into the big league where they can use more sophisticated technologies such as knives and guns.

The gang comes to the attention of Manickam, who, like all self-respecting goondas, now wants to take the next logical step and move into politics. Soon, the gang is doing minor “jobs” for Manickam and his right hand man Laddu (who looks the part). As Seenu & Co. become more and more important, a feud of sorts starts simmering between him and his erstwhile mentor Laddu.

Subbalakshmi (Isha Sahani), the love of his life, gets Seenu involved in a land usurpation issue that forces him into a path of confrontation with Manickam. Seenu meanwhile has learnt a few things, one of the important ones being that there’s always a bigger fish. If Laddu dances to Manickam’s tune, Manickam himself is beholden to the local MLA, PVR (Tanikella Bharani).

As far as story goes, Jagadam isn’t all that unusual. One faction of an organization pitted against another; ambitious, demanding employees trying to protect their own turfs resulting in headaches for the management etc. etc.

The thing that makes it different from Dilbert is the sheer pace and raw energy that permeates Jagadam. There isn’t a let up anywhere, no unnecessary comedy tracks on the side, no dawdling in labyrinthine plots. As the gang goes from one situation to another, you barely have time to catch your breath, let alone reflect on what happened. When the interval comes around, you say a quiet prayer of thanks, but even this break is ominous because the screen appropriately says “Interruption” instead of “Interval”.

Ram does a very good job as Seenu – he’s got the young canine look of innocence when he needs it, but also radiates malevolence when required. Special mention to the rest of his gang for being so loyal and entertaining. Pradeep Rawat is menacing as Manickam.

The rest of the cast doesn’t have a whole lot of screen time. Isha Sahani is new and cute, but that’s about all she has to be. Prakash Raj has a tiny role as a top cop, remarkable mainly for the scene in which he draws a flowchart on a whiteboard to explain to Seenu why crime is bad – perhaps a first in Indian cinema. The story is crisply told, and the songs pulsate in sync with the tempo of the rest of the movie (you can’t have missed 5 feet 8 inches).

Perhaps the biggest reason why Jagadam works has nothing to do with the acting, or the music, or the direction, or any of the million humdrum things that go into the making of a movie. It owes its thanks to physiology, in the form of a gland located near the kidney. Adrenaline is what Jagadam relies on, and the cast and crew can take a bow for successfully getting it flowing at all the right times.

Maybe we were too hasty in judging Jagadam as glorifying violence. After all, in the second half there is a completely unexpected twist that blindsides you, and in the end there is a message that might end up striking a chord. Catch Jagadam if you can – you might have fun and it might leave you thinking.
Share. Save. Connect.
Tweet
JAGADAM SNAPSHOT

So, you purely rate the movies on how the telugu audience will like it. You don't have a conscience. Hmmm..FYI, there are 'n' number of reviewers out there who rate for telugu audience and don't pretend otherwise. Where as you fake!!

ADVERTISEMENT
This page was tagged for
jagadam full movie
Jagadam telugu movie
Jagadam reviews
release date
Ram, Isha Sahani
Follow @fullhyderabad
Follow fullhyd.com on
About Hyderabad
The Hyderabad Community
Improve fullhyd.com
More
Our Other Local Guides
Our other sites
© Copyright 1999-2009 LRR Technologies (Hyderabad), Pvt Ltd. All rights reserved. fullhyd, fullhyderabad, Welcome To The Neighbourhood are trademarks of LRR Technologies (Hyderabad) Pvt Ltd. The textual, graphic, audio and audiovisual material in this site is protected by copyright law. You may not copy, distribute, or use this material except as necessary for your personal, non-commercial use. Any trademarks are the properties of their respective owners. More on Hyderabad, India. Jobs in Hyderabad.