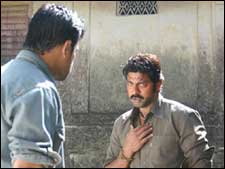 EDITOR RATING
5.0
Performances
Script
Music/Soundtrack
Visuals
NA
NA
NA
NA
Suggestions
Can watch again
NA
Good for kids
NA
Good for dates
NA
Wait for OTT
NA
Even before Rajnikant was invented, movies had seen almost all kinds of chases, ranging from the routine ones in cars and bikes to those in bullock carts, motorboats, autos and even the occasional cycle-rickshaw. Rajnikant, of course, pushed the frontiers of self-belief, and moved to chasing sitting on tractors, camels, birds, bullets, and even wheelchairs. Basically, if it could be sat upon, he chased sitting on it.

The one thing that all movies, including Rajni movies, missed out on as a chasing option, however, Sivakasi seizes upon. The scene is standard – the driver has just parked his vehicle by the side of some woods and is taking a relaxed leak, when our heroes sit in it, turn the key, put it in gear, and take off. Only, this is a rail engine here.

And you can’t but help feel sorry for the driver – I mean, which cop will take you seriously when you call and tell him that your rail engine was stolen? Plus, the first thing he’ll ask you is the number, and if you tell him that your vehicle has never had a nameplate, you are as screwed as the thief.

But we are getting ahead of ourselves – that scene is in the climax, and it is in the climax for a reason: so that reviewers can talk about it in the last paragraph. So let’s talk about the story in the order in which it is narrated. Kasi (Arjun) comes to Mumbai after 20 years to avenge the brutal murder of his parents. Most movie heroes do it earlier than that, but Kasi is lazy and has the bad habit of procrastinating.

Kasi does not finish off the job in one shot even when all the three villians are lined up unarmed in front of him – like we just said, he’s too lazy to even pull the trigger thrice continuously. So he has to stay back in Mumbai to finish off the third villian who’s run away totally bored of waiting for him to fire.

He stays in Dharavi in a chawl, and one day when some villians come threatening the residents to sell their flats, he beats them up, without realizing that they are henchmen of the evil, powerful Ravi. When he does realize it, he’s unsure of what to do, and so beats them up again. The men are fed up and want him to at least revert to not realizing it, but Ravi, who is smarter, just recruits him.

Siva (Jagapathi Babu) is the top henchman of Mani, another mafia boss and Ravi’s primary enemy, and Kasi and Siva keep masterminding moves for their bosses against each other. But when Mani’s son once gets Siva’s brother beaten up, Siva rebels, and leaves without serving out his notice period. This pisses Mani off, and he complains to the police. No, not about the notice period thing, but about all the crimes Siva committed. Siva starts getting hunted, and he can turn to only one person for help now.

The primary problem with Sivakasi is a pedestrain script. A good gangster movie shows either a rise or a downfall (or both), through a mixture of deep characterization, and deft manipulation or mishandling by the protagonists of completely plausible events. Sivakasi has no calculated build-up to a grand finale – it is just a sequence of moves and counter-moves, and they are not brilliant either.

There are attempts at characterization – Arjun’s flashback, Jagapati’s brother and wife etc. – but they need a better thinker and a better screenplay writer. The dialogues are ordinary and the acting is just above average – Jagapathi’s looks are his biggest asset, and his dialogue delivery evokes dispassion – and the film on the whole seems like too little put into too much time.

The female leads seem like add-ons, not ingredients, and the songs like interruptions. Most of the film is shot in Mumbai, and the visuals warrant no special mention – they’re standard.

On the whole, this may not be the best bet for this weekend.
Share. Save. Connect.
Tweet
SIVAKASI SNAPSHOT

ADVERTISEMENT
This page was tagged for
Sivakasi telugu movie
Sivakasi reviews
release date
Arjun, Jagapati Babu
theatres list
Follow @fullhyderabad
Follow fullhyd.com on
About Hyderabad
The Hyderabad Community
Improve fullhyd.com
More
Our Other Local Guides
Our other sites
© Copyright 1999-2009 LRR Technologies (Hyderabad), Pvt Ltd. All rights reserved. fullhyd, fullhyderabad, Welcome To The Neighbourhood are trademarks of LRR Technologies (Hyderabad) Pvt Ltd. The textual, graphic, audio and audiovisual material in this site is protected by copyright law. You may not copy, distribute, or use this material except as necessary for your personal, non-commercial use. Any trademarks are the properties of their respective owners. More on Hyderabad, India. Jobs in Hyderabad.