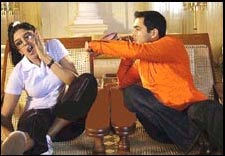 Ravi Mundoli / fullhyd.com
EDITOR RATING
3.0
Performances
Script
Music/Soundtrack
Visuals
NA
NA
NA
NA
Suggestions
Can watch again
NA
Good for kids
NA
Good for dates
NA
Wait to rent it
NA
Abaddam reminds you of Kambli's career. It was inconsistent but showed promise. It was entertaining and disappointing. And it left you with a distinct, "Tchah, what might have been..." feeling.

As you perhaps already know, Abaddam is no run-of-the-mill production. Balachander has made exactly a 100 movies (including some landmarks) before, and launched some of the biggest names in Tamil cinema (do Rajnikant and Kamalhasan mean anything to you?). Even before the screen lights up, you almost tingle with anticipation that this one will be different, this one will stand out. To some extent, "Abaddam" lives up to those expectations. Strictly some.

Vemana (Uday Kiran) is the son of Kalidas, a Vizag politician who is honest, upright and incorruptible to a fault. Unfortunately for young Vemana, his father's principles bring repercussions. Daddy will not make recommendations, Daddy will not put in a word for him, Daddy will not use his power to extricate him from trouble, and so on. Father and son do not see eye to eye, and the doting wife/mother (who Kalidas has renamed Sakuntala!) has to constantly play fireman.

When Vemana once lands in a legal soup, Kalidas refuses to help him out. His political foes then step in and assist the politically naive Vemana, in an attempt to woo him to their fold and sow discord in Kalidas' party. They succeed, and ultimately Kalidas banishes Vemana from his house.

Sakuntala and his friends advise Vemana to leave town for a few months and to come back after the storm raging in Kalidas has simmered down. And so, Vemana promptly catches the next flight to Colombo.

Well, "Abaddam" is the dubbed incarnation of the original Poi, in Tamil. While it would have made moderate sense for a Chennai bigwig's son to lie low in Colombo given Sri Lanka's large Tamil population, it certainly seems very odd for an Andhra lad from the Northern Circars to end up there. Not only just to end up in Colombo, but to also find other Telugu speaking people whom he instantly befriends. This oddity keeps manifesting itself throughout the movie, adding a somewhat jarring note to the whole theme.

In Sri Lanka, Vemana manages to find a place to say, apparently by wandering through a park in downtown Colombo, and latching onto the first Telugu speaker he runs into. When asked about his parents, not wanting to reveal his identity, he changes his name to Balu, and invents an imaginary "father" - a gruff, foul-mouthed, all-white, old man named Simhadri (played quite endearingly by the director himself).

With what is surely one of the more creative acts of storytelling in recent times, this imaginary father now starts taking over Vemana/Balu's life, and begins to play the role of a guardian angel. He recommends that Vemana finds his true love, and once that is done, advises his "son" on how best to make the damsel fall in love with him.

Which brings us to the leading lady, Shilpa (debutante Vimala Raman). A young, no-nonsense woman with an unhappy past and definite no-nonsense career goals, she is in Colombo to pursue her ambitions away from the distractions of home, and lives with her brother and his family.

Vemana decides that she is the one for him, and pursues her with tenacity. A seriously serious (to the point of irritating) amount of wooing takes place, and at the same time a host of minor characters come in and occupy their places in the tableau.

Everything is ticking along more or less smoothly for Vemana (barring the slightly problematic fact that Shilpa has absolutely no interest in him), when Fate intervenes. Quite literally.

Fate (vidhi), clad in a black suit and hat, and enacted by Prakash Raj, starts playing his games with the guardian angel. Again, quite literally. They start playing "Snakes and Ladders" with Vemana's destiny as the counter. Will fortune favor it by helping it to climb ladders and keep moving forward until it reaches square number 100? Or will Fate conspire, and cause it to fall on a square with a snake, and push it right back to square number 1? Once again, quite literally.

The remainder of the movie is devoted to answering these questions. It is the interludes between the guardian angel and Fate that truly make this movie different from the hundreds that are churned out. This is what separates the men from the boys; and the director's and the story writer's creativity and originality flourish.

Without this thread running through, "Abaddam" would have been very, very, mediocre. The fact that these roles are done by such versatile artistes as Balachander and Prakash Raj helps substantially in elevating the film.

So what exactly is the problem with Abaddam then?

In spite of its originality, the film tends to drag in places, and is long. There are too many side plots and characters that are introduced but never sufficiently explored, leaving a feeling of incompleteness.

Then, the dubbing from Tamil is perhaps successful, but you cannot say the same about the cultural and historical references. And there are far too many coincidences than you can reasonably stomach, and a few continuity issues as well.

Uday Kiran is, well, Uday Kiran. He does what he does best, and we will let it rest at that. The music is passable rather than memorable. The surprise of the movie is possibly Vimala Raman. She has to mostly express just one or two emotions, but she does it with a degree of confidence and poise, without getting overly melodramatic. She isn't your typical glam doll, but looks like she is quite capable of pulling off non-trivial, serious, mainstream roles.

For serious cinema and theater buffs, there is a surprising amount to take note of in Abaddam. At the risk of sounding very "artsy", there are shades of Ingmar Bergman ("The Seventh Seal") and Shakespeare ("Romeo and Juliet") to be found. The whole "fate" (vidhi) versus "free will" (sutradhaarudu) sequences also highlight all kinds of interesting philosophical questions.

As a comeback vehicle for Uday Kiran, Abaddam might prove to have a wet spark plug. For K Balachander, we can only hope this is not his swansong. Somewhere in there, there is a far better movie waiting to be made. Or is it a case of declaring the innings on 101 n. o.?
Share. Save. Connect.
Tweet
ABADDAM SNAPSHOT

ADVERTISEMENT
This page was tagged for
abaddam movie
Abaddam telugu movie
Abaddam reviews
release date
Uday Kiran, Vimala Raman
Follow @fullhyderabad
Follow fullhyd.com on
About Hyderabad
The Hyderabad Community
Improve fullhyd.com
More
Our Other Local Guides
Our other sites
© Copyright 1999-2009 LRR Technologies (Hyderabad), Pvt Ltd. All rights reserved. fullhyd, fullhyderabad, Welcome To The Neighbourhood are trademarks of LRR Technologies (Hyderabad) Pvt Ltd. The textual, graphic, audio and audiovisual material in this site is protected by copyright law. You may not copy, distribute, or use this material except as necessary for your personal, non-commercial use. Any trademarks are the properties of their respective owners. More on Hyderabad, India. Jobs in Hyderabad.