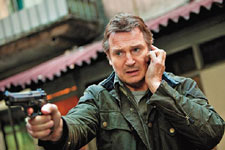 Samrat Sharma / fullhyd.com
EDITOR RATING
6.5
Performances
Script
Music/Soundtrack
Visuals
7.0
5.0
6.0
6.0
Suggestions
Can watch again
No
Good for kids
No
Good for dates
Yes
Wait for OTT
Yes
When Taken came along, it completely took the Interent by storm. And why not? It had hitherto gentle, or sometimes patriotically firebrand, Liam Neeson, finally making use of that 7-foot frame and deep, menacing voice to kick arse. A middle-aged man prepared to unleash all kinds of fury and vengeance on unsuspecting Europeans was clearly something that we had seen before, but Neeson made the role his own, forever spoiling it for middle-aged actors.

The charm, obviously, lay in Neeson's delivery of a monologue oft repeated and parodied, and his embodiment of the menace his character could be. It was a suprise, and perhaps we could have expected it to be a classic in the future too, had it not been for a sequel, that suffers from the acutest case of sequelitis.

Taken 2, for all its Neeson-peddling, is a mediocre film wrapped around a leading man's tour de force character, with nary a spark that reminds us of why the original was such a surprise. The pandering to the supposed (and incorrect) American xenophobia continues - this time his entire family is in trouble, as menacing foreigners once again try to bring harm on the innocent. The rest is all action.

Taken 2 will have you believe Albanians have huge families, when Neeson's daughter and wife join him in Turkey, where his wife and he are "taken" by them. There is something about revenge because of a couple of guys who die in the last movie, but you care as much about their motive as you did about the guys in the first one. There is a particularly inventive sequence involving his daughter following his instructions as he locates himself via urban sounds and feel, but overall this film fails to create anything that approaches the first one.

The movie's action is serviceable - Transporter 3's Olivier Megaton brings a trusted hand at the helm - but usually never inventive or surprising. There are car chases, explosions, gunfights and fist fights, almost all of them courtesy Neeson. They never feel exciting, but neither do they feel low-quality. This is safe, unexciting film-making, designed to comfort you into parting with your money. It's never bad, but never is it reminiscent of the electrifying energy that the leading man is often capable of. 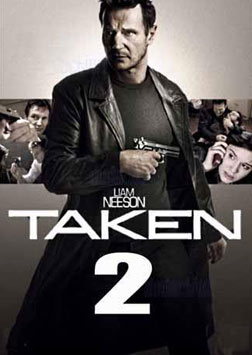 ADVERTISEMENT
This page was tagged for
Taken 2 english movie
Taken 2 reviews
release date
Liam Neeson, Maggie Grace
theatres list
Follow @fullhyderabad
Follow fullhyd.com on
About Hyderabad
The Hyderabad Community
Improve fullhyd.com
More
Our Other Local Guides
Our other sites
© Copyright 1999-2009 LRR Technologies (Hyderabad), Pvt Ltd. All rights reserved. fullhyd, fullhyderabad, Welcome To The Neighbourhood are trademarks of LRR Technologies (Hyderabad) Pvt Ltd. The textual, graphic, audio and audiovisual material in this site is protected by copyright law. You may not copy, distribute, or use this material except as necessary for your personal, non-commercial use. Any trademarks are the properties of their respective owners. More on Hyderabad, India. Jobs in Hyderabad.