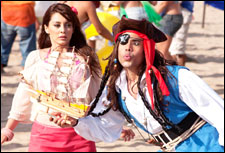 Nupur Barua / fullhyd.com
EDITOR RATING
4.0
Performances
Script
Music/Soundtrack
Visuals
6.0
4.0
6.0
5.0
Suggestions
Can watch again
No
Good for kids
Yes
Good for dates
Yes
Wait to rent it
No
Robert Graves, the English poet and novelist, once said, "There is no money in poetry, but then there's no poetry in money either." You may want to remember this when you watch Sagar Ballary's latest movie, Hum Tum Shabana. Especially when you think of the low-budget Bheja Fry that was (inspired) poetry.

Rishi (Tusshar Kapoor) and Kartik (Shreyas Talpade) are two young (at least that they carried off) event management executives, ambitious in their own way and lacking intellect to some degree. Life is good, and the 2 of them are due for a promotion, or so they think. A new boss dispels their dreams, but takes them to Goa nonetheless, for a beauty pageant.

And the two of them promptly fall in love with one aspiring model and contestant, Shabana (Minissha Lamba), a young (this she could not be convincing of) and "innocent" girl. To win her affections and to beat each other to it, Rishi and Kartik do everything they can (read: unethical measures) to get her to qualify for the final round. What the 2 idiots do not know is that Shabana is not really a helpless little girl.

The first 45 minutes of the movie look promising, and you keep hoping that the comedy will get better, but the decline begins after the first hour. Sagar Ballary seems to prefer the Golmaal and Dhamaal styles, rather than that of his first film. All logic is thrown out of the window, which does not bode well for a concept like this. The story is non-existent, and its execution even worse.

Tusshar and Shreyas are the most of the sincere of the lot, despite the overacting. Actually, the one person who keeps it together despite the lacklustre script and dialogues is Sanjay Mishra. He does what he has to, and even manages to elicit some reluctant laughter, but, as an actor, he steals scenes. Even from Satish Kaushik, who thrives on being an exaggerated, caricatured version of himself these days.

Minissha smiles, sobs, squints (in an effort to look younger, no doubt) and tries to act. Like the story, her efforts fall flat. Rumours have it that she was not too happy with the director, and vice versa, and it may have something to do with the fact that both realised later how inappropriate she was for this role.

The only glamour quotient in the movie is Pia Trivedi. She could have chosen a better debut, maybe, but she shines here. Pooja Batra's cameo does not do much for the film, however.

The music is not great, but it seems to have caught on somehow. The songs are popular, to some extent, so that is one area where the producers should be happy. Cinematography is jaded, and everything looks unreal, including (and especially) Minissha.

Hum Tum Shabana is a comedy, or so the makers claim - a feel-good movie, if you will. Indeed, you will feel good when the excruciating wait is over and the end credits roll, if you are not one of the many who walk out halfway, that is.
Share. Save. Connect.
Tweet
HUM TUM SHABANA SNAPSHOT

ADVERTISEMENT
This page was tagged for
Hum Tum Shabana hindi movie
Hum Tum Shabana reviews
release date
Tusshar Kapoor, Shreyas Talpade
theatres list
Follow @fullhyderabad
Follow fullhyd.com on
About Hyderabad
The Hyderabad Community
Improve fullhyd.com
More
Our Other Local Guides
Our other sites
© Copyright 1999-2009 LRR Technologies (Hyderabad), Pvt Ltd. All rights reserved. fullhyd, fullhyderabad, Welcome To The Neighbourhood are trademarks of LRR Technologies (Hyderabad) Pvt Ltd. The textual, graphic, audio and audiovisual material in this site is protected by copyright law. You may not copy, distribute, or use this material except as necessary for your personal, non-commercial use. Any trademarks are the properties of their respective owners. More on Hyderabad, India. Jobs in Hyderabad.