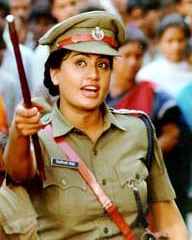 Rajasthan. Why the name Rajasthan? Because, after watching the movie, your head gets heated up like the sands of Rajasthan. R Selvamani's product is a potential migraine instigator.


To be honest, there is no story in the film but a sequence of illogical and unrealistic events. The movie opens with the Pokhran tests and India asserting itself as a nuclear power. We are now taken to Washington D C, where the Americans plan to kill Indian nuclear scientists to abort our nuclear program. They appoint terrorists of diverse nationalities to carry out the mission. These terrorists arrive through various means and at numerous points on the Indian border. A couple of them literally emerge from a beach as if they swam to India. Then they settle down assuming various facades.

Enter Sharat Kumar and Vijayshanti, both high-ranking police officials, who are engaged to each other. The director assumes that he has created a terrorist group that is beyond the reach of the existing branches of Indian Police. So he creates a new task force, with officials from various branches like the CBI, IB, State Police and BSF. Both Sharat Kumar and Vijayshanti are accommodated in the task force and Sharat Kumar is made its head. Sharat Kumar is shown as a cop who, during his stint with the BSF, single-handedly repulsed an infiltration bid by the Pakistanis.

In an operation that mainly involves investigation, analysis and strategic planning, it is surprising that Sharat Kumar is appointed by the virtue of his brawn rather than brain. The movie is replete with such logical and factual errors. Sharat Kumar driving his jeep into four feet deep water, and the police sending a female officer without pants to seduce and then nab the terrorist rather than straightaway arresting him, are just two examples of how unimaginative the director turned out to be.

Selvamani with his awful direction has made Prakash Raj look like a fool for agreeing to the cameo. It is high time that Vijayashanti, showing some mercy on the audience, decides to retire. Everyone is wasted in the film. Technically too, the film is sore. Cinematography is awry with many parts of the film being straightaway lifted from some videos. Music by Ilayaraja is blaring and its untimely appearance adds to our woes. Editing is the last straw - there is no flow in the story, and a separate comedy track never seems to be a part of the movie.

ADVERTISEMENT
This page was tagged for
Telugu Rajasthan film Telugu
rajasthan tamil movie
rajasthan movie review
rajasthan tamil movie story
Rajasthan Telugu movie full HD
Follow @fullhyderabad
Follow fullhyd.com on
About Hyderabad
The Hyderabad Community
Improve fullhyd.com
More
Our Other Local Guides
Our other sites
© Copyright 1999-2009 LRR Technologies (Hyderabad), Pvt Ltd. All rights reserved. fullhyd, fullhyderabad, Welcome To The Neighbourhood are trademarks of LRR Technologies (Hyderabad) Pvt Ltd. The textual, graphic, audio and audiovisual material in this site is protected by copyright law. You may not copy, distribute, or use this material except as necessary for your personal, non-commercial use. Any trademarks are the properties of their respective owners. More on Hyderabad, India. Jobs in Hyderabad.