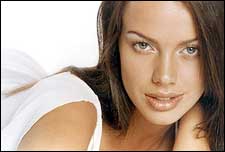 Rohit Murari / fullhyd.com
EDITOR RATING
3.0
Performances
Script
Music/Soundtrack
Visuals
NA
NA
NA
NA
Suggestions
Can watch again
NA
Good for kids
NA
Good for dates
NA
Wait to rent it
NA
Aboriginal tasks beforehand (I could just as easily have said 'First things first' but the movie has put me through enough bromide to keep off that road of prosaicism). Ilene Hamman is "grrrrooooowl", "whoof", and "mmmmm" HOT. If you are looking for any other reason to watch the movie, consult your psychologist.

With a body to die for and a face to kill for, Maya Solomon (Ilene Hamman) oozes oodles of oomph. She is a super-successful supermodel who has men eating her, err, eating out of her palms. Most of this, however, is due to her amazing style sense. Her clothes fit her like a second skin. In fact, sometimes there is so little of the fabric and so much of the skin that it takes a professional to tell if the fabric is on the skin or the skin is on the fabric.

One night, when she is suitably 'high' on cocaine, and 'on' Ali (Himanshu Malik), someone decides to shoot her. In comes super-cop Uday Singh Rathore (Irrfan) to solve the mystery. Finally! The suspense was just too much. With him around, we should definitely know the truth behind the fabric and the skin.

As if all this was not enough, we are subjected to watching a middle-aged woman, Shyamali (Shyamoli Verma), sprawled face-down on a massage table clad such that Uday's skills have to be put to use again. But this time he is assisted by Harshvardhan (Suhel Seth), a reporter friend of Maya, and his deputy Munna.

Despite two more brains assisting him, the mystery is nowhere near being solved. Uday decides that the situation calls for radical measures. He pitches a tent in her house, and spends all his time staring at her pin-up photograph and reading her diary. You begin to feel sorry for him. So much work and so little to show! Or is that supposed to be so little work and so much to show?

The movie has been made with the idea of depicting how love can be a sickness. Credit must go solely to the director for shredding that notion to pieces. Because, Maya comes back from the dead. A part of you is happy. The sensible parts are not. Uday, though, is ecstatic. He gets to woo and bed her, and in coming up with the ultimate question to the ultimate answer of life, the universe, and everything solve the mystery!

ADVERTISEMENT
This page was tagged for
Rog hindi movie
Rog reviews
release date
Irrfan, Ilene Hamman
theatres list
Follow @fullhyderabad
Follow fullhyd.com on
About Hyderabad
The Hyderabad Community
Improve fullhyd.com
More
Our Other Local Guides
Our other sites
© Copyright 1999-2009 LRR Technologies (Hyderabad), Pvt Ltd. All rights reserved. fullhyd, fullhyderabad, Welcome To The Neighbourhood are trademarks of LRR Technologies (Hyderabad) Pvt Ltd. The textual, graphic, audio and audiovisual material in this site is protected by copyright law. You may not copy, distribute, or use this material except as necessary for your personal, non-commercial use. Any trademarks are the properties of their respective owners. More on Hyderabad, India. Jobs in Hyderabad.