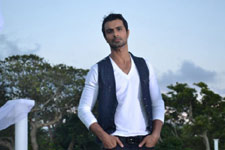 Nupur Barua / fullhyd.com
EDITOR RATING
3.0
Performances
Script
Music/Soundtrack
Visuals
4.0
3.0
4.0
5.0
Suggestions
Can watch again
No
Good for kids
No
Good for dates
No
Wait to rent it
No
If your idea of a super model includes Veena Malik, then you probably deserve this movie, which cannot justify its existence. Rumour has it that Ashmit Patel and Veena Malik were not on speaking terms towards the end of shoot, since (one presumes) their affair had lost its sparkle. The makers, of course, tried to cash in on the chemistry that was evident in the Bigg Boss house, but reality struck, and then it was too late.

If the narrator (Jackie Shroff) is to be believed, every small-town girl wants to make it big in Mumbai. Lines are blurred between their ambitions - one may want to become a screen heroine, but will settle for an identity as a super model, or vice versa, or many other similar options. And since girls with big dreams have to "compromise", they are all morally loose (smoking, drinking, sleeping around, learning how to be manipulative, etc.) and not to be trusted.

Enter Rupali (Veena Malik), who defies her family and pouts her way through casting agencies to get somewhere. She is eventually selected for a calendar photo shoot for a wine magnate (Harsh Chhaya).

They move to Fiji for this project, and since the place is synonymous with bikinis and booze, you need a playboy photographer. This is where Monty (Ashmit Patel) fits in. He loves his body, and shows it off as often as he can (maybe in an effort to intimidate the other female supermodels).

Before you can say "Bigg Boss", people are killed. And all fingers point to Rupali - and that is expected, given her erratic, schizophrenic behaviour.

Monty is instantly attracted to this rather weird supermodel, and goes from flirty Monty to "Majnu" Monty (strange are the ways of the heart). Rupali pouts a little more, wears weird clothes, and her behaviour becomes more bizarre. At times, the various characters (at least the ones who are still alive) remember that the murders have to be solved.

One is not sure how and why the makers came up with the inexplicable notion that Veena Malik and Ashmit Patel deserved a movie (unless you factor in the Bigg Boss angle, as mentioned above). And then to make it a whodunit - that is a brilliant example of misplaced notions of intellect.

The entire screenplay revolves around Rupali strutting her stuff, murders be damned. The scriptwriter goes on a preaching spree - a man can do as he pleases, but a woman has to keep it together for the sake of honour. The dialogues only emphasise this "Indian" thought further, and we are made aware of the horrors that a fallen woman has to live (or die) with. Many hours later (or so it seems), this crime-thriller-slash-murder-mystery-slash-psychological-drama mercifully ends.

The actors, if that what they are claiming to be, are definitely in the wrong field. Ashmit Patel has slightly more experience than Veena Malik, but both fail to stimulate your senses. With Veena Malik, one is never sure if she is being herself, or acting, so she comes across as a bit more convincing than the rest of her co-stars.

One wonders what Jackie Shroff is doing here, but then he disappears after a point, so maybe he was wondering, too. Harsh Chhaya has perfected the art of sleaze, and he should audition for a few low-budget movies now.

To call Super Model a B-grade movie is an insult to the sensibilities of B-grade filmmakers. It is actually a confused film that wanted to showcase some sex, and was maybe inspired by Madhur Bhandarkar's Fashion (which is not exactly the classic that most people claim it is).

One cannot go wrong with a location like Fiji, but Navin Batra manages to mess up his cinematographer's head enough to make the movie look like a bad MTV reality show. The production and costume designs are so shoddy that you will cringe in embarrassment. As for the music, the less said the better.

Remember, you cannot blame the world for watching Super Model. You are, after all, an adult (presumably) who willingly bought a ticket to the film after watching the promos. Yes, you will get a headache of migraine proportions, but, as mentioned above, you deserve it if you want to watch Veena Malik on screen.
Share. Save. Connect.
Tweet
SUPER MODEL SNAPSHOT 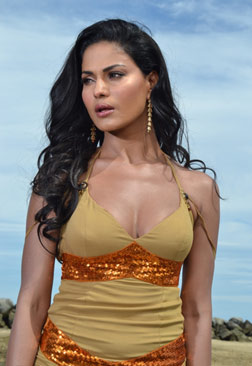 ADVERTISEMENT
This page was tagged for
hindi model photo
www MODEL PHOTO
Super Model hindi movie
Super Model reviews
release date
Follow @fullhyderabad
Follow fullhyd.com on
About Hyderabad
The Hyderabad Community
Improve fullhyd.com
More
Our Other Local Guides
Our other sites
© Copyright 1999-2009 LRR Technologies (Hyderabad), Pvt Ltd. All rights reserved. fullhyd, fullhyderabad, Welcome To The Neighbourhood are trademarks of LRR Technologies (Hyderabad) Pvt Ltd. The textual, graphic, audio and audiovisual material in this site is protected by copyright law. You may not copy, distribute, or use this material except as necessary for your personal, non-commercial use. Any trademarks are the properties of their respective owners. More on Hyderabad, India. Jobs in Hyderabad.