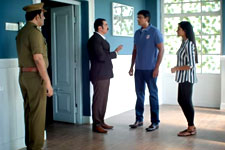 Chaitanya Karthik / fullhyd.com
EDITOR RATING
3.0
Performances
Script
Music/Soundtrack
Visuals
2.0
1.0
6.0
5.0
Suggestions
Can watch again
No
Good for kids
No
Good for dates
No
Wait to rent it
No
When you go to the theatre to watch a horror movie, what are your expectations? A riveting story, characters that you can relate to and empathize with, a haunting background score, and most importantly, the chills. Let's say you don't really expect much from the horror genre and you want to keep your expectations pretty low. Which of those above would you discount? With Aviri you could be willing to compromise on pretty much all of them, and you would still be disappointed.

Like in most horror movies, the story begins with a family moving to a new house - the house that Rajkumar Rao (Ravi Babu) and his family move to in Aviri looks pretty much like the one in Avunu, and you get a sense of déjà vu. Rao's elder daughter has died of an asthma attack, and his younger daughter has the same condition. Right after they move into the new house, the daughter (Sri Muktha) starts talking to an invisible spirit and starts acting all weird. What the spirit does and how it ties up to the family forms the rest of the story.

The story "progresses" at an excruciatingly slow pace, and while it is not necessarily a bad thing, there isn't anything of significance happening. Given that this is a horror template that has been used umpteen times, you would expect that the movie would offer you something refreshing as far as the viewing experience is concerned. But there is nothing in Aviri that keeps you hooked on to the screen or tickles your curiosity. The characters themselves are so badly written that it's hard to empathize with any of them. You don't even feel bad for the little girl who has the lung condition and is talking to the spirit in almost every frame she appears.

There are no scares in this movie either. Forget chills and thrills, there isn't one moment where you can even take the spirit seriously - not even when it possesses the wife (Neha Chauhan). In fact, it goes from being slightly comic to downright ridiculous. Then, neither the atmosphere nor the props create an eerie ambience, something that is fundamental for horror movies. Also, with all the gadgets shown in the movie, you would think that they would be used in some way to create great moments. But that never really happens. They're just there, and at one point you feel that you're watching a Naaptol advertisement.

The performances of the actors leave you scratching your head. You would expect someone like Ravi Babu to perform effortlessly but he's the one who disappoints the most. None of the emotions he shows has any air of authenticity to it, and it feels like he's desperately trying to act but doesn't have the skills. He fails even with the direction. Another difficult performance to watch is that of Bharani Shankar, who plays the role of "that guy" in a horror movie who understands everything about spirits. He is a doctor who has exorcised a ghost by stubbing a cigarette on the forehead of the possessed. Yes, you read that right. Apart from Sri Muktha, not one actor in this movie can claim that they've done a decent job.

The background score sounds like it was recorded for another movie but ended up getting used for this one - what you see and what you hear feel so much at odds with each other. On its own the music is good, but it fails to elevate the movie or enhance the moments. The screenplay, just like the story and everything else related to the movie, looks like it was retrieved from a trash can.

The only good thing about Aviri is the intermission. The movie that fails in every single department, and there is no reason you should waste your time on this.
Share. Save. Connect.
Tweet
AAVIRI SNAPSHOT 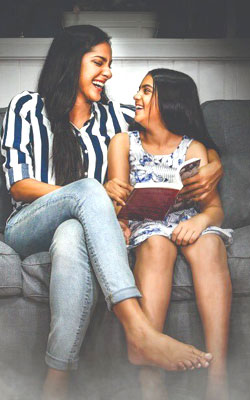 ADVERTISEMENT
This page was tagged for
aviri telugu
aviri telugu movie review
aviri telugu movie
aaviri telugu movie review
Aaviri telugu movie
Follow @fullhyderabad
Follow fullhyd.com on
About Hyderabad
The Hyderabad Community
Improve fullhyd.com
More
Our Other Local Guides
Our other sites
© Copyright 1999-2009 LRR Technologies (Hyderabad), Pvt Ltd. All rights reserved. fullhyd, fullhyderabad, Welcome To The Neighbourhood are trademarks of LRR Technologies (Hyderabad) Pvt Ltd. The textual, graphic, audio and audiovisual material in this site is protected by copyright law. You may not copy, distribute, or use this material except as necessary for your personal, non-commercial use. Any trademarks are the properties of their respective owners. More on Hyderabad, India. Jobs in Hyderabad.