Gabbar Is Back Review 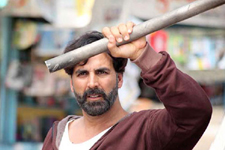 Zehra Abbas / fullhyd.com
EDITOR RATING
7.0
Performances
Script
Music/Soundtrack
Visuals
7.0
6.0
6.5
6.5
Suggestions
Can watch again
No
Good for kids
No
Good for dates
No
Wait for OTT
No
Gabbar Is Back, a Tagore remake (okay, Tagore itself was a remake of the Tamil Ramanaa), is such an out and out masala film that it should come with a health warning for dyspepsia. A one-man show from start to finish, it's a treat for Akshay Kumar fans who enjoy watching him barrel his way through "massy" dialogue, thumping action, stock characters, and the mandatory item number. If you're looking for substantial, cerebral cinema with a message, steer clear. But if you're in the mood for escapist fun, then by all means hold on tight to your Pepto-Bismol, and let's take a closer look at Gabbar Is Back.

Set in Maharashtra, the film opens with the sensational kidnapping of 10 corrupt tehsildars, one of whom is found hanging from a lamp post the next morning. In between mouthfuls of samosa and slurpy sips of tea, the bumbling police force realizes that it is up against a vigilante organization headed by the eponymously named Gabbar (Akshay Kumar).

At this point, director Krish should have flashed a sign at the bottom of the screen that read "Please suspend your disbelief immediately for further viewing pleasure. Thank you." With staggering ease, Gabbar and co. take out one corrupt official after the other. When he's not terrorizing babus in safari suits, Gabbar aka Professor Aditya teaches Physics in National College, supplementing theory classes with practical demonstrations of tension, compression, bending etc. on conveniently available baddies. He also makes time to romance Shruti (Shruti Haasan), who rattles off facts from Google ad nauseam. What is it with men named Gabbar and annoying women? (Think Basanti). Please take a Digene so that I may continue.

Things come to a head when Gabbar's actions bring him face to face with an old nemesis, Digvijay Patil (Suman Talwar). This, right here, is the main villain. Is he a bandit? A serial killer? A don? No - he's a builder. Okay, fine - a real estate tycoon. The horror. Patil's favourite line, which he says over and over again, is "I am a brand!" When Gabbar finally shouts back, "Gabbar is a bigger brand!" you want to ask both gentlemen to dial down the testosterone and remind them that even Hajmola is a brand. That reminds me, please pop two Hajmola pills and we'll proceed further.

As Patil closes in on Gabbar, more trouble rears its head in the form of CBI officer Pahwa (Jaideep Ahlawat) and constable Sadhuram (Sunil Grover). The latter is the only man with the smarts to see through Gabbar's (transparent as a glass) modus operandi. Two hours and fifteen minutes later, Gabbar Is Back ends the way it began - chock-full of implausibility.

Akshay Kumar looks fit and he looks fine, thus catering to both male and female fans. His work, in this movie and others, too, shows a mind cannily aware of his strengths and weaknesses and a great determination to capitalize on the former. All snobbish pretensions aside, you have to admire the niche that Kumar has created so painstakingly for himself. Gabbar Is Back falls neatly into its ambit.

Shruti Haasan is a talented actor, but in this film she is required to play the ditzy heroine who provides comic relief, and is basically reduced to a pretty, pouty prop. Kareena Kapoor Khan makes a cameo and looks suitably gorgeous while poor Chitrangada Singh, once touted as the thinking man's sex symbol, does a desperately bawdy item number.

Sunil Grover, better known as Gutthi from Comedy Nights With Kapil, is a pleasant surprise - he has real screen presence, and will go far if good roles come his way. Suman Talwar and Jaideep Ahlawat don't waste their energy on restraint, and their over-acting is a pain for your ears and for your sensibilities.

The action choreography is fun and whistle-worthy stuff in places. Thanks to Khiladi Kumar, the stunt sequences look believable and pack a punch. One incongruity is worth pointing out - a strange fight between Gabbar and Patil. In the WWE universe, it would have been billed "The Paunch versus The Pugilist".

The music of the film by Sandeep Chowta, Yo Yo Honey Singh, Sajid-Wajid and Chirantan Bhatt is the type you'd borrow, not buy. The song "Teri Meri Kahaani" stands out in a largely mediocre collection. The title track and "Aao Raja" are also catchy tunes.

The filmmakers have invested a lot of time and energy into the dialogue-writing of Gabbar Is Back. The lines unabashedly aim to be crowd-pleasers. Some work, some don't. "Kaam se hero, naam se villain" got catcalls and applause but a line comparing the system to a baby's diaper (let's not go there) will leave you speechless. All in all, the dialogue succeeds in sustaining the tone and tenor of the film.

The narrative drive of the movie is great in the first half but falters post intermission when certain gaps in the plot become more and more apparent. Why is Gabbar so cavalier when it comes to protecting his identity? Why didn't he go after Patil earlier, considering their history? Careful editing would have gone a long way in salvaging the film for its more critical viewers.

The central theme of the film, rampant corruption and the responsibility of the common man, runs through Gabbar Is Back, as it did in the original Ramanaa and then Tagore. It's a worthy message which gets diluted through the medium of expression - a jingoistic, violent, vigilante fantasy. So don't bother debating the practical and ethical dimensions of Gabbar's fight - just have fun with it.

And once you're done, forget all the antacids and let out a loud, appreciative burp - the highest compliment to such unapologetically masala fare.
Share. Save. Connect.
Tweet
GABBAR IS BACK SNAPSHOT 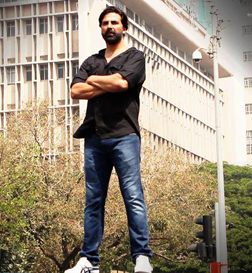 ADVERTISEMENT
This page was tagged for
gabbar is back hindi movie 720p
gabbar is back full hd movie
gabber is back movies 720p
gabbar is back movie in 720p
gabbar is back full movie
Follow @fullhyderabad
Follow fullhyd.com on
About Hyderabad
The Hyderabad Community
Improve fullhyd.com
More
Our Other Local Guides
Our other sites
© Copyright 1999-2009 LRR Technologies (Hyderabad), Pvt Ltd. All rights reserved. fullhyd, fullhyderabad, Welcome To The Neighbourhood are trademarks of LRR Technologies (Hyderabad) Pvt Ltd. The textual, graphic, audio and audiovisual material in this site is protected by copyright law. You may not copy, distribute, or use this material except as necessary for your personal, non-commercial use. Any trademarks are the properties of their respective owners. More on Hyderabad, India. Jobs in Hyderabad.