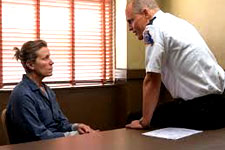 T J Reddy / fullhyd.com
EDITOR RATING
7.0
Performances
Script
Music/Soundtrack
Visuals
8.0
7.0
6.0
9.0
Suggestions
Can watch again
Yes
Good for kids
No
Good for dates
No
Wait to rent it
No
There is a specific recipe for making a good movie as most snooty critics and cinephiles will tell you. You need a few good characters. They need to have a few flaws in them. The journeys they embark on need to bring out their inbuilt flaws creating interesting conflicts. Their stories have to look visually appealing to do justice to the medium. And finally, the dialogue and score need to leave a viewer's auditory and emotional centres fully immersed. The goal of every movie that tries to be decent is to check these basic requirements off.

But as The Nostalgia Critic once so aptly said (and I'm paraphrasing here), a movie can be so good that its mastery of craft works against it and makes it average. Three Billboards Outside Ebbing Missouri is a movie that treads the line between being truly great and soul-crushingly average because of how sure-handed it is about itself.

Directed by Martin McDonagh (whose previous works include the excellent short film Six Shooter, the gut-busting and dark In Bruges, and the fantastic, self-aware, Tarantino-homage Seven Psychopaths), Three Billboards Outside Ebbing Missouri tells the tale of Mildred Hayes (Frances McDormand). Disillusioned by the fact that the police department of Ebbing, Missouri, has been unable to solve her daughter's rape and murder even after seven months of the incident, she rents out three billboards and puts up the words "Raped While Dying", "And Still No Arrests" and "How Come, Chief Willoughby?" in sequence.

This act leads to the whole town including Chief Willoughby (Woody Harrelson), Officer Jason Dixon (Sam Rockwell) and the church turning against the grieving mother. The film then follows the personal journeys of each of these primary characters (and a few secondary ones) as their lives intertwine during the course of their personal conflicts and the broader investigation.

The personal conflicts the characters face in Three Billboards are as compelling as the conflicts we had with ourselves regarding where this movie rated on our scale. Simply put, the characters, their flaws and the motivations they personally generate to make amends for those flaws are all truly spellbinding. The film has a grieving mother whose actions cause irreparable damage to others, a racist and bigoted cop who both puts innocent people in hospital or jail and sacrifices his own well-being for the sake of an investigation, and a police chief whose investigations lack results but who is a decent man and a good husband. All these characters are well-written, and the interactions between them are well-staged and highly detailed.

These characters, their conflicts, their flaws and their fulfilling journeys are some of the aspects most film purists would deem worthy of praise, and we would be in the wrong to go against their views. That being said, why isn't a movie with so much going for it as impactful as it could have been?

That can be attributed to a myriad of factors, but the primary one is the film's insistence on tying itself up in nice little bows. This narrative structure gives the audience little to no room to add their personal viewpoints to either the movie's story or its themes. While every primary character is complex and layered, the film eliminates the conflicts they induce in the viewers by having secondary characters bring their flaws to the fore and redeem them almost instantly. Like we mentioned in our Phantom Thread review, a bond between two parties (the film and the audience, in this case) can be formed only when both sides are ready to show edges that accommodate each other. Three Billboards is self-sufficient and almost too perfect to induce this feeling.

While this is the condition of the "whole", the individual parts are truly inspired. Frances McDormand as Mildred Hayes towers over almost every performance (be it male or female) of 2017. To see sweet, lovable Marge Gunderson become a spiteful, dentist-hurting, police station-burning, blasphemous badass mom is truly spellbinding.

Sam Rockwell's Officer Dixon might be the most fully realized character in the film. His character, when isolated from the film's narrative, questions a viewer's moral compass the most. This phenomenon can be attributed in equal parts to both Rockwell's performance and the script itself. Ask yourself, would you align yourself with a historically racist cop just because he had a bad day and subsequently chose to solve the rape and murder of a white girl? Food for thought.

Woody Harrelson's mild-mannered Chief Willoughby is a far cry from his turn as the manic Charlie Costello in Seven Psychopaths. While Harrelson doles out another nomination-worthy performance, his arc (except at the end) seems all too sweet, which in turn makes his being the moral axis of the film a tad hard to stomach. His character casts a long shadow on the story overall.

Peter Dinklage, John Hawkes, Abby Cornish, Lucas Hedges and most of all, Caleb Landry Jones are given opportunities to shine in their limited roles, but their reach is exactly that - limited.

Not limiting himself with the small-town setting of this film is cinematographer Ben Davis. Everything of importance that happens in the Ebbing, Missouri, occurs on the main street. Davis's lens, however, captures this one setting in multiple different ways, and in turn creates a sense of divide, dissonance and an ecosystem unto itself within a confined space. A masterful achievement indeed. A giant shoutout to the magnificent one-shot involving Dixon which is a triumph in direction, acting, effects and makeup.

The film's score, while apt, is a tad too reliant on musical tropes set by films past. They hit the highs, the lows and everything in between, but again, the music does not let the audience feel for themselves. A recurring problem that haunts the film.

It is a shame that a movie so well-made almost cannibalizes on itself at some instances, as the genius behind it is undeniable. The film has taken a life of its own in pop culture as its form of protesting has been adopted in the USA, Malta and England. Like the people organizing these protests, we here at fullhyd.com also connected to the film's unique premise and its angry characters. What we would have liked more is to have been truly moved.
Share. Save. Connect.
Tweet
THREE BILLBOARDS OUTSIDE EBBING-MISSOURI SNAPSHOT 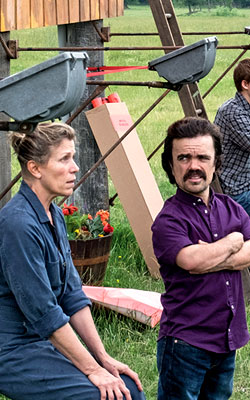 ADVERTISEMENT
This page was tagged for
Three Billboards Outside Ebbing-Missouri english movie
Three Billboards Outside Ebbing-Missouri reviews
release date
Frances McDormand, Woody Harrelson
theatres list
Follow @fullhyderabad
Follow fullhyd.com on
About Hyderabad
The Hyderabad Community
Improve fullhyd.com
More
Our Other Local Guides
Our other sites
© Copyright 1999-2009 LRR Technologies (Hyderabad), Pvt Ltd. All rights reserved. fullhyd, fullhyderabad, Welcome To The Neighbourhood are trademarks of LRR Technologies (Hyderabad) Pvt Ltd. The textual, graphic, audio and audiovisual material in this site is protected by copyright law. You may not copy, distribute, or use this material except as necessary for your personal, non-commercial use. Any trademarks are the properties of their respective owners. More on Hyderabad, India. Jobs in Hyderabad.