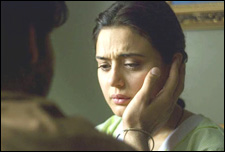 Jaiwantika Dutta-Dhupkar / fullhyd.com
EDITOR RATING
4.5
Performances
Script
Music/Soundtrack
Visuals
8.0
5.0
5.0
7.0
Suggestions
Can watch again
No
Good for kids
No
Good for dates
No
Wait for OTT
Yes
Videsh is about love and change, imaginatively plunged in fantasy and incredible Indian mysticism. It's also a film that explores female power and the female ability to communicate, even across worlds, as any "Men are from Mars, women are from Venus" fanatic could tell you as well. What this film is not about, is an understanding of domestic abuse.

Sure, the violence in Videsh is cold, hard-hitting and ugly. It's so strong on Zinta's childish frame that it makes you feel angry and horrified. Yet the violent references are made as trivially as some directors would make, say, an item song, and with the same mentality. They form a small part of the narrative in the movie, and are used primarily to contrast sensitive, romantic scenes. In fact, every scene where Zinta is battered has the effect of masochism and sexual aggression, which the filmmaker unhealthily uses to satiate the spectators' scopophilia.

The story has Chand (a pouty Zinta) working her days folding and pressing hotel napkins in a factory line in Canada next to her sister-in-law Aman and her Jamaican friend Rosa. Chand's meagre wages of labour are directly tapered off to her husband, the frustrated boy of an extremely possessive and demonic Mama.

Chand has no financial independence, is cut off from her maternal family in India, and is living in a high-stress environment where her multiple family members at her in-laws make incessant demands and constantly deride and abuse her, both emotionally and physically. Her sex life isn't rocking either, with an indifferent and insensitive husband and an over-imposing, nosey mother-in-law who won't even let Chand honeymoon in peace.

When the bruises begin to show and Chand gains sympathy at work, her friend Rosa offers her a magical root that could bring "instant love" into her life. Chand administers the root to her husband, but the results aren't really what she expects them to be, so she abandons her quest (and the frothing potion) in the backyard. And the story takes an extremely unexpected twist hereon, suddenly moving from hard reality into the fantasy realm, involving a mystical Indian legend about a King Cobra with an ability to take on any form he desires.

Perhaps Mehta's greatest achievement with Videsh is the skill and delicacy with which she traces the lines between reality and fantasy, mysticism and madness. Throughout the film, the viewer is never sure about when things are real and when they are a just a product of Chand's state of mind - it is always a pleasant ambiguity which is both elusive yet within reach.

But where the domestic abuse part is concerned, while Mehta thankfully acknowledges that it is sinful, she fails to offer any concrete alternatives to such situations. Rosa's advice to "call 911" is repeatedly turned down. Fantasy and love can be poor bedfellows to someone who seeks recognition of her basic human rights, and at the end of the film, Chand still has no control over her finances, her life or her communication, and is as powerless as ever. To an audience consisting, in part, women closely or vaguely aware of domestic abuse, and who seek hope from a modern globalised society, Mehta's latest doesn't deliver the most positive message.

Actor Vansh Bharadwaj in a double role as Rocky, Chand's husband, and as Shesh Nag (the King Cobra), her lover, is intensity personified in a performance-oriented role. His ease with the complexities of both characters is outstanding, and he literally speaks with his eyes, though his dialogue-delivery is the best you could ask for. Preity Zinta as Chand can appear jaded at times, but delivers one of her best performances.

The dialogues in the movie are good, and along with the brilliant visual metaphor typical to Mehta's films, make for some "Eureka!" moments. A lot of thought has clearly gone into the film, and it shows. Chand's character is well eked out and has considerable depth. The docu-drama feel of the cinematography is appreciable, but the frequent black and white interludes are too stylized and have a tendency to get on your nerves.

To a global viewer unfamiliar with Indian reality, Mehta's exotic Indian woman, in colorful harem pants and flowing saris, fragrant with the spices off her kitchen shelf, can be strangely tantalizing. Similarly, Chand in Videsh, with her fantastical love affair with a King Cobra, and her confined, slave-like existence, is less attractive as a symbol of abuse and more as a symbol of love. And Mehta thus sells Chand (and many unfortunate Indian women like her) not to a theatre-ful of sympathetic viewers, but to a horde of voyeurs who have cultivated an abusive interest in Indian slave-girls.
Share. Save. Connect.
Tweet
VIDESH SNAPSHOT

ADVERTISEMENT
This page was tagged for
videsh full movie
Videsh hindi movie
Videsh reviews
release date
Preity Zinta, Vansh Bharadwaj
Follow @fullhyderabad
Follow fullhyd.com on
About Hyderabad
The Hyderabad Community
Improve fullhyd.com
More
Our Other Local Guides
Our other sites
© Copyright 1999-2009 LRR Technologies (Hyderabad), Pvt Ltd. All rights reserved. fullhyd, fullhyderabad, Welcome To The Neighbourhood are trademarks of LRR Technologies (Hyderabad) Pvt Ltd. The textual, graphic, audio and audiovisual material in this site is protected by copyright law. You may not copy, distribute, or use this material except as necessary for your personal, non-commercial use. Any trademarks are the properties of their respective owners. More on Hyderabad, India. Jobs in Hyderabad.