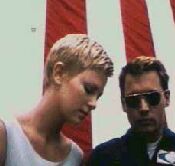 Feroz Hassan / fullhyd.com
EDITOR RATING
6.0
Performances
Script
Music/Soundtrack
Visuals
NA
NA
NA
NA
Suggestions
Can watch again
NA
Good for kids
NA
Good for dates
NA
Wait to rent it
NA
There is something about Johnny Depp. His eyes, his demeanor, his tone: they all convey a certain poise. And so does this movie, till we realize that it was all fake, that it was not going anywhere. All that happens makes us believe that we are set for something enthralling, gripping. It just peters out before you know.

Spenser Armacost (Johnny Depp) is a NASA astronaut who is on a mission to outer space. On reaching there, a satellite explosion hastens his and his partner's return. But during the incident, contact is lost with the two astronauts, for two minutes.

These two minutes remain a suspense throughout the movie. Spenser leaves his job as an astronaut and takes up the post of rocket engineer in a private firm. His partner on the trip dies under mysterious circumstances. However, his wife, Jillian (Charlize Theron), observes that things are odd with him. What exactly that is, we never know.

Spenser's NASA colleague, Sherman Reese (Joe Morton), gets to the bottom of the mystery and tries to get his findings across to Jillian. Here in lies the goof-up. Although we suspect alien involvement, the explanation offered by, and depicted onscreen is thoroughly inadequate.

In the meantime, Jillian gets pregnant with twins. Her dilemma now is whether to retain the foetus or abort it. But she gets to confront Spenser before she does anything.

As I mentioned earlier, Depp brings balance to the movie. Things never really get out of hand and there is hardly any melodrama. The director deserves credit for it. But Ravich should have done a little more groundwork. In the quest of subtlety, he ends up making things vague. I simply can't get over the lost potential of the movie.

Moreover, the climax reminds us of a classic horror film (so much for all the preceding originality). If you know the film I am referring to, then you can expect a sequel. Although, I suspect it won't come out.
Share. Save. Connect.
Tweet
THE ASTRONAUT'S WIFE SNAPSHOT

ADVERTISEMENT
This page was tagged for
The Astronaut's Wife english movie
The Astronaut's Wife reviews
release date
Johnny Depp, Charlize Theron
theatres list
Follow @fullhyderabad
Follow fullhyd.com on
About Hyderabad
The Hyderabad Community
Improve fullhyd.com
More
Our Other Local Guides
Our other sites
© Copyright 1999-2009 LRR Technologies (Hyderabad), Pvt Ltd. All rights reserved. fullhyd, fullhyderabad, Welcome To The Neighbourhood are trademarks of LRR Technologies (Hyderabad) Pvt Ltd. The textual, graphic, audio and audiovisual material in this site is protected by copyright law. You may not copy, distribute, or use this material except as necessary for your personal, non-commercial use. Any trademarks are the properties of their respective owners. More on Hyderabad, India. Jobs in Hyderabad.