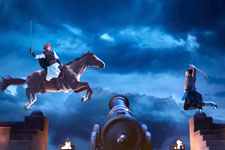 Punarvasu Pendse / fullhyd.com
EDITOR RATING
5.5
Performances
Script
Music/Soundtrack
Visuals
6.0
4.0
5.0
7.0
Suggestions
Can watch again
No
Good for kids
Yes
Good for dates
No
Wait for OTT
Yes
We enjoy watching movies, and we enjoy writing on said movies, and in some rare cases, we get to do both with the same film. Tanhaji: The Unsung Warrior falls into a fourth category of films - which give us extra work on both fronts, and which are movies that could have been so much more.

There's a recent trend in Bollywood of using historical figures to portray points of views on current values and politics, Panipat being a recent example, and Tanhaji is the latest instance. Director Om Raut's usage of blatant black and white symbolism falls squarely in the category of these films.

Subhedar Tanhaji Malusare (Ajay Devgn), the right hand man of Chhatrapati Shivaji Maharaj (Sharad Kelkar), is all set to celebrate his son's wedding when he learns about the mohim (task) of recapturing the hill fort of Kondhana. As part of the treaty of Purandar, Shivaji had been forced to concede 23 forts to Aurangzeb (Luke Kenny), and the sight of the Mughal flag on the forts surrounding Raigad was a constant thorn in his side. Tanhaji's demands of leading the expedition are agreed to, and the general sets out to confront Udaybhan Rathod (Saif Ali Khan), Aurangzeb's trusted lieutenant.

Unlike the aforementioned Panipat, Tanhaji: The Unsung Warrior does not try to offer a historical perspective or a broader background of its characters. Being interested in history, and being from Pune, this reviewer found historical inaccuracies that messed with the overall experience. To their credit, though, the makers did make a decision to tone down a scene which historians have debated on, replacing the mythical "ghorpad" (monitor lizard) used to scale a cliff with the Ghorpade (a surname) brothers.

The movie makes an extreme effort to portray Tanhaji Malusare as a hero and Udaybhan as a villain. Udaybhan, especially, is dressed in colours and a fashion that is decidedly Mughal despite him being a Hindu, which leaves the audience with no illusions about the point that is being put across. He embodies the typical characteristics Indian films reserve for the Mughals - aggression, bloodthirst, and a sadistic mentality. There is no subtlety here - the protagonist is a paragon of virtue, and the opponent is a pantomime villain.

Despite the linear approach and in-your-face aesthetic, Tanhaji is a fun experience, the kind of film where you go in, relax, and get out. And the director goes all out in the action sequences. Tanhaji has some bizarre yet innovative moments of explosive action - the use of ropes and abseiling is easily the coolest thing we've seen in a while in Hindi cinema. These parts of the movie brought hoots of excitement from the audience, laws of physics be damned.

Ajay Devgn can do no wrong, or so states Tanhaji: The Unsung Warrior. Sadly, all this means is that Devgn plays a one-dimensional character. He does get some cool moments during the action scenes, though, so there's that at least. Saif Ali Khan has a blast playing the unstable Udaybhan - his out-and-out villain act is entirely too much fun. Making people fall off over the edges of ramparts just by shouting at them, dancing like a maniac, and fighting in a very peculiar yet stylish way - he gets to do it all.

Kajol hardly has a presence, but her real life relationship with Devgn helps her chemistry with him. Sharad Kelkar looks and acts the part of Shivaji, and is imposing while at it - good stuff. Luke Kenny does what he can with the little that the script offers him, but his role is minor at best.

Tanhaji is a visually appealing movie, which will certainly help it get cinegoers into the theatres. Cinematographer Keiko Nakahara has put together some fantastic battle scenes featuring well-choreographed action sequences that are further enhanced with the use of 3D technology. 3D in the movie is used sparingly and effectively, and you aren't bombarded with flying objects, which further helps in creating an immersive experience.

The music by Ajay-Atul and Sachet-Parampara is the exact kind you would expect in large period pieces. Ajay-Atul, especially, have become the go-to people when a movie needs bombastic song and dance sequences, particularly if it has any connection to Maharashtra or Marathi folklore. The songs are all loud and proud, save for one at the end featuring Kajol that also seems out of place.

En fin, the villain appears to be the stand-out performer in a lot of these legendary tales Bollywood tells, be it Ranveer Singh's Khilji in Padmaavat, or Sanjay Dutt's Abdali in Panipat. Saif Ali Khan is the show stealer here as well, which is an interesting contrast to what the film is trying to portray. It is not for the hero that you should watch Tanhaji: The Unsung Warrior, it is for the Satanic villain!
Share. Save. Connect.
Tweet
TANHAJI: THE UNSUNG WARRIOR SNAPSHOT 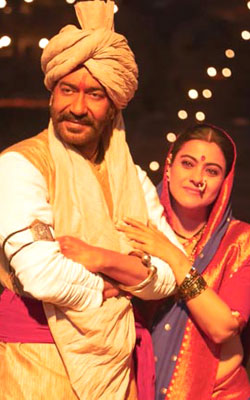 ADVERTISEMENT
This page was tagged for
film review of tanhaji
Tanhaji: The Unsung Warrior hindi movie
Tanhaji: The Unsung Warrior reviews
release date
Ajay Devgn, Saif Ali Khan
Follow @fullhyderabad
Follow fullhyd.com on
About Hyderabad
The Hyderabad Community
Improve fullhyd.com
More
Our Other Local Guides
Our other sites
© Copyright 1999-2009 LRR Technologies (Hyderabad), Pvt Ltd. All rights reserved. fullhyd, fullhyderabad, Welcome To The Neighbourhood are trademarks of LRR Technologies (Hyderabad) Pvt Ltd. The textual, graphic, audio and audiovisual material in this site is protected by copyright law. You may not copy, distribute, or use this material except as necessary for your personal, non-commercial use. Any trademarks are the properties of their respective owners. More on Hyderabad, India. Jobs in Hyderabad.