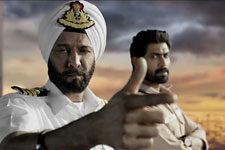 Josh / fullhyd.com
EDITOR RATING
7.5
Performances
Script
Music/Soundtrack
Visuals
8.0
8.0
6.0
7.0
Suggestions
Can watch again
Yes
Good for kids
Yes
Good for dates
No
Wait to rent it
No
Why is a naval officer in 1971 sporting unkempt hair? Or a fuzzy beard which wasn't considered stylish until it was well into 2016? Why are the Pakistani officers wearing the same flaps on their shoulders as do the Indian officers - you know, like they hired the same costume designer or something? How is anyone supposed to buy Tapsee as a Bangladeshi woman in the 70s when her hair colour, eyebrows and face structure all scream 'modern Delhi girl'? And why is there no aquatic life hundreds of metres deep in the Bay Of Bengal?

These are thoughts that enter your mind when you're watching The Ghazi Attack. That is usually bad news. However, the good news is that we left the hall with one single happy thought - the film works.

A little bit of history here. Sometime in 1971, Pakistan realised the foolishness of having a country composed of two completely disjoint and separate provinces viz. East Pakistan (now Bangladesh) and West Pakistan (now Pakistan). The Bengali Pakistanis were rebelling, and to quell the rebellion, the Pakistani military needed supplies. Now if you'll forget the terrible costs of sending supplies across 1,600 km, you'll still have to acknowledge the one big block in between - India. The supplies can't go by land. They can't go by air (too many people and too little airforce). So, yes, they go by sea.

Except, again, there's one big block on the way - INS Vikrant. India's aircraft carrier single-handedly sealed off the Bay Of Bengal thereby perfecting the wedge placement between Pakistan's two provinces. In these desperate times, Pakistan sent PNS Ghazi, their flagship submarine, to take on INS Vikrant and destroy it. And maybe bomb Vishakhapatnam on the way. Only, PNS Ghazi exploded and sunk into retirement on 4th December, 1971.

Much of this is true. PNS Ghazi did indeed sink in the Bay Of Bengal, but the details are classified material to this day. There is no certainty as to whether Indian submarine S21 did it at all (Pakistan claims the submarine got sabotaged on its own with no help from India). This is where The Ghazi Attack takes liberties and furnishes itself with a story that is almost entirely fictional - none of the characters or the incidents in the submarines has any authenticity to them.

Authenticity, though, isn't something that the film takes seriously. The makers don't seem interested in questions like the ones we began this review with. But, bless their souls, they were interested in the things that actually make a film sink or rise.

They cast Kay Kay Menon as Captain Rannvijay Singh, a rather aggressive officer who's itching to run a torpedo into the Pakistani submarine. He is countered by Lieutenant Arjun (Rana Daggubati), who reminds Singh that this is solely a surveillance operation. And Executive Officer Devraj (Atul Kulkarni) mediates between these conflicting perspectives. The casting is excellent. Menon and Kulkarni get the laurels but Rana holds his own amidst these giants.

But it isn't just the biggies - the supporting cast get it right, too. The Pakistani general, the guy who operates the SONAR apparatus, the guy who complains about the change in charge of the sub... everyone makes an impact.

And that could be a direction thing. Sankalp Reddy, the debutante director, knows he's making a lean film with a small budget. He knows he can't be running after verisimilitude in terms of visual details. So he does the best thing possible - he shoots interesting details, lets his actors work on their performances, loses all flab of comedy and songs (no song in the film! woohoo!), and keeps a close grip on the pace. The score (K - yes, that's the composer's credit title), the visuals, the edits, they all work like a charm.

Reddy is supported by Gangaraju Gunnam (a kickass Telugu producer responsible for spectacular films like Aithe) in the screenplay, and the latter's experience with small films comes in handy. Together, they ask questions that can draw and retain interest. How do you activate a mine from a distance? How are orders given in a submarine? What happens when you go 300 m deep? What does a refugee do when she meets army personnel? These are the kind of questions the makers asked themselves and tried answering. Bless their souls and guts.
Share. Save. Connect.
Tweet
THE GHAZI ATTACK SNAPSHOT 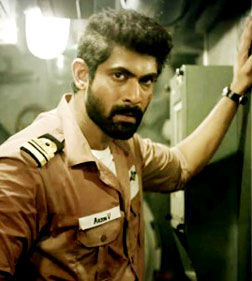 ADVERTISEMENT
This page was tagged for
The Ghazi Attack hindi movie
The Ghazi Attack reviews
release date
Rana Daggubati, Kay Kay Menon
theatres list
Follow @fullhyderabad
Follow fullhyd.com on
About Hyderabad
The Hyderabad Community
Improve fullhyd.com
More
Our Other Local Guides
Our other sites
© Copyright 1999-2009 LRR Technologies (Hyderabad), Pvt Ltd. All rights reserved. fullhyd, fullhyderabad, Welcome To The Neighbourhood are trademarks of LRR Technologies (Hyderabad) Pvt Ltd. The textual, graphic, audio and audiovisual material in this site is protected by copyright law. You may not copy, distribute, or use this material except as necessary for your personal, non-commercial use. Any trademarks are the properties of their respective owners. More on Hyderabad, India. Jobs in Hyderabad.