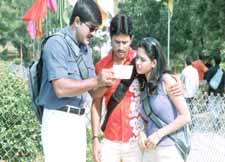 Mithun Verma / fullhyd.com
EDITOR RATING
5.0
Performances
Script
Music/Soundtrack
Visuals
NA
NA
NA
NA
Suggestions
Can watch again
NA
Good for kids
NA
Good for dates
NA
Wait for OTT
NA
O Chinadaana depicts how comedy flicks are made these days: take a sentence since you need a story, fill it up with stupidity, tip it out and put the cork in quick before any sense can get back in. This film falls precisely into that category, where everything is as morbid as the designation of this title to a Jane Austin novel. If you liked Jodi No. 1, it doesn't matter. This is a mutilation of a mutant form of not only that, but of a whole lot of other slapstick stories.

Sreenu (Raja) and Ramya (Gazala) need to get through Divya (Shruti Raj) for their wedding. Divya is Ramya's elder sister, and has lost faith in love due to a stupefying flashback. When she was in her 5th standard, a Rajesh sucked up to her by gifting her lunch boxes and playing the Hrithik in that Coke ad where he makes the bottle jump up with his weight. But one fine day he (Rajesh, not Hrithik - though a 5th standard Hrithik would've still been better) disappears leaving Divya dry and high.

This flashback does come as a surprise when you're expecting gory glycerin sequences. But papa Roshan is surely going to sue the producer for indicating that Hrithik is stale because the flashback is dated to be 14 years old.

Now Sreenu figures that if he can find a suitable bloke who can make Divya flip for himself, then the whole puzzle is solved. So enters Narsimha (Srikanth) with all his charm and with a jaw line so well defined that an elephant would be proud of it. He manages to woo her, but now he has to do that with her dad too.

The next half shows the two guys pretending and pleasing their future father-in-law, and in the process causing innumerable droll situations. Then comes a character that makes us believe him to be the long last Rajesh. The already bizarre state of affairs is further whacked up. But finally the circus comes to an end and they all get married, and to the intended people itself.

All the comedians of the industry are present to make the comedy in the film choke you up, but it doesn't happen with laughter. Bramhanandam, though, will let you have a few guffaws in between all the zzzzzzzz's.

The flick is as funny as a bowl of Jell-O, and its influence shows on the cast: Ghazala has nice, bouncy hair and is otherwise as stoical as the bowl, and Raja is as dead as its translucent mass. Srikanth is a decent actor who doesn't need such roles.

ADVERTISEMENT
This page was tagged for
? ??????? ?????? ??????
o chenadanaa
O Chinadana telugu movie
O Chinadana reviews
release date
Follow @fullhyderabad
Follow fullhyd.com on
About Hyderabad
The Hyderabad Community
Improve fullhyd.com
More
Our Other Local Guides
Our other sites
© Copyright 1999-2009 LRR Technologies (Hyderabad), Pvt Ltd. All rights reserved. fullhyd, fullhyderabad, Welcome To The Neighbourhood are trademarks of LRR Technologies (Hyderabad) Pvt Ltd. The textual, graphic, audio and audiovisual material in this site is protected by copyright law. You may not copy, distribute, or use this material except as necessary for your personal, non-commercial use. Any trademarks are the properties of their respective owners. More on Hyderabad, India. Jobs in Hyderabad.