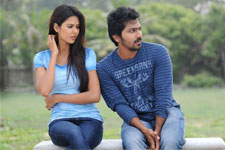 Ravi Kandala / fullhyd.com
EDITOR RATING
4.0
Performances
Script
Music/Soundtrack
Visuals
4.0
3.0
3.0
4.0
Suggestions
Can watch again
No
Good for kids
No
Good for dates
No
Wait for OTT
Yes
Maruthi has a certain image in Tollywood. Without using the direct word for it, let's just say that he's known to make movies where the only thing boys do is drool and stare at girls, and the only thing girls do is fantasise about boys while getting them bankrupt. And Maruthi sure wants to live up to that image - which is why, even a film he brings to Tollywood dubbed from Tamil still has to have the same elements.

Pandavullo Okkadu does not really stoop to Maruthi's normal levels, but it does have lots of elements which he would like. The film is about five childhood buddies. The quintet, as 10-year-olds, idolise a "cool" guy in their village who smokes, drinks and constantly hangs out with friends he's popular with. One fine day, this guy grows a beard and says that he's had a friendship failure. His friends have all gotten married and do not hang out with him any longer.

This prompts the kids to take an oath that they'll never marry, and will stay friends forever. However, one amongst the group - Vasu (Vaibhav) - does not believe in this whole silly promise once he grows up and chases girls actively, but is constantly thwarted by the others. Vasu then decides that he'll go to Chennai to look for a girlfriend, and dissembles that he's going there for a job.

Once he lands there, he manages to hitch a rich girl Pooja (Sonam Bajwa), and all seems to be going well for him. Until his friends land up looking for him, that is.

Pandavullo Okkadu starts off promisingly - the kids and their silly antics keep you engaged for 10-15 minutes. Right after that, though, it starts feeling like the editing went haywire. Every little gag in the movie goes on for more than 15 minutes, making it less and less funny with each minute. The film has hardly about ten to twelve sequences, but each of them is stretched so much that the movie still lasts around 140 minutes. The director shows some spark in the comedy department, but either he or the editor should've been a lot stricter.

The cast does well. Vaibhav and his four friends fit their parts and goof around quite a bit. The comedy requires them to be over the top most of the times, and they pass muster. The heroine is yet another fair girl who shows little in terms of performance and loads in terms of skin. The supporting cast is good, too - VTV Ganesh who plays Nelson deserves particular mention.

The film is shot well, and has decent production values (though the dubbing is bad). The music, though, is unremarkable - there are just two full and one bit song, and they do not cause any ripples.

Pandavullo Okkadu is a one-time watch provided you have a thing for crass comedy. Else, save your money for next week's big one.
Share. Save. Connect.
Tweet
PANDAVULLO OKADU SNAPSHOT 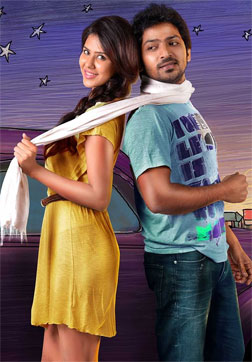 ADVERTISEMENT
This page was tagged for
Pandavullo Okadu telugu movie
Pandavullo Okadu reviews
release date
Vaibhav Reddy, Sonam Bajwa
theatres list
Follow @fullhyderabad
Follow fullhyd.com on
About Hyderabad
The Hyderabad Community
Improve fullhyd.com
More
Our Other Local Guides
Our other sites
© Copyright 1999-2009 LRR Technologies (Hyderabad), Pvt Ltd. All rights reserved. fullhyd, fullhyderabad, Welcome To The Neighbourhood are trademarks of LRR Technologies (Hyderabad) Pvt Ltd. The textual, graphic, audio and audiovisual material in this site is protected by copyright law. You may not copy, distribute, or use this material except as necessary for your personal, non-commercial use. Any trademarks are the properties of their respective owners. More on Hyderabad, India. Jobs in Hyderabad.