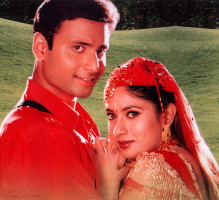 EDITOR RATING
5.0
Performances
Script
Music/Soundtrack
Visuals
NA
NA
NA
NA
Suggestions
Can watch again
NA
Good for kids
NA
Good for dates
NA
Wait to rent it
NA
If you can't make head or tail of a film in the first 30 minutes, then you can take it for granted that it is jinxed. Pelli Sambhandam goes one step ahead and meanders aimlessly for two and a half hours. Director Raghavendra Rao either thought that a screenplay was unnecessary, or decided that the assortment of meaningless scenes that he had in his hand were worth more than a superhit screenplay.

Coming to the plot, Nageswara Rao is the winner of Krishipandit award and the Sahitya Academy award, and we are told that he is the most popular love-story writer. While he takes care of the landed property in the village, his brother, Kota Srinivasa Rao, lives in Mumbai with his son-in-law, Raghuvaran, and his children.

Raghuvaran's daughter, whose marriage is fixed, writes a letter to Nageswara Rao to come and help her avoid the marriage, because she is in love with Raja Ravindra. Nageswara Rao, instead of talking to his brother or his son-in-law, uses all his cheap tricks to get her married to her lover secretly, just a day before the marriage. You should watch the film to believe how cheap this whole thing is. Once the truth is out, Raghuvaran and Kota go wild with temper, and so there is a divide with the brother.

Meanwhile, Nageswara Rao's grandson, Sumant, falls in love with Raghuvaran's second daughter. With the rift in the family, his hopes are dashed to the ground. Nageswara Rao loves his grandson dearly and comes up with another cheap idea that would bring the entire household of Kota Srinivasa Rao to the village. And that is, he assumes total ownership of the landed property. They come, of course, and from here the film rambles on to the conclusion.

The role makes Nageswara Rao look like a clown rather than like a learned person. He wouldn't have enacted such a moronic role in his entire career. There is no harm in his thinking that he is young at heart, but it is high time that he stopped showing it in every movie of his. It definitely doesn't go well with certain characters. Especially the one in this film. The Dada Saheb Phalke award winner should choose his roles more judiciously.

And then there is Sumant. The movie was made, purportedly, to boost his career. Ironically, it does not benefit it an inch. Sakshi Sivanand is her usual self. And so are the others. The comedy is cheap and pointless. Actually the entire film is.
Share. Save. Connect.
Tweet
PELLI SAMBANDHAM SNAPSHOT

ADVERTISEMENT
This page was tagged for
Telugumovirulz
?????? ?????? ??????
pelli sambandham
Telugu full movie pelli sambandham
Pelli sambandham full movie download
Follow @fullhyderabad
Follow fullhyd.com on
About Hyderabad
The Hyderabad Community
Improve fullhyd.com
More
Our Other Local Guides
Our other sites
© Copyright 1999-2009 LRR Technologies (Hyderabad), Pvt Ltd. All rights reserved. fullhyd, fullhyderabad, Welcome To The Neighbourhood are trademarks of LRR Technologies (Hyderabad) Pvt Ltd. The textual, graphic, audio and audiovisual material in this site is protected by copyright law. You may not copy, distribute, or use this material except as necessary for your personal, non-commercial use. Any trademarks are the properties of their respective owners. More on Hyderabad, India. Jobs in Hyderabad.