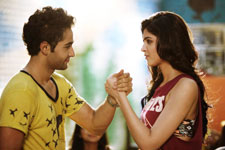 These factors alone will guarantee curious moviegoers, but add to that the third dimension - A R Rahman's music - and you have a film that is not an unusual romantic comedy, but well worth one watch, at least.

The story begins with Dinesh Nigam aka Dino (Armaan Jain), who sneaks into his best friend's house during a wedding event and sneaks her away to party. Her name is Karishma Shetty (Deeksha Seth), but everybody calls her K. Dino and K are in their final years of college, and are tired of being the disappointment that their respective parents think they are.

K's Shetty clan is very keen to get her married off to another Shetty. Given their social status, K's family receives many offers. She is, however, not thrilled about this, and Dino notices her slow slink into depression. And then they come up with a plan - to elope with each other, since they are anyway soulmates, in a way.

It seems like a good plan, and they think life is going to be all fun and games in Goa, which is where they head first. Unfortunately, their parents are not going to let go of them that easily. A chase ensues, which sees the couple zip across the country in an effort to shake off their families. They even marry on the run, although they never manage to consummate the marriage.

As time and money run out, life seems less fun, and ugly spats become a common occurrence between the two. Also, they learn that they cannot always trust the people they think are cool, and therefore they become more mature about life in general, and love in particular.

With the increasing fights, Dino and K finally decide to return home to their families, and apply for a divorce. Both are still hell bent on massaging their own egos, and by the time they realise how strong their bond really is, it may just be too late.

Written by Arif Ali, also the director, the story touches on a few basic issues: (i) the immaturity apparent in today's young students, (ii) the ignorance and arrogance of the same youth, (iii) the importance of knowing more about their own country instead of shopping in London or New York, (iv) the need to be sensitive to those who love them, and (v) the understanding that life is not all fun and games.

This may sound like too many basics to cover in one movie, but the length allows it. The only problem then is the lack of clarity and structure in the writing.

The influence that Imtiaz Ali has on his younger sibling is apparent. Lekar Hum Deewana Dil is a road trip film (think Jab We Met) about two friends who are destined to be lovers (think Socha Na Tha) and the angst that drives them to realise their own potential (think Rockstar). But if you watch closely, you may notice that there are many jumps between sequences - Arif Ali may want us to connect the dots ourselves, but sometimes we may want to know all the details. For example - where did the youngsters get their money from? And how did she contact her family?

The first half of the movie has the required energy that one would expect from a youth film, but post intermission, the narrative becomes repetitive. The humour thereon seems rather forced, although, to give the director his due, he does manage to insert some pretty funny dialogues and sequences - especially the track that involves K's father's assistant (Akhil Iyer). The characters are supposed to be irresponsible, and that is the point of the story, but it makes you wonder why their families are so indulgent with their doings. Granted that the idea is Dino and K have otherwise modern parents, but even then, you may become slightly irritated with the way all of them behave.

Given the vast number of issues that the movie has to cover from point A to point Z, it is understood that superficiality in some characters is a given. The tracks with the brother and the counsellor are irrelevant. They may as well have been done away with. Instead, a more microscopic look at why both Dino and K have issues with their parents would have made the story more interesting. The peripheral characters become rather flat, in the bargain.

The end, when it does arrive, is predictable from the point of view of story development, but the director has an interesting take on happy endings. The entire film, in fact, has its fair share of clichés, but the difference is that they are not always where you expect them to be. The film rushes into the resolution, and then ends rather abruptly, but you must sit through the end credits - the concept is quite original.

The biggest problem with what could have been a fun-filled movie is the lead actor. Armaan Jain is confident, and has screen presence, but his acting skills cannot be compared to those of his more famous cousins. He has the cheesiest dialogues, and his efforts to be the bad boy with a heart of gold is marred by his eyes - his smile just does not reach them.

Deeksha Seth, on the other hand, is more comfortable with her role. She is not only confident, having acted in a few movies in the South, she also has perfect timing. In a way she is a younger version of Anushka Sharma, and you'd want to see more of her later.

Kumud Mishra and Anita Kulkarni as Dino's parents are perfect in their portrayal, as are Rahul Shetty and Rinku Karmakar as K's parents. Rohini Hattangadi, rarely seen on screen these days, is effective as the judge, as are Darius Shroff and Jayant Wadkar as lawyers. The additional casting is believable. Varun Badola, Gautami Kapoor and Sudeep Sahir remain caricatures, in a way, and are sadly underused.

Although the movie is largely set in Mumbai, the makers do not show too much of the city. Instead, they concentrate on the more personal spaces of the characters - the houses they live in, the rooms they occupy, the offices they visit, and the college they study in. Even Goa is not the Goa you know, although that part of the film gets over too quickly. A montage of shots showing their travels and foray into the jungle seems visually authentic, and the cinematographer does a decent job of presenting the director's vision. The costumes, on the other hand, do not make a statement, and are pretty insipid.

The music by A R Rahman is not his best work, but the soundtrack grows on you. The songs are reminiscent of some of the maestro's previous works, and Khalifa is already a hit. The song sequences are shot like music videos, and there are too many of them in the first half. The editing is effective, but the second half of the movie does drag a bit - the length is about 150 minutes or so.

Lekar Hum Deewana Dil cannot really be termed an aspirational movie. It is Arif Ali's first, and he shows promise. All that candy floss and gloss may make it seem slightly unrealistic, but the movie has heart. It just needed better execution.
Share. Save. Connect.
Tweet
LEKAR HUM DEEWANA DIL SNAPSHOT 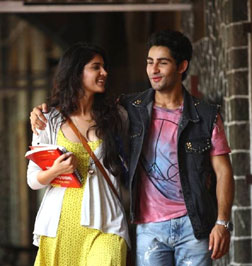 ADVERTISEMENT
This page was tagged for
Lekar Hum Deewana Dil hindi movie
Lekar Hum Deewana Dil reviews
release date
Armaan Jain, Deeksha Seth
theatres list
Follow @fullhyderabad
Follow fullhyd.com on
About Hyderabad
The Hyderabad Community
Improve fullhyd.com
More
Our Other Local Guides
Our other sites
© Copyright 1999-2009 LRR Technologies (Hyderabad), Pvt Ltd. All rights reserved. fullhyd, fullhyderabad, Welcome To The Neighbourhood are trademarks of LRR Technologies (Hyderabad) Pvt Ltd. The textual, graphic, audio and audiovisual material in this site is protected by copyright law. You may not copy, distribute, or use this material except as necessary for your personal, non-commercial use. Any trademarks are the properties of their respective owners. More on Hyderabad, India. Jobs in Hyderabad.