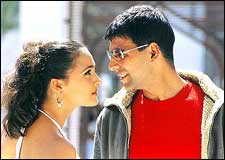 Take this movie for instance. A story about hardcore Mumbai cops. Now there's a new concept! As thinking will spoil the fun, let's get down to business - the story in question.

Paresh Rawal is the wise-quacking cop whose sense of timing makes him a hit within the department, and in the theater. His close chums include the Shotgun Sinha, who's a legendary cop losing his momentum like a spinning top, and Suniel, a hotheaded encounter specialist.

Together, these cops try cleaning up the overwhelmingly suave underworld, which runs through various strata of the society. The ground level operations are run by the brilliant Irfan Khan and his psychotic brother, Rahul Dev. Rahul has to be psychotic to pass that off as acting.

The funding for this gang comes from the business magnet Jackie Shroff, and the power, from the Home Minister himself. When Akshay Kumar is transferred to the crime branch of Mumbai, he has to deal with all of these.

But surprisingly, the hardest to deal among all of them is Suniel. Suneil's idea of cleaning up the system is straightforward and simple - a bullet will end all misery. Incidentally, that's how we felt about Suniel's acting abilities in some of the movies. But not here. Surprisingly, he's delivered a polished performance in the most demanding character of the flick. In a few scenes, he looks surprised himself.

He surely surprises Akshay Kumar. So much so that Akhsay, who was dead against becoming a criminal to catch one, changes his mind. As Akshay later realizes: 'Mein is kurukshetra mein Ram banne jaa raha tha jab asal mein yahan Krishn ki zaroorat hai.'

Akshay was trapped in the wake of following his principles and in the reality of sticking to his ethics. He gets rid of the confusion by singing a raunchy duet with Lara. (Lara Dutta not Lara Brian, though that would've been more entertaining).

Akshay's decision to be a Roman when in Rome is spurred on by the death of Paresh Rawal, as Paresh gets unnecessarily shot in a bust. This is when Suniel delivers the knockout punch speech that convinces Akshay to proactively tote a gun, and more importantly, to use it, too.

Somewhere in the hunt, even Suniel is lost. But Akshay and Shatrugan finish the hunt, skin the gangsters, and gorge on their flesh.

The performances in the movie are exceptional. Madhur Bhandarkar has done a brilliant job at casting. Even his choice of character artists is accurate with every one of them contributing something for the movie. His choice of item number girls is also particularly appreciated… by the girls who've done those item numbers.

The movie comes out an entertainer because of the genius of the stunt coordinator, the sound recordist, the cinematographer and the editor. The style of narration is chic with a blatantly swanky use of modern techniques for all these elements. Split screen shots, frame fading into black and white, packet narration alternating between the songs and the story and a bit of shootout gore, are all done in good taste.

The stunts are especially exciting though they tried ripping parts off from Face-Off. The only areas where Madhur went wrong were including Lara Dutta and Raveena Tandon. But can't really blame a man for including pretty women in his baby, can we?

In all, this one's too good to be just a commercial movie. Even though occasionally it reminds you that it is.
Share. Save. Connect.
Tweet
AAN SNAPSHOT

ADVERTISEMENT
This page was tagged for
Aan hindi movie
Aan reviews
release date
Shatrugan Sinha, Akshay Kumar
theatres list
Follow @fullhyderabad
Follow fullhyd.com on
About Hyderabad
The Hyderabad Community
Improve fullhyd.com
More
Our Other Local Guides
Our other sites
© Copyright 1999-2009 LRR Technologies (Hyderabad), Pvt Ltd. All rights reserved. fullhyd, fullhyderabad, Welcome To The Neighbourhood are trademarks of LRR Technologies (Hyderabad) Pvt Ltd. The textual, graphic, audio and audiovisual material in this site is protected by copyright law. You may not copy, distribute, or use this material except as necessary for your personal, non-commercial use. Any trademarks are the properties of their respective owners. More on Hyderabad, India. Jobs in Hyderabad.