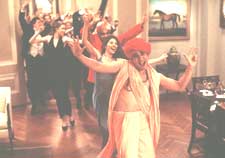 Bollywood calls again, and this time around it's a goofy romcom schtick that manages to poke a great deal of fun at both the Indian and American cultures, and manages to get away with it.

Ramu Gupta (Jimi Mistry) mostly likes to Macarena. Tired of wiggling his stuff in a one-room dance academy full of Punju-aunties with red lipstick smeared on their tired faces, he decides to seek his dream of making it big in Hollywood by actually setting out to America. He lands in the Land Of The Free and finds his first gig as a waiter. Fixing a customer's attitude, he soon finds himself lighter by one Chicken Tikka Masala and his job. 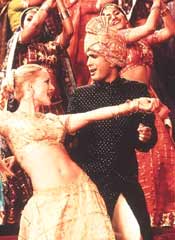 This is where the Akashik radio and the past karmic results kick into action, as by some quirk of fate, Ramu becomes a sex mystic with the key to the kundalinis of a bunch of totally haphazard, random Manhattanites. You know, the sorts who aim their solar panels at the moon. He begins to rule the rosters of the New York hip dinner-party set with some plagiarized porn star self-help lines that Sharonna has been doling out to him. Helping him on with his quest of making it big in America is the new age junkie and brat pack head Lexei (Marisa Tomei), who can't pee her way out of a shoe even if it had instructions on the heel.

Then the inevitable happens - the romcom decides to focus on the 'rom', and the 'com' becomes goofier with some Bollyowood ishtyle numbers juxtaposed with Travolta's Grease. 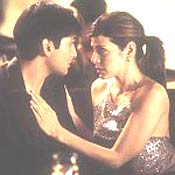 Heather Graham as the tart with the heart is good - but then through all that wriggling, I really wonder if anybody was paying any attention. It's a little hard to see Marisa Tomei being squandered in a wasted role of the junkie, and you feel a bit shortchanged for her.

ADVERTISEMENT
This page was tagged for
guru movie in hindi
The Guru (Hindi) hindi movie
The Guru (Hindi) reviews
release date
Jimi Mistry, Heather Graham
Follow @fullhyderabad
Follow fullhyd.com on
About Hyderabad
The Hyderabad Community
Improve fullhyd.com
More
Our Other Local Guides
Our other sites
© Copyright 1999-2009 LRR Technologies (Hyderabad), Pvt Ltd. All rights reserved. fullhyd, fullhyderabad, Welcome To The Neighbourhood are trademarks of LRR Technologies (Hyderabad) Pvt Ltd. The textual, graphic, audio and audiovisual material in this site is protected by copyright law. You may not copy, distribute, or use this material except as necessary for your personal, non-commercial use. Any trademarks are the properties of their respective owners. More on Hyderabad, India. Jobs in Hyderabad.