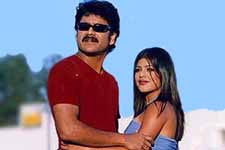 EDITOR RATING
6.0
Performances
Script
Music/Soundtrack
Visuals
NA
NA
NA
NA
Suggestions
Can watch again
NA
Good for kids
NA
Good for dates
NA
Wait to rent it
NA
For an actor who has given a slew of musical love stories in recent times, this portrayal of a village headman by Nagarjuna comes as a pleasant surprise. Eduruleni Manishi has him plunge into rural dramas a la Mohan Babu in Pedarayudu and Venkatesh in Suryavamsam, and into a genre of roles that demand intense portrayal of emotions. And yes, this is definitely a step in the right direction, for Nagarjuna has earlier ventured into such untested waters and proven that he can excel in these kind of roles, too. But sadly, the film is devoid of the "intensity" that is normally associated with village dramas.

It starts off on a good note. Suryamurthy (Nagarjuna sporting gold-colored khadi shirts and dhotis) is the noble head of the village who commands respect from the people for his good-hearted ways. And his acts of guiding his village folk are legendary. His urban-bred brother Satyamurthy (Nagarjuna again) is the alter ego of Suryamurthy, and they share a rare bonding.

Satyamurthy falls in love with Srilekha (Shehnaz), but he doesn't want to marry until he gets his none-too-interested-in-marriage elder brother to agree to tie the knot. And so, he convinces Vasundhara (Soundarya) to attempt to get him (Suryamurthy) to fall in love with her. Vasundhara comes to the village, and after a series of incidents that bring Suryamurthy and her together, they get married.

But Vasundhara has other plans. And this includes tarnishing the image of Suryamurthy's family, as she believes that the latter has wronged her sister. She successfully drives a wedge between the two brothers. And then Satyamurthy gets entangled in the local politics.

Nagarjuna looks good as Suryamurthy, and his gait and get up have been worked out well. There is grace in his acting and he fits the role perfectly. However, the basic drawback of the film is that it lacks a credible villain. Of course, there is Nasar spewing venom on the brothers at every given opportunity, but with the movie getting bogged down in family problems, this aspect of the story fails to make any impact. With the result that once realization dawns on Soundarya, the director doesn't know which way to take the movie.

His confusion becomes acute as the film comes to a close and we are hurriedly treated to a quick series of violent incidents that give scope for Suryamurthy to display his muscle power. There is so much gaucherie in the handling of this part that it is hardly convincing.

There is Shehnaz who plays the role of the urban-bred English-speaking girlfriend of the junior Nagarjuna, obviously to fill the fun and glamour slot. But she doesn't ooze the kind of oomph that is expected by the audiences.

This would have been a good movie if debutant director Jonnalagadda Srinivasa Rao had known how to handle a serious and sensitive subject. However, the comedy track essayed by Brahmanandam, Ali and L B Sriram manages to evoke laughter.
Share. Save. Connect.
Tweet
EDURULENI MANISHI SNAPSHOT

ADVERTISEMENT
This page was tagged for
manshi leni
eduru leni manshi
Eduruleni Manishi telugu movie
Eduruleni Manishi reviews
release date
Follow @fullhyderabad
Follow fullhyd.com on
About Hyderabad
The Hyderabad Community
Improve fullhyd.com
More
Our Other Local Guides
Our other sites
© Copyright 1999-2009 LRR Technologies (Hyderabad), Pvt Ltd. All rights reserved. fullhyd, fullhyderabad, Welcome To The Neighbourhood are trademarks of LRR Technologies (Hyderabad) Pvt Ltd. The textual, graphic, audio and audiovisual material in this site is protected by copyright law. You may not copy, distribute, or use this material except as necessary for your personal, non-commercial use. Any trademarks are the properties of their respective owners. More on Hyderabad, India. Jobs in Hyderabad.