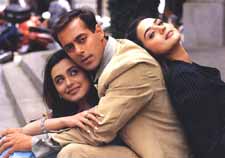 Feroz Hassan / fullhyd.com
EDITOR RATING
7.0
Performances
Script
Music/Soundtrack
Visuals
NA
NA
NA
NA
Suggestions
Can watch again
NA
Good for kids
NA
Good for dates
NA
Wait for OTT
NA
The director duo of Abbas-Mustan is so used to keeping its audience in suspense that it must have been a rude shock when the tables turned and they remained in the dark about the fate of this film. The chori-chupke dealings of the producer and the financier of this film almost saw to it that the duo's only non-suspense, non-action movie to date remained a non-starter. Good for it that this movie sees the light of the day, for it is about time that the duo did something to undo the fiasco that was Baadshah.

From the Abbas-Mustan duo, we move to the Salman-Rani-Preity trio. It is the second movie starring the three. If Har Dil Jo Pyar Karega was childish and garish, then CCCC is mawkish, not nearly as childish, but thankfully subdued. Raj Malhotra (Salman Khan) weds Priya (Rani Mukherjee) to please his oldie grandie who can't wait to become great grandie. Well, Raj himself is quite pleased with the betrothal.

Priya has a miscarriage and the doc says she can't carry again. But the news has to be withheld from filmi grandpas who are always courting a third heart attack. Priya reads about surrogate motherhood, and Raj, being the dutiful husband, obliges by getting 'Pretty Woman' Madhu (Preity Zinta), a prostitute, to do the job. And off the three fly to Switzerland for the cover up.

For a Salman Khan starrer, the movie is surprisingly easy on the eyes and ears, and for a Bollywood movie, the script has an even more surprising attempt at novelty. But the novelty can easily be traced back to some South Indian movie and even that is interspersed with a jarring rip-off from Pretty Woman. That's what lets Preity Zinta down as Salman and Rani take away the acting honors.

Actually, Salman remains rather wooden throughout with a distinct lack of energy, especially in the songs where he's just going through the motions. However, that's any day better than his stripped-down and over-the-top avatar. If that's what gunpoint does to him, then he has reason to be thankful to Bhai.

This is an Abbas-Mustan movie that throws up a mild surprise or two, though not at all of the whodunit kind!
Share. Save. Connect.
Tweet
CHORI CHORI CHUPKE CHUPKE SNAPSHOT

ADVERTISEMENT
This page was tagged for
chori chori chupke chupke movie
CHORI CHORI CHUPKE RELASING DATE IN MOVIE THATER
Chori Chori Chupke Chupke hindi movie
Chori Chori Chupke Chupke reviews
release date
Follow @fullhyderabad
Follow fullhyd.com on
About Hyderabad
The Hyderabad Community
Improve fullhyd.com
More
Our Other Local Guides
Our other sites
© Copyright 1999-2009 LRR Technologies (Hyderabad), Pvt Ltd. All rights reserved. fullhyd, fullhyderabad, Welcome To The Neighbourhood are trademarks of LRR Technologies (Hyderabad) Pvt Ltd. The textual, graphic, audio and audiovisual material in this site is protected by copyright law. You may not copy, distribute, or use this material except as necessary for your personal, non-commercial use. Any trademarks are the properties of their respective owners. More on Hyderabad, India. Jobs in Hyderabad.