The Sponge Bob Movie: Sponge Out Of Water Review 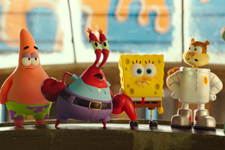 Nupur Barua / fullhyd.com
EDITOR RATING
7.0
Performances
Script
Music/Soundtrack
Visuals
8.0
7.0
6.0
7.0
Suggestions
Can watch again
Yes
Good for kids
Yes
Good for dates
Yes
Wait for OTT
No
Did you know that the animated Nickelodeon character, SpongeBob, sells the most merchandise for the MTV network? Or that it is popular across 170 countries and in 24 languages? SpongeBob, created as a "squeaky clean character" (therefore the reference to the kitchen sponge), is a sea sponge, and he works as a cook in the underwater city of Bikini Bottom. His appearance as the protagonist of a television show assured him much adulation, and he even starred in a 2004 movie.

The SpongeBob Movie: Sponge Out Of Water is the sequel to the first film, and despite the gap between the two releases, the spirit of pure brilliance and wit that has always been present wherever SpongeBob goes, is still intact.

Burger-Beard the Pirate (Antonio Banderas) is on a treasure hunt. He is looking for that precious book, the one that makes everything written in it come true. He finds the book on an island of Bikini Atoll, and he reads the story that is already written there, to his seagull minions. In the story, SpongeBob SquarePants (Tom Kenny) is a loyal cook at Krusty Krab in Bikini Bottom. His boss, Mr Krabs (Clancy Brown), appreciates his loyalty and trusts him with the secret recipe that makes residents of Bikini Bottom frequent the joint. Their sole rival, Plankton (Mr Lawrence), runs an eatery right across from Krusty Krab, but his food is terrible. His sole aim in life is to steal the secret recipe from Mr Krabs' safe.

After a food fight and many distractions, Plankton manages to sneak into the safe that houses the recipe, but SpongeBob catches him red-handed. As they play tug of war with the recipe, it disappears, leaving both Plankton and SpongeBob flummoxed. Mr Krabs decides to turn a mob against Plankton because he thinks Plankton is lying about the disappearance of the recipe. SpongeBob rescues Plankton, because he believes in the latter's innocence, and together, they set out to figure out what happened back there. This will require Plankton to understand what working in a team means, and he has never been placed in such a position before.

Burger-Beard the Pirate tells the seagulls that the story ends here, but the latter do not believe it. They think that the story of SpongeBob deserves a better ending. In the chaos that follows both SpongeBob and Burger-Beard the Pirate, we are subjected to time travel and super-heroes, amongst others, all because Krusty Krab needs to function normally.

As with all SpongeBob stories, in this one, too, there is plenty of humour. Most of it arises from the lead character's innocence and sometimes stupidity. At the end of it all, however, the simpleton turns out to be unwittingly smart, as he resolves issues with simplicity and straightforwardness.

The script dabbles in loyalty and in giving people second chances, and these are life lessons for the young audiences that worship the SpongeBob series. Teamwork is another theme that is cleverly woven in, with the lesson that while it is not always easy, one has to let go of individual egos for the greater good.

The latter half of the movie becomes a little complicated, what with all the various tracks and time travel. Also, there are just too many things happening in the second half, and it may become difficult to keep track. Thankfully, the dialogues are simple, relatively, and concepts are explained more than once, so you know exactly what is going on in the lives of SpongeBob and Burger-Beard the Pirate.

There is plenty of sentimentality, too, and references to past events. The story is otherwise simple, the moral being that the good guys always win, no matter how difficult life gets, as long as one remains true to oneself.

The cast comprises the original voices of the artistes associated with the television series, and that puts you in a familiar environment immediately if you are a SpongeBob fan. The one new addition is Antonio Banderas, and he obviously has fun hamming his way through the movie, spoofing Jack Sparrow, or so it seems. The seagulls are a little difficult to understand at times, because of their varying accents and voices, but they more than make up for it with their cuteness. The lead voices - Tom Kenny and Mr Lawrence - will stay in your head for a while. They bring to life the stupidity and the humour that the characters of Bikini Bottom are known for.

The production design is a mix of live action shooting and animation. While the animated world and a futuristic version of it are familiar and do not require much work, it is the live action setting that pales in comparison. Burger-Beard the Pirate's costume is too reminiscent of Jack Sparrow, as is his character. In terms of special effects, the difference between the animated sequences and the live action sequences is glaringly obvious. The two worlds do not blend in as the story requires them to. The music is apt for the animated world, and a bit too loud for the live world. The editing, however, is almost flawless.

The SpongeBob Movie: Sponge Out Of Water is clearly aimed at the franchise loyalists, especially kids (although adults are certain to enjoy the film as well). We recommend, if you do not know SpongeBob, that you look up some of the old episodes of the television show, just to get a background of the character, before you watch the movie. And watch it you must, for its simplicity.
Share. Save. Connect.
Tweet
THE SPONGE BOB MOVIE:... SNAPSHOT
THE SPONGE BOB MOVIE: SPONGE OUT OF WATER SNAPSHOT 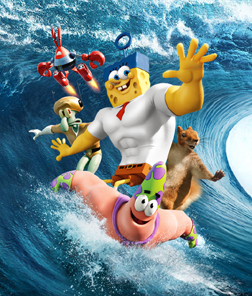 ADVERTISEMENT
This page was tagged for
The Sponge Bob Movie: Sponge Out Of Water english movie
The Sponge Bob Movie: Sponge Out Of Water reviews
release date
Antonio Banderas (Burger Beard), Eric Bauza (Seagull)
theatres list
Follow @fullhyderabad
Follow fullhyd.com on
About Hyderabad
The Hyderabad Community
Improve fullhyd.com
More
Our Other Local Guides
Our other sites
© Copyright 1999-2009 LRR Technologies (Hyderabad), Pvt Ltd. All rights reserved. fullhyd, fullhyderabad, Welcome To The Neighbourhood are trademarks of LRR Technologies (Hyderabad) Pvt Ltd. The textual, graphic, audio and audiovisual material in this site is protected by copyright law. You may not copy, distribute, or use this material except as necessary for your personal, non-commercial use. Any trademarks are the properties of their respective owners. More on Hyderabad, India. Jobs in Hyderabad.