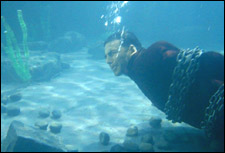 Samrat Sharma / fullhyd.com
EDITOR RATING
4.0
Performances
Script
Music/Soundtrack
Visuals
8.5
3.5
5.0
7.0
Suggestions
Can watch again
No
Good for kids
No
Good for dates
Yes
Wait for OTT
Yes
If you're Akshay Kumar, and you want to break the comedy label with some serious acting and a worthwhile film, betting on Nagesh Kukunoor isn't the worst idea in the world. And if you're Nagesh, trying to prove himself as more than just the guy who makes small fun films, getting the reigning king of Bollyland is a pretty nifty thing, too.

Where does it go wrong, then? Oh, make no mistake; things go very, very wrong. If I had to put my money on one thing, I'd put it on Nagesh's writing. Hyderabad's favorite Hindi language filmmaker has always strived to improve himself as a filmmaker. His craft and skill have grown from strength to strength with every successive film, whatever its relative merit. His writing is another thing altogether.

Nagesh is a master of the small moments, the slice of life filmmaking about real people, real problems. Stuck in an entertainer, the flamboyant plot that he himself constructed and the larger-than-life presence of Akshay Kumar leads the director to write atrocious dialogue, and worse still, a very, very bad narrative. In the coming days you will hear this from a lot of people; the climax is one of the most contrived and worst executed pieces of narrative ever committed to film by Kukunoor.

In a supernatural thriller, this is absolutely the worst mistake you can made. In fact, all through the film, while the super is in abundant view, natural is like a penguin in the Sahara.

Jai Puri (Kumar) is a Canadian of Indian origin, and works as a forest ranger. He stays with his girlfriend (Takia), and is on strained terms with his parents (the ever brilliant Benjamin Gilani and Sharmila Tagore). He also can look into a photograph and travel back in time to that moment to see what transpired.

When his father is killed in an accident, some happenstance leads police officer Habib (Jaffrey) to believe foul play was involved, and Jai begins searching for the murderer by doing what he does best - looking intensely into photographs. Taking his cue from one M. Night, Kukunoor dresses his film with a lot of mood and a genuine feeling of place. The supernatural theme also lends itself to some very inspired shot selection by him, and he manages make us feel every ounce of the gravitas.

The acting work is pretty solid, too. Akshay is adept at taking loose screenplays and doing something special with them. While his spontaneity and earthy charm have no use for a deliberately paced movie such as this, he brings out the big guns, and matches the mood note for note. With Gilani, Tagore, Karnad and Jaffrey rounding off a mini-ensemble, the drama gets the best players it could, and they indeed deliver as best they can. Indeed, if not for the clunky writing, they may have done some very polished work.

The atrocious plotting robs a well-crafted film of its glory, and dialogue writing from the â€˜60s makes the very slick film lose its natural ability to just be. As it stands, the movie is incongruent with itself. It is a somber moody film but the writing lets it down, and it's a thriller with an original premise, but the plotting destroys whatever thrills you may have been able to glean.

I wish I could have more whole-heartedly recommended this film. I like both Akshay and Nagesh, and I wished the meeting of an indie genius (har!) and a charismatic box office star may have been something special. I can't, and it isn't. All we have is this fistful of sand, and a film that could not realize its own potential.
Share. Save. Connect.
Tweet
8X10 TASVEER SNAPSHOT

ADVERTISEMENT
This page was tagged for
8x10 tasveer 3 movie
8x10 Tasveer hindi movie
8x10 Tasveer reviews
release date
Akshay Kumar, Ayesha Takia
Follow @fullhyderabad
Follow fullhyd.com on
About Hyderabad
The Hyderabad Community
Improve fullhyd.com
More
Our Other Local Guides
Our other sites
© Copyright 1999-2009 LRR Technologies (Hyderabad), Pvt Ltd. All rights reserved. fullhyd, fullhyderabad, Welcome To The Neighbourhood are trademarks of LRR Technologies (Hyderabad) Pvt Ltd. The textual, graphic, audio and audiovisual material in this site is protected by copyright law. You may not copy, distribute, or use this material except as necessary for your personal, non-commercial use. Any trademarks are the properties of their respective owners. More on Hyderabad, India. Jobs in Hyderabad.