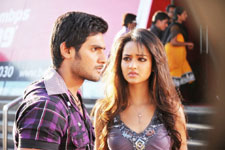 Spandana P / fullhyd.com
EDITOR RATING
2.5
Performances
Script
Music/Soundtrack
Visuals
3.0
2.0
2.0
4.0
Suggestions
Can watch again
No
Good for kids
No
Good for dates
Yes
Wait to rent it
No
The name of this one is an indicator of its content - the bleakness of the word-play extends to the entire movie. Indeed, Pyaar Mein Padipoyane is a regular teen love story that has little new to offer. It's a re-rendition of the many other boy-meets-girl flicks that have been dished out in the past.

The plot revolves around college-goer Chandra (Aadi) and his gang of friends whose passion is music. In the process of composing an album, Chandra comes across Yukta (Shanvi). He is completely smitten by her and follows her all over the place like a true blue lover boy. He even gets her to croon his compositions and makes her the lead female singer for his album.

Though initially reluctant, she starts reciprocating his feelings and they fall in love. The regular duets and sweet nothings follow, which dominate most of the movie, and the ground for a serious plot is never really set. The gang sets about trying to make it big in the music world by getting in touch with the top music banners. There is a small role by Vennela Kishore as the boss of a top music brand, which could have been better crafted.

The movie starts losing its grip very soon into the first half, and the camaraderie between Chandra and his friends is the only element that keeps it barely afloat. There is a twist in the tale preceding the intermission, where Chandra learns of Yukta's hatred for her childhood friend Chinna. This is the theme for the rest of the movie and doesn't make much sense, as it is based on some innocent prank by a kid.

The plot doesn't progress much in the second half, with the only aim of the gang being to track down Chinna. This gives rise to some immature situations and performances by the cast. Except for some respite with Sapthagiri's comedy (he has the only meaty role in a bunch of comedians featuring in the film), the second half just drones on without any defined plot to boast of. Thagubothu Ramesh is cast in his established role of a drunkard, and could have been better utilized to make the rest of the movie tolerable.

Aadi needs to work on his acting skills as he seems to be putting too much effort to make his emotions come across in a few scenes. His comic timing however is bang on, and his dance moves are smooth and a pleasure to watch. Shanvi gives a mediocre performance. The rest of the cast are given very limited screen time, and have little to do.

The music track is just passable, except for the "Nuvve Nuvve" number which is mellifluous. The cinematography is good, with some picturesque outdoor locales in a couple of songs.
To sum up, Pyaar Mein Padipoyane never really comes into its own, leaving you with the impression that you have seen everything in it a million times before. Watch it only if you lack better options to spend your weekend.
Share. Save. Connect.
Tweet
PYAR MEIN PADIPOYANE SNAPSHOT 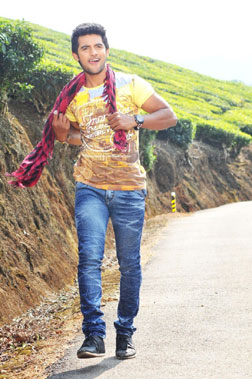 ADVERTISEMENT
This page was tagged for
Pyar Mein Padipoyane telugu movie
Pyar Mein Padipoyane reviews
release date
Aadhi, Shanvi
theatres list
Follow @fullhyderabad
Follow fullhyd.com on
About Hyderabad
The Hyderabad Community
Improve fullhyd.com
More
Our Other Local Guides
Our other sites
© Copyright 1999-2009 LRR Technologies (Hyderabad), Pvt Ltd. All rights reserved. fullhyd, fullhyderabad, Welcome To The Neighbourhood are trademarks of LRR Technologies (Hyderabad) Pvt Ltd. The textual, graphic, audio and audiovisual material in this site is protected by copyright law. You may not copy, distribute, or use this material except as necessary for your personal, non-commercial use. Any trademarks are the properties of their respective owners. More on Hyderabad, India. Jobs in Hyderabad.