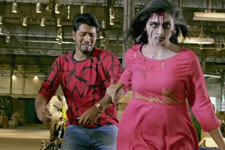 Ajay Kumar R / fullhyd.com
EDITOR RATING
5.5
Performances
Script
Music/Soundtrack
Visuals
7.0
5.0
6.0
6.0
Suggestions
Can watch again
No
Good for kids
No
Good for dates
Yes
Wait to rent it
Yes
G Nageswara Reddy in his new horror comedy Intlo Deyyam Nakem Bhayam offers another peg of the same drink, but with the added flavour of some good comedy. However, the film makes little effort to keep you engrossed. Despite the director adding all the standard ingredients - a haunted mansion, a female ghost with long hair and zero fashion sense, a family and, of course, lots of scapegoats - the film falls flat after about 30 minutes.

In dire need of cash, Naresh - played by Allari Naresh - masquerades as a fake godman and goes to a supposedly haunted mansion at the request of an unwary wealthy businessman (Rajendra Prasad) who has rented it for nearly eight crores to perform his daughter's wedding vows, to ward off the evil spirit that has apparently taken a foothold in the place. Naresh is accompanied by two of his colleagues (Shakalaka Shankar and Jabardasth Chandra) who work with him in a wedding band.

Naresh and gang try their best to pry out the spirit in a stretch of riotous one-liners and incidents. But to their utter horror, the ghoul, coincidentally, turns out to be someone from Naresh's past and was apparently murdered. The rest of the narrative is about the agenda of the spirit, what it wants from Naresh and the rest, and Naresh's link to its thirst for vengeance.

IDNB features most of the big Tollywood comedians, and starts promisingly with plenty of hilarious fun and the occasional jumpscares, but soon loses its way as the script cannot conflate two genres. Perhaps too many big actors and their characters' development and screen times make the freak-manor in the film less funny by the minute. Also, the movie underuses the props (makeup and sets) and leans too much on dialogues after a certain point. It meanders needlessly towards the second half, and makes you want it to just end.

But there still are enough comedy and scary scenes that help this one redeem itself, though some of the humour is crass and unfunny. To your surprise, Allari Naresh isn't the most prominent actor, and adds little to the horror or hilarity. Co-stars Shankar and Chandra steal his thunder. And Rajendra Prasad and a few of his character's family members act well, too. Brahmanandam doesn't have much of a role, which may make you want more given he isn't around too much these days. Mouryani as the spirit is almost scary, but her acting doesn't match up. She does do well in a few parts towards the end of the second half, though.

The production values play an important role in making the movie watchable. The cinematography (Dasaradhi Sivendra) is decent, too - while the horror visuals could have been better, they do scare you at times. Sai Karthik's soundtrack amps up the thrills, but is nothing new.

Perhaps what movies of this genre need now are a different approach - avoiding overuse of the clichéd elements can keep people interested and absorbed. But then what's a horror film without a haunted house and an undead female with dishevelled long hair and an autotuned voice?
Share. Save. Connect.
Tweet
INTLO DEYYAM NAKEM BHAYAM SNAPSHOT 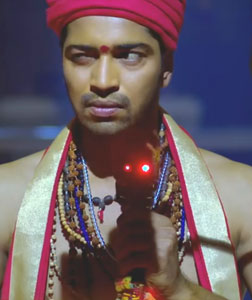