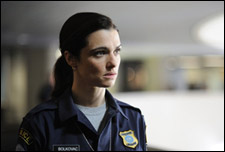 Shruthi / fullhyd.com
EDITOR RATING
7.0
Performances
Script
Music/Soundtrack
Visuals
8.0
7.0
6.0
7.0
Suggestions
Can watch again
No
Good for kids
No
Good for dates
No
Wait to rent it
No
Whistleblower isn't your usual Diwali fare; it's hard-hitting and gritty, and there are moments during the film that'll make you squirm in your seats. Think Erin Brockovich - only, this one is less gripping and more macabre.

The film, inspired by real events, is the story of a woman, Kathryn Bolkovac (ably played by Rachel Weisz), who stumbles upon a web of human trafficking and corruption when on a peacekeeping mission in post-war Bosnia. The movie begins with Kathryn, an American police officer and divorced mother, making an unsuccessful attempt to obtain a transfer to be with her daughter. On an impulse, she accepts a lucrative offer to be a United Nations peacekeeping officer in Bosnia.

Once there, she immediately comes face-to-face with a whole lot of atrocities that are the aftermath of a war, especially atrocities against women. After successfully prosecuting a case of domestic violence that her fellow workers had abandoned as routine, Kathryn is made head of the UN Gender Affairs Office.

Kathryn realizes there's more to her work than just monitoring the process of peace when she stumbles upon a bar where young girls are tortured and used as sexual slaves. And it gets murkier when she discovers that many of her fellow officers are deeply involved in it, both as clients and as human traffickers.

As Kathryn digs deeper, she realizes how deeply entrenched human trafficking is in the peacekeeping operations. Diplomats, fellow officers, international workers - most with diplomatic immunity - feature in her list of perpetrators.

The movie ends with a message, of the immediate dangers of the aftermath of a war, and of the prevalence of similar conditions and systems even in today's world - a chilling possibility. There is a sense of bleakness in the way the movie ends, and the audience leaves with a finality that is empty of justice or redress.

Some characters in the movie seem important to the plot but fizzle out without anything substantial towards the end. The plot slips up here and there, and doesn't quite manage to hold it all together tightly.

There are some gaps and underdeveloped characters in the storyline, but the performances of the cast more than make up for them. And like we already cautioned, it's not something you'd want to take your family to during the festival season, but definitely something to sink your teeth into if you have the stomach for it.

Rachel Weisz, as the gutsy woman officer, carries the role with conviction, and manages to evoke a sense of empathy amongst the viewers. Other notable performances come from Vanessa Redgrave (as Madeleine Rees, Kathryn's mentor and head of the UN Human Rights Commission), Monica Belluci (as Laura Leviani, the almost-helpful, yet chillingly emotionless head of the repatriation program) and David Strathairn (as Peter Ward, Kathryn's ally in internal affairs who helps her steal reports out of Bosnia). Nikolaj Lie Kaas, as Jan Ver Der Velde, a fellow officer and Kathryn's brief love interest, shows promise in an inconsequential role.

The movie, mostly set in low light, has some pretty disturbing visuals that'll make you uncomfortable more than once. They are integral to the narrative though, and lend quite fittingly to the sense of distress that is the underlying emotion in the movie.

You can be sure of one thing, though - if you do end up watching it, Whistleblower will stay with you for a few days.
Share. Save. Connect.
Tweet
THE WHISTLEBLOWER SNAPSHOT

ADVERTISEMENT
This page was tagged for
The Whistleblower english movie
The Whistleblower reviews
release date
Rachel Weisz, Vanessa Redgrave
theatres list
Follow @fullhyderabad
Follow fullhyd.com on
About Hyderabad
The Hyderabad Community
Improve fullhyd.com
More
Our Other Local Guides
Our other sites
© Copyright 1999-2009 LRR Technologies (Hyderabad), Pvt Ltd. All rights reserved. fullhyd, fullhyderabad, Welcome To The Neighbourhood are trademarks of LRR Technologies (Hyderabad) Pvt Ltd. The textual, graphic, audio and audiovisual material in this site is protected by copyright law. You may not copy, distribute, or use this material except as necessary for your personal, non-commercial use. Any trademarks are the properties of their respective owners. More on Hyderabad, India. Jobs in Hyderabad.