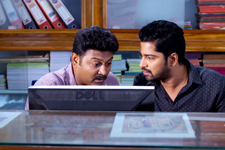 Anil Bandhakavi / fullhyd.com
EDITOR RATING
5.5
Performances
Script
Music/Soundtrack
Visuals
5.0
6.0
5.0
6.0
Suggestions
Can watch again
No
Good for kids
Yes
Good for dates
Yes
Wait to rent it
No
Bangaru Bullodu is a good one-time entertainer. Directed by P V Giri and written by Veligonda Srinivas and him, this film won't leave you in stitches, but it will satisfy you with some feel-good humour and a plot that unwinds with a collection of interesting twists and turns.

Bhavani Prasad (Allari Naresh) is the youngest of three brothers who were brought up by their grandfather, a goldsmith (Tanikella Bharani), from the time of Prasad's birth - the same time the boys' parents died in an accident. Prasad works as an Appraiser at the bank and is his grandfather's only hope, as the two older brothers mostly while away their time gambling.

The village where they live is centred around a temple whose deity is worshipped by residents to bring marital bliss and harmony into one's home. As time goes by and the younger generations move out of the village for opportunities elsewhere, the senior members of the village agree to hand over ownership of the temple to the government, in order to facilitate its continued maintenance.

When Prasad's grandfather suffers a sudden stroke, and is uncertain about how much longer he will live, he reveals a secret to Prasad. At the time of Prasad's birth, in an attempt to save his dying parents, he had sold away the gold that was given to him (the grandfather), under the auspices of the temple's priests, to make jewels for the deity. He was cornered after the accident and had no other way to come up with the money required for Prasad's parents' emergency treatment. In spite of this attempt at saving their lives, Prasad's parents ended up dead.

Unable to reveal his secret to anyone, and hoping only that the goddess in the temple would forgive him for this deed, he ended up making fake jewels to adorn the deity. The upcoming government takeover of the temple, and the possibility of his own death due to his deteriorating health, lead him to reveal his secret to Prasad. He also expresses his suspicion that this atrocious act of his, albeit committed in desperation, is why no beautiful bride has set foot in their home.

Prasad vows that he will bring his grandfather the gold required to make real jewels for the deity so that his grandfather can be redeemed and leave this world in peace. The only source of money that Prasad has is some land that is stuck in a court dispute that will take about six months to resolve. His colleague, and close friend, advises him to "borrow" the gold from one of the bank's lockers that is rarely visited by its owner. In about six months, once he's able to sell his land, he should be able to replace the gold.

Prasad acts on his friend's suggestion. The locker that he selects belongs to a local moneylender (Posani Murali Krishna), who suddenly decides to empty the locker as he would need the jewels to arrange a good match for his daughter, Boddu Kanaka Mahalakshmi (Pooja Jhaveri). As a result, Prasad decides to court Kanaka Mahalakshmi in an attempt to thwart her prospects with other men, allowing him to keep convincing her father to push off emptying the locker.

Prasad finds himself in a series of humorous predicaments that are quite entertaining, and keep you engaged. Allari Naresh is decent in executing his character's personality: a gentle-mannered but determined young man, who puts his family first. Vennela Kishore intermittently delivers the giggles in what is a routine performance for him. Pooja Jhaveri meets the requirements of the job in playing a foreign-crazed young girl ready for marriage.

The movie could've used some better writing to give the humour that extra punch, but in terms of the plot, all the dots connect quite well in the end without any overreaching turns. The music is quite average, and the film could frankly have done without the songs which were there to check off the boxes more than anything else. The visuals and cinematography by Satish Muthyala succeeds in achieving the rustic appearance needed for the story.

The weak areas of this film that, if improved on, could've bumped up the feel a couple of notches would be in the writing and performance areas, which are not independent of each other. The humour is pleasant but doesn't land hard. The performances meet the requirements of the script, but none of the characters is seriously gravitating. However, Bangaru Bullodu is still a movie that is worth your time for its interesting plot and humour-sprinkled, suspenseful execution.
Share. Save. Connect.
Tweet
BANGARU BULLODU SNAPSHOT 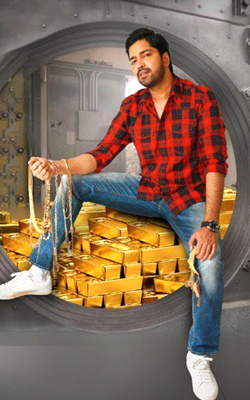 ADVERTISEMENT
This page was tagged for
Bangaru Bullodu telugu movie
Bangaru Bullodu reviews
release date
Allari Naresh, Pooja Jhaveri
theatres list
Follow @fullhyderabad
Follow fullhyd.com on
About Hyderabad
The Hyderabad Community
Improve fullhyd.com
More
Our Other Local Guides
Our other sites
© Copyright 1999-2009 LRR Technologies (Hyderabad), Pvt Ltd. All rights reserved. fullhyd, fullhyderabad, Welcome To The Neighbourhood are trademarks of LRR Technologies (Hyderabad) Pvt Ltd. The textual, graphic, audio and audiovisual material in this site is protected by copyright law. You may not copy, distribute, or use this material except as necessary for your personal, non-commercial use. Any trademarks are the properties of their respective owners. More on Hyderabad, India. Jobs in Hyderabad.