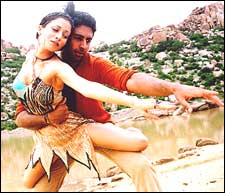 Deepa Menon / fullhyd.com
EDITOR RATING
7.0
Performances
Script
Music/Soundtrack
Visuals
NA
NA
NA
NA
Suggestions
Can watch again
NA
Good for kids
NA
Good for dates
NA
Wait to rent it
NA
Naach might seem to some as a movie that suffers from too much 'realism'. It doesn't; it's really an exercise in idealism. It tells us that you don't need to bend to common perception in order to fit in. That to succeed does not mean to sell out. The idea is alluring, even if you don't always buy it. Because like most idealists, Ram Gopal Verma doesn't see what he doesn't want to see.

Rewa is his hero. She is a dancer who is slumming it out (not really) in Mumbai while she waits for her chance to redeem Bollywood of its legacy of inanity. Rewa (Antra Mali) never says a thing against the present denigration of Hindi cinema, but Verma makes sure you hear about it. So it comes to be something of a lonely crusade of the artist against the machine. Truth and beauty against empty shape and form.

While Rewa makes her endless rounds in the film industry hoping to land a break as a choreographer, her boyfriend and antithesis, Abhinay (Abhishek Bachchan) has it easy. Abhi's goals are just as clear as her's, but they lie in the exact opposite direction. He wants fame, success and lots and lots of money. Simple plan and it doesn't take him long to make it real.

Abhi sees, however, that Rewa is different, that she wants different things from life. At least, he sees it initially. But after success has taken hold of him, things become foggy. Soon he gets restless and impatient with Rewa and what he sees as her unreal arrogance. Why can't she compromise just a little bit? Why can't she come down from her high horse and live in the real world? Go along with the tide, do things their way. After all, success is the ultimate validation. A speech like this doesn't help matters and the two of them part ways.

But Rewa does make it big. After encounters with leeches, opportunists and the casting couch, she meets Diwakar, a rich man with taste. He lets her do her own thing in his music video, which goes down great with the audience. To follow it up, they both launch on a musical and rope Abhi in to act opposite Rewa. So now you have two ex-lovers in a working relationship with an increasingly infatuated man. Suddenly three is a crowd.

Déjà vu is inevitable as Verma follows Rewa with all the indulgent fancy of the man who discovered Urmila with Rangeela. The dances are elaborate, with very few moments of annoyingly abstractedness. For the most part they're graceful, contained and enormously easy on the eye. Antra Mali is gorgeous in motion, even if her dialogue delivery is stilted. Abhisek Bachchan is intense, sharp and all there both as the preening star and the jealous lover.

In the end, Naach is a love story. It's also a musical and every dance sequence is used effectively to voice a mood or emotion: obsession, frustration, love, rage and jealousy. As Rewa says in the film, each song has its pace and each dance its reason. Naach sets its own rhythm, carefully and thoroughly. Whether you enjoy it or not depends on how compelled you feel to follow along.

ADVERTISEMENT
This page was tagged for
naach reviews
Naach hindi movie
Naach reviews
release date
Antra Mali, Abhishek Bachchan
Follow @fullhyderabad
Follow fullhyd.com on
About Hyderabad
The Hyderabad Community
Improve fullhyd.com
More
Our Other Local Guides
Our other sites
© Copyright 1999-2009 LRR Technologies (Hyderabad), Pvt Ltd. All rights reserved. fullhyd, fullhyderabad, Welcome To The Neighbourhood are trademarks of LRR Technologies (Hyderabad) Pvt Ltd. The textual, graphic, audio and audiovisual material in this site is protected by copyright law. You may not copy, distribute, or use this material except as necessary for your personal, non-commercial use. Any trademarks are the properties of their respective owners. More on Hyderabad, India. Jobs in Hyderabad.