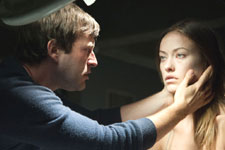 Zehra Abbas / fullhyd.com
EDITOR RATING
3.0
Performances
Script
Music/Soundtrack
Visuals
6.0
3.0
6.0
7.0
Suggestions
Can watch again
No
Good for kids
No
Good for dates
No
Wait to rent it
No
What's the best part of watching a horror film with your friends or a date? It's jumping up in fright in your seat every few minutes and then laughing at yourself. Sadly, when you finish The Lazarus Effect, you will leave behind the imprint of a bored bottom that stayed put throughout the film.

As made apparent by the Biblical reference in the title, The Lazarus Effect is about bringing the dead back to life. The entire movie takes place in a laboratory in California where engaged couple Frank (Mark Duplass) and Zoe (Olivia Wilde) are working to create a serum that will sustain brain activity in comatose patients, thus giving doctors additional time to help them to recovery. They are ably assisted by predictably goofy assistants Niko (Donald Glover) and Clay (Evan Peters). Undergraduate student Eva (Sarah Bolger) joins the team to film their experiments and, yes, predictably enough, she's hot. The team transitions from the verge to the centre of a breakthrough as soon as Eva starts filming. Shocker. And these are the kinds of shocks you can expect in this film.

The first "lazarus" of their experiments is a nice, old dog called Rocky. The team gets increasingly worried by Rocky's abnormally fast recovery and growing aggression, and you just know that he's going to go Cujo on them. The audience waits expectantly only to be disappointed by scene after scene of a really mournful and confused-looking doggie. The worst he does is escape from his cage and bare his teeth menacingly at easily spooked Clay.

At this point, the scientists' research is abruptly interrupted when an Evil Pharma Company sends its minions to shut their experiments down and steal their research. It might be worth pointing out, that they could take the legal route and simply buy the company that had given a grant to Frank and Zoe in the first place. Fair enough?

Nope. Our geeky scientists turn into renegade heroes who decide to break into the lab and recreate their breakthrough on camera to prove to the world that the research belongs to them. Long story short, Zoe dies and they perform the experiment on her instead. This time, you get Cujo. Cujo on steroids.

The premise sounds good enough, and you're willing to forgive the makers for using the entire first half of the film to lead us up to Zoe's death. So, you trot on out during intermission, wake yourself up with some coffee and come back for the second half which will surely be stuffed to the gills with chills and thrills.

What you get in the second half is as bad as the rhyming above. Clichés, clichés and more clichés. So, you have characters trapped in a confined space, power outages at crucial times, crashing and clanging sounds in the dark, flickering lights, scary shadows on walls and, of course, a maniacal, possessed Zoe sneaking up on the others and killing everyone off. Writers Luke Dawson and Jeremy Slater obviously have a very limited repertoire of horror films to refer to, but that didn't stop them from copy-pasting, in random order, every single cliché they knew and calling it a script. Sample this. The hot girl is the last to die. More? The black guy is the first to die. QED.

The laziness extends to the makers' attempts to infuse the movie with some semblance of depth. One short conversation between Frank, an atheist, and Zoe, a Catholic, about life after death is this film's contribution to the complex Science vs. religion debate that lies at the centre of the film's premise. However, nowhere does Frank show a God complex, and Zoe's Catholicism is relegated to wearing a cross around her neck. And in case you're keeping track of the clichés used in the movie, yes, she does tear it off and throw it away when she gets "possessed". The burning apartment leitmotif is another sluggish attempt at giving psychological depth to Zoe's character, but it remains a rather unsatisfyingly played out plot thread.

There are so many plot threads that remain unaccounted for at the end of the film, that after a point the viewer simply gives up wondering about them and just watches the unraveling of a rather clumsy tapestry. Who was spying on the scientists? Why? Is Zoe unable to transition to the after life? Or is she just reacting to the serum? Did Zoe really go to Hell? Or, did she just have a really bad hallucination? Simply put, the lack of clarity torpedoes the movie.

Obviously, the cast is unable to rise above these drawbacks. At the beginning of the film, you actually find the cast likeable, but then all of them quickly fade into the final frontier: unidimensionality. Olivia Wilde deserves special mention for doing her best, as she oscillates between demoniacal fits and helpless remorse. But her act isn't good enough to transcend bad writing, trite direction and boring cinematography.

One of the best moments of the film plumps for, surprisingly enough, the Indian government. Confused? Evan Peter's character Clay chokes to death when Zoe uses telekinesis to shove his electronic cigarette down his windpipe. All through this gruesome scene, the "smoking kills" ticker flashes on the right hand corner of the screen. On second thoughts, the best part of the film is actually its duration; a short and snappy 83 minutes. It finally ends with the cold corpses of all the characters strewn over the lab. Trouble is, The Lazarus Effect leaves the audience cold, too. Miss it.
Share. Save. Connect.
Tweet
THE LAZARUS EFFECT SNAPSHOT 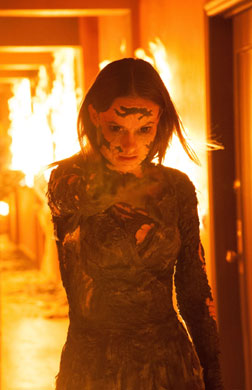 ADVERTISEMENT
This page was tagged for
The Lazarus Effect english movie
The Lazarus Effect reviews
release date
Mark Duplass, Olivia Wilde
theatres list
Follow @fullhyderabad
Follow fullhyd.com on
About Hyderabad
The Hyderabad Community
Improve fullhyd.com
More
Our Other Local Guides
Our other sites
© Copyright 1999-2009 LRR Technologies (Hyderabad), Pvt Ltd. All rights reserved. fullhyd, fullhyderabad, Welcome To The Neighbourhood are trademarks of LRR Technologies (Hyderabad) Pvt Ltd. The textual, graphic, audio and audiovisual material in this site is protected by copyright law. You may not copy, distribute, or use this material except as necessary for your personal, non-commercial use. Any trademarks are the properties of their respective owners. More on Hyderabad, India. Jobs in Hyderabad.