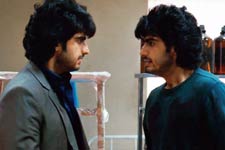 Nupur Barua / fullhyd.com
EDITOR RATING
6.0
Performances
Script
Music/Soundtrack
Visuals
7.0
5.0
5.0
7.0
Suggestions
Can watch again
No
Good for kids
No
Good for dates
Yes
Wait for OTT
Yes
When Yash Raj Films launched their television shows a few years ago, they did not create any waves as such. Not amongst the regular television watchers at least. To the discerning viewer, however, one name stood out as a promise of better things to come - Atul Sabharwal. His "Powder", a series on the Narcotics Bureau, was way ahead of its time, and remains a reference point to future filmmakers in the crime genre.

One cannot help but wonder, then, why Atul Sabharwal could not inspire himself to give us the much-expected incredible crime thriller that Aurangzeb could have been. Not that it is all bad, but first, the story.

Arya (Prithviraj) narrates the story. He is the son of a disgraced police officer (Anupam Kher), who now prefers to live away from the bustling city that a village named Gurgaon has become. Arya remains aloof from his father, and spends more time with his uncle Ravikant's (Rishi Kapoor) family.

Ravikant's son Dev (Sikander Kher) and son-in-law Vishnu (Sumeet Vyas), as well as Arya and Ravikant, are all police officers. It seems like a happy family, but Vishnu does not know that the family actually thrives on "collections" (read: bribes) from the common man.

Arya is not without his share of faults, and he shares his uncle's obsession with destroying the Yashwardhan (Jackie Shroff) empire. They have not been able to find evidence against the real estate magnate and his son Ajay (Arjun Kapoor), or even against Yash's business partner Neena (Amrita Singh). And then they find Vishal (Arjun Kapor), Ajay's look-alike.

For those who want to know if this is a remake of the classic Trishul, the answer is an emphatic NO. Of course, there are traces of the Amitabh Bachchan starrer (the complicated father-son and brother-brother relationships), but you will find yourself remembering so many other movies - Don, The Devil's Double and Deewane, amongst others. At the heart of it all are two main elements - a doppelganger and family ties. Combine that with crime, and it should bring enough thrills, right?

To begin with, Atul Sabharwal uses photograph after framed photograph to remind us who is related to whom and what the connections are. Somehow, there is a lack of chemistry among all the characters.

Also, he touches on a particular issue or complication, only to make matters trickier by introducing more irrelevant characters, instead of solving the problem. For example, the character of Ajay has a lot of potential in the screenplay, but he is kidnapped, and therefore redundant in a while. Again, Vishnu could have been a perfect foil to the scheming and plotting that the families indulge in.

The relationships are abrupt and convenient. Dialogues are erratic - some add punch, others sound unintentionally funny. The sub-plots become impossibly difficult to follow after a point. So, while as a story it sounds great (the Horace quote, in the beginning, about fathers leaving a bit of themselves in their sons, is a great introduction), the execution of the film just does not do justice to basic plot.

The one saving grace is the actors - at least, some of them. Rishi Kapoor is clearly the star here. He is menacing and loveable at the same time. He is in his element, and negative roles seem to suit him at this point in his career.

Jackie Shroff comes across as dignified and intense. And paired with Amrita Singh, who is suitably bitchy in her role, he shines, literally. Tanvi Azmi is monotonous. Anupam Kher and Deepti Naval are wasted, unfortunately.

Of the younger actors, Prithviraj is commendable, especially with his clear Hindi diction. His character graph is a little confusing (did he not know what on earth his uncle was up to?), but he emotes convincingly.

Sikander Kher could have done with a few more dialogues. Swara Bhaskar is as good as absent. Sasheh Aagha makes her debut in a bikini and is comfortable with nudity, but all that cannot distract from her lack of histrionic skills. Sumeet Vyas proved his mettle in English Vinglish recently, but he is not given enough screen time.

That brings us then to Arjun Kapoor - in a double role. He is more at home as Ajay, but Vishal gets more footage, and Arjun Kapoor falters when it comes to emotional confrontations and expressions. He seems uneasy at times, while in certain sequences, his confidence is astounding. And yes, he looks better with the stubble than without it.

The production design is decently apt. The costume design is not well thought out, and borders on tacky. The music is suitable, and strangely reminiscent of Hollywood superhero movie background scores. The cinematography is nothing to write home about, and the editing is not crisp. In fact, the middle portion the movie drags quite a bit.

If you like your action and shootouts and are not too particular about plot points, Aurangzeb is a must watch. For more serious film buffs, however, there are other releases to choose from this weekend.
Share. Save. Connect.
Tweet
AURANGZEB SNAPSHOT 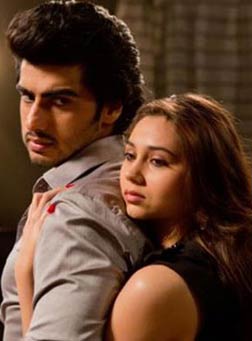 ADVERTISEMENT
This page was tagged for
Aurangzeb hindi movie
Aurangzeb reviews
release date
Arjun Kapoor, Sasheh Aagha
theatres list
Follow @fullhyderabad
Follow fullhyd.com on
About Hyderabad
The Hyderabad Community
Improve fullhyd.com
More
Our Other Local Guides
Our other sites
© Copyright 1999-2009 LRR Technologies (Hyderabad), Pvt Ltd. All rights reserved. fullhyd, fullhyderabad, Welcome To The Neighbourhood are trademarks of LRR Technologies (Hyderabad) Pvt Ltd. The textual, graphic, audio and audiovisual material in this site is protected by copyright law. You may not copy, distribute, or use this material except as necessary for your personal, non-commercial use. Any trademarks are the properties of their respective owners. More on Hyderabad, India. Jobs in Hyderabad.