Quite a few people speculate that B Gopal strongly believes that a director without a colorful-macho-mass hit every year is similar to a song without a melody, a hamburger without the meat, a theater with no audience. Most likely their guesswork is right; because our man makes a comeback with yet another mastodonic crude flick, which airs NTR Jr. as Allari Ramudu (and also as Aggi Ramudu under cover). Allari Ramudu, essentially an effort to promote NTR Jr. among the masses, is an emotional "mass" comedy sketched on the canvas of factionism.

Allari Ramudu gets underway with an Allari Alludu type story. Ramu (NTR Jr.) is a nephew of Chamundeswari (Nagma), a ruthless industrialist. Ramu enters Chamundeswari's home as a servant. Enter Mythili (Aarti Agarwal), the kindhearted daughter of Chamundeswari, who falls for the virtues and honesty of Ramu. More often than not Chamundeswari takes a dim view of the love of Mythili and Ramu, and goes ahead settling Mythili's marriage elsewhere. Now Ramu isn't sucking lollipop either. He counter-challenges Chamundeswari that he will make Mythili his lawful wife on 12th - Ekadasi - the upcoming Monday. Whether Ramu is able to keep up his promise is what the climax is all about. 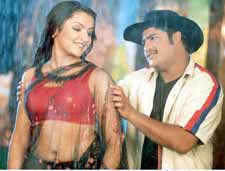 NTR Jr. does a fine job as the lead male and steals the show. Powerful dialogues by the Paruchuri brothers are well complemented by the compelling stance of Jr. throughout the movie. Also worth mentioning are his dance moves, which are as peppery as the profane lyrics themselves. We feel that it's nice to see that there is still someone out there who can do the rough-and-ready dance and isn't afraid to show it. What more, we even think NTR Jr. could be the future Michael Jackson - that is, once he manages to turn out to be skinny and fair enough! 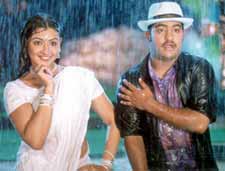 Nagma throws a monkey wrench in the work with an underwhelming performance in a handful of scenes. Aarti Agarwal's performance appears passable. She manages to give the impression of being fragile and seductive in some scenes, and forceful and independent in others. Background scores by R P Patnaik are good enough, but not as good as the ones in Narasimha Naidu.

Believe you know the whole lot about B Gopal's technique just because you have seen Narasimha Naidu about a zillion times? Don't bet on it - Allari Ramudu has no resemblance whatsoever to his earlier movies, with an exception to the emotional-mass-comedy-factionist-formula. The movie loses its integrity in the second half as Gopal tried to pop in heaps of detail.

Inference: With movies like Allari Ramudu, it's always best to relax your intellectual faculties and absorb the abundant sensual pleasures, be it the heart-stopping smile of Aarti Agarwal, an intoxicating serving of the Seema-Sandadi by NTR Jr., or the raunchy and gyratory music conceived by R P Patnaik.
Share. Save. Connect.
Tweet
ALLARI RAMUDU SNAPSHOT
See Allari Ramudu full details
ALLARI RAMUDU USER REVIEWS
1 - 15 OF 18 COMMENTS  |  NEXT  |  LAST
POSITIVE  |  NEGATIVE |  NEWEST  |  OLDEST  |  MOST HELPFUL  |  LEAST HELPFUL
USER RATING
4.6
325 USERS
Performances
Script
Music/Soundtrack
Visuals
NA
NA
NA
NA
Can watch again - NA
Good for kids - NA
Good for dates - NA
Wait to rent it - NA
Samara Simha Reddy on 8th Sep 2002, 7:19am | Permalink
well done, keep it up.....
RATING
10
Nagesh Venkata on 20th Aug 2002, 12:48pm | Permalink
It's a fantastic and marvelous movie with routine scenes.
RATING
10
Ram Kumar on 25th Jul 2002, 5:48am | Permalink
Gooooooood movie
RATING
8
Et Rty on 25th Jul 2002, 5:47am | Permalink
The film is awesome
RATING
10
RAMANA Reddy on 23rd Jul 2002, 4:02am | Permalink
Bullshit to give two and half stars for this movie. Full Hyderabad reviews no longer good. sucks! Even if this movie gets average collections then GOD has save and GUIDE all people of AP.
RATING
2
Ravi on 22nd Jul 2002, 8:40pm | Permalink
Really it's a bore movie for movie lovers.But the die hard fans of NTR may enjoy to some extent.
Better avoid this film..
RATING
2
Srinivas M on 22nd Jul 2002, 2:51pm | Permalink
My advice would be , better come out after first half, otherwise you will lose impression on the movie, rest is feft to viewers descretion.
RATING
2
Samba Siva on 22nd Jul 2002, 2:13pm | Permalink
Excellent mass movie.
RATING
8
Yawn Yawn on 20th Jul 2002, 9:44pm | Permalink
yawn
RATING
2
Telugu_movies _suck on 20th Jul 2002, 4:37pm | Permalink
"Connoisseur" and "Telugu movies" in the same sentence. You have got to be kidding. These two words don't belong together in the same page let alone the same line. Once again, I implore fullhyd.com to put out a job vacancy for a good movie critic. Kiran Nadella seems to lost his mind after stepping out of the movie hall. One tends to go through such a phase after seeing a movie like this. In fact, there has to be a law against making and watching such movies. To be fair, we must all thank kiran for enduring this piece of junk and mustering the energy to write a review about it.
RATING
2
Prasad Gara on 20th Jul 2002, 5:49am | Permalink
barring the fact htat he can dance well with that kind of personality there is nothing else in this mvoie..for that if you add people like Kiran nadella it will me more painful!
This isn offiial sex-talk 3 hour shoiw with double meaning dailoges and an old atta-alludu concept..
this movie will heavily depend up on hpow mass is going to look at it!
if this movie also clicks god save andhrites! I USED TO RELY MUCH ON Full hyd revieews but its going to be doubtful now once ihave gone through the review of Santhosam and this..they totally fool you the other way..these critcs..always make you fool..

ADVERTISEMENT
This page was tagged for
Allari Ramudu cinema in Telugu
allari ramudu full movie download telugu
Telugu Allari Ramudu
Allari Ramudu movie
aarthi agarwal navel stills in allari ramudu
Follow @fullhyderabad
Follow fullhyd.com on
About Hyderabad
The Hyderabad Community
Improve fullhyd.com
More
Our Other Local Guides
Our other sites
© Copyright 1999-2009 LRR Technologies (Hyderabad), Pvt Ltd. All rights reserved. fullhyd, fullhyderabad, Welcome To The Neighbourhood are trademarks of LRR Technologies (Hyderabad) Pvt Ltd. The textual, graphic, audio and audiovisual material in this site is protected by copyright law. You may not copy, distribute, or use this material except as necessary for your personal, non-commercial use. Any trademarks are the properties of their respective owners. More on Hyderabad, India. Jobs in Hyderabad.