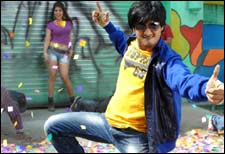 Deepa Garimella / fullhyd.com
EDITOR RATING
5.0
Performances
Script
Music/Soundtrack
Visuals
7.0
5.0
6.0
7.0
Suggestions
Can watch again
No
Good for kids
No
Good for dates
Yes
Wait for OTT
Yes
When Nikhil Siddhartha screams in his intro scene, "Manaki background lenappudu background manamey set chesukovali", you beam in agreement. And for a long while, this "starless" film displays enough chutzpah to make you root for it.

Indeed, Disco starts off as a rather fun, loud, vibrant entertainer, that held a lot of promise. But despite being a comedy that follows the rules, and even features talented faces, it doesn't live up to the mark it sets for itself.

The hero (Nikhil Siddhartha) is called Disco because, apparently, when he was born, the lights in his hospital room flashed like those at a disco. So Disco and his wastrel friends are prancing about town, getting drunk and landing behind bars repeatedly, when he realizes he must do something productive and get his friends as well to be productive.

This leads to him approaching Surya Bhai (M S Narayana), in a brilliant parody of Businessman, for a job. One thing leads to another, and Disco soon nails an opportunity to make, actually, steal, tons of money from a goon called Bhaskarabhatla (Jeeva).

With the cash, Disco and gang go to Bangkok, ostensibly for a bachelors' outing. However, they end up in the home of a rich don (Ashish Vidyarthi), who is, coincidentally, the boss of Bhaskarabhatla.

Even more coincidentally, Disco wants to land the don's daughter. What is Disco after? What is his past? Will he succeed?

The first half is very well-executed. The one tasteless toilet joke doesn't put you off too much, since there's a lot of other stuff happening on screen. In addition to M S Narayana's hilarious Businessman spoof, there is Raghu Babu as a hopelessly bad debtor - these two senior comedians have pretty good roles and jokes written for them.

However, the second half dips, despite peppy performances by Nikhil Siddhartha and gang. There's little humour in this half, even though Ali is brought in for a breather. Absurd twists abound, and after dragging the film out to an hour, the director abruptly wraps it up.

Throughout, the hero's character is weirdly written. He's shown both as a selfish manipulator and a do-gooder. But you never understand why, if he loves his friends so much, he keeps setting them up in highly dangerous situations.

And we don't know if this is an issue with the Censor Board or with our filmmakers, but entire dialogues have been beeped out of Disco. Something is wrong somewhere, if this amounts to about 15% of lines being censored.

Nikhil Siddhartha is, as usual, electric. He retains the spark in him, but he is still too frail for a "hero" - unless he's targeting the Allari Naresh niche - and fighting hefty goondas single-handedly just doesn't gel with his frame.

The sidekicks are well-played, by Khayyum and Vijay Sai. Ashish Vidyarthi is quite boring to watch, since he does nothing new.

The heroine is quite a flatly written character, played by an even more spiritless Sara Sharma. The two don't make a good couple, and it's hard to imagine why Disco falls for her anyway.

The music is pretty good, with some foot-tapping mass numbers. The movie also has a bright and colourful look, with good production values.

This is a leave-your-brains-behind kind of movie in the extreme. Watch it if you're game for some mindless fun, or if you're sorely out of options.
Share. Save. Connect.
Tweet
DISCO SNAPSHOT 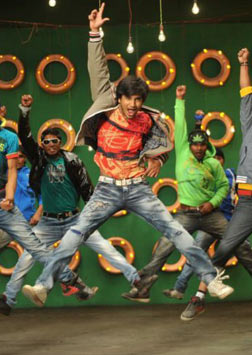 ADVERTISEMENT
This page was tagged for
Disco telugu movie
Disco reviews
release date
Nikhil Siddhartha, Sara Sharma
theatres list
Follow @fullhyderabad
Follow fullhyd.com on
About Hyderabad
The Hyderabad Community
Improve fullhyd.com
More
Our Other Local Guides
Our other sites
© Copyright 1999-2009 LRR Technologies (Hyderabad), Pvt Ltd. All rights reserved. fullhyd, fullhyderabad, Welcome To The Neighbourhood are trademarks of LRR Technologies (Hyderabad) Pvt Ltd. The textual, graphic, audio and audiovisual material in this site is protected by copyright law. You may not copy, distribute, or use this material except as necessary for your personal, non-commercial use. Any trademarks are the properties of their respective owners. More on Hyderabad, India. Jobs in Hyderabad.