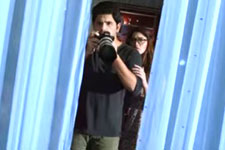 Daphne Rose / fullhyd.com
EDITOR RATING
7.0
Performances
Script
Music/Soundtrack
Visuals
7.0
7.5
5.0
6.0
Suggestions
Can watch again
Yes
Good for kids
Yes
Good for dates
Yes
Wait to rent it
No
Destiny happens to Jeeva (Allu Sirish) and Jyotsna (Surbhi) when they meet accidentally in the parking lot of a mall - eyes meet, hearts beat fast and numbers are soon exchanged. Fifteen minutes into Okka Kshanam, everything's going swimmingly well. There's no menacing father / brother / jilted lover of the heroine to throw a spanner in the works, no mother who'd made a deathbed promise to her brother signing her infant daughter away to his son, no... you get the drift.

Only, fate has been the same be it the '90s or now, and that same fate has other plans here. Jo has a habit of snooping around and soon knows way too much (or at least thinks she does) about another couple in the community (Seerat Kapoor and Srinivas Avasarala). How the two couples' lives intertwine and how Jeeva goes about trying to set things right forms the crux of the story.

A fairly decent suspense thriller, Okka Kshanam's strength lies in its editing. Every thriller needs a masterful editor who knows exactly when to hold back and when to give in, and that is where Vi Anand's movie scores, too - especially in the post-interval session that has everyone in the hall glued to their seat waiting to find out the whys and the hows and the whens of the story.

The screenplay, too, is taut, and complements the happenings in the movie without warranting a statutory leave-logic-behind warning. All the sub-plots in the film blend in seamlessly and support each other in taking it forward. The only drag is the first half hour, which in hindsight is probably required, but more on that in just a bit.

Allu Sirish is effective in the role he portrays, and is growing as an actor with each film. Kudos to him for choosing to explore a wide variety of genres this early in his career. While only time will tell if he is able to add his name to his illustrious family's hall of fame, if he plays his cards right, he is sure to be able to carve his own niche.

The other three leads - Surbhi, Seerat Kapoor and Srinivas Avasarala - are cast well, too, and justify their roles without seeming too over-the-top. A special mention to Seerat Kapoor for playing her part with the gravitas required for such a character and not seeming like a ditz.

The only negatives in the movie are the music, and, as we mentioned, the first half hour. While the background score contributes to the story well enough barring the odd mind-jarring note, the songs themselves are poor and incongruously placed. The soundtrack has little to no recall value, and seems to have been put in just for the heck of having something there.

The first half hour, too, though perhaps necessary to establish the romance between the leads, is poorly scripted, and leaves you feeling, well, nothing. You know the lead pair is in love because they tell you so, certainly not because you're feeling any vicarious butterflies in your stomach. Which is a pity because for a suspense story that's based on the premise of love, the film doesn't make you feel invested enough in the romance as such. The leads could've been a brother-sister/mother-son pair for all we care and the impact would've still been the same. A lost opportunity, but one we're hoping will be remedied in the director's next outing.

So no, Okka Kshanam is not the perfect film, but it does well in trying to deliver on the promises it makes. It scores high on its editing, storyline and performances (in that order, yes), and successfully gets you to enjoy it provided you don't mind being patient for a while.
Share. Save. Connect.
Tweet
OKKA KSHANAM SNAPSHOT 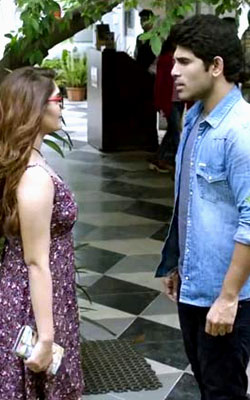 ADVERTISEMENT
This page was tagged for
Okka Kshanam telugu movie
Okka Kshanam reviews
release date
Allu Sirish, Surbhi
theatres list
Follow @fullhyderabad
Follow fullhyd.com on
About Hyderabad
The Hyderabad Community
Improve fullhyd.com
More
Our Other Local Guides
Our other sites
© Copyright 1999-2009 LRR Technologies (Hyderabad), Pvt Ltd. All rights reserved. fullhyd, fullhyderabad, Welcome To The Neighbourhood are trademarks of LRR Technologies (Hyderabad) Pvt Ltd. The textual, graphic, audio and audiovisual material in this site is protected by copyright law. You may not copy, distribute, or use this material except as necessary for your personal, non-commercial use. Any trademarks are the properties of their respective owners. More on Hyderabad, India. Jobs in Hyderabad.