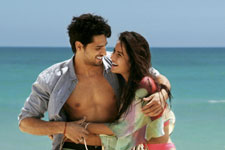 Jaiwantika Dutta-Dhupkar / fullhyd.com
EDITOR RATING
5.0
Performances
Script
Music/Soundtrack
Visuals
5.0
4.0
6.0
7.0
Suggestions
Can watch again
No
Good for kids
Yes
Good for dates
Yes
Wait to rent it
Yes
Dharma Productions' last supernatural outing Kaal was an absolute disaster at the BO - however, Karan Johar refuses to give up, and so he's back again with Baar Baar Dekho, a pretentious film about time travel with a rather forgettable title.

The first half hour of BBD traipses along a typical Dharma productions landscape, telling you about childhood lovers Diya "DK" Kapoor (Katrina Kaif) and Jay Verma (Siddharth Kapoor) joined together at the hip since the day they were born by Destiny, no less. When push comes to shove and the wedding's due, Jay develops cold feet almost on cue. His logic is that most married couples get divorced, so why bother, and isn't the whole thing just a sham anyway? Actually, those questions remain unanswered right to the end, but BBD is not where one ought to look for strong logical arguments in favour of marriage or against it, anyway.

After the pre-wedding tiff in which he calls off their wedding, Jay falls asleep only to wake up 10 days later in time and discover they're on their honeymoon - apart from being a mathematical genius, Jay apparently also has a supernatural capability for time travel. The film tracks three more similar episodes in which Jay falls asleep only to wake up years later in time (two, 16 and 30 years later) - older, and in different situations. Then he gets to go back to the past, which is a chance for him to mend his marriage. All of these experiences obviously have to have a moral, aptly delivered by a belligerent priest (Rajat Kapoor) who turns up everywhere to deliver the good word, which is a bit of a dampener and can be loosely translated to mean: "Yesterday was history, tomorrow is mystery, but today is a gift, and that's why it's called the present". The mumbo-jumbo in BBD can be relentless.

BBD is probably called BBD because it repeats the same scenes over and over again. Monotony is rife, and if the screenplay is not repetitive, the characters constantly make references to incidents in their pasts to keep the film going. And there's no character development as such - BBD takes its characters well into the future (the 2040s) but they stay as silly as they were at the start of the film.

By the end of the film Jay's really sorry as well. For what, you want to know. There isn't a clear answer to that one. Jay Verma seems to be sorry for everything - he's literally lived his life before his time and seen his future. Since he's such a planner, he then decides to plan better, so that he can avoid hurting himself and the people he loves so much. After all, he's "not useless, he's a genius". Okay, point noted. This anti-planning film, which has taken multiple digs at people who were "too logical" and so on, then gets Jay Verma to do the real stuff - which is become the emotional manipulator he always had the potential of becoming. Eureka.

Siddharth Malhotra sleepwalks through the film with a permanently perplexed expression, and Katrina looks as gorgeous and wooden as always. The duo make a good pair onscreen. None of the other actors gets much of a chance to do much. The cinematography (Ravi K Chandran) keeps viewers interested, and BBD has some very interesting VFX which it uses to compensate for everything, from its bad writing, to its lack of adequate locations, to its lack of character artistes. The editing (Amitabh Shukla) actually saves this ridiculous film. The music (Arnaal Malik, Arko, Badshah, Jasleen Royal, Bilal Sayeed) is mostly a let-down, with the obvious exception of Kala Chashma - some songs however might appeal to a niche audience. Nitya Mehra's direction could do with some more focus - maybe next time.

As the film noisily rattles towards its conclusion, you begin to understand what BBD is actually about. That feeling of achievement, of pure genius, is truly indescribable. In fact, you ought to watch BBD just for that fabulous feeling. So what's BBD about, ultimately? BBD's about how Jay Verma uses both his supernatural powers and his brilliant planning abilities to go to the past to change it and get his life back on track.

What's so great about the story of somebody who has it so easy, is what you ask. But BBD isn't a hymn about the destination; it's a paean to the ride.
Share. Save. Connect.
Tweet
BAAR BAAR DEKHO SNAPSHOT 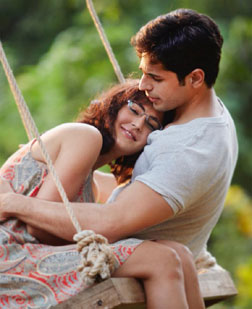 ADVERTISEMENT
This page was tagged for
Baar Baar Dekho hindi movie
Baar Baar Dekho reviews
release date
Katrina Kaif, Siddharth Kapoor
theatres list
Follow @fullhyderabad
Follow fullhyd.com on
About Hyderabad
The Hyderabad Community
Improve fullhyd.com
More
Our Other Local Guides
Our other sites
© Copyright 1999-2009 LRR Technologies (Hyderabad), Pvt Ltd. All rights reserved. fullhyd, fullhyderabad, Welcome To The Neighbourhood are trademarks of LRR Technologies (Hyderabad) Pvt Ltd. The textual, graphic, audio and audiovisual material in this site is protected by copyright law. You may not copy, distribute, or use this material except as necessary for your personal, non-commercial use. Any trademarks are the properties of their respective owners. More on Hyderabad, India. Jobs in Hyderabad.