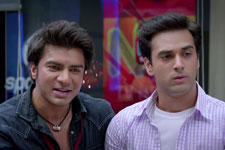 Nupur Barua / fullhyd.com
EDITOR RATING
5.0
Performances
Script
Music/Soundtrack
Visuals
5.0
4.0
5.0
6.0
Suggestions
Can watch again
No
Good for kids
No
Good for dates
Yes
Wait to rent it
Yes
Two bumbling idiots who are loser reporters, one hot boss, monotonous existence, and then a scam of a lifetime revealed, complete with a dead body. Yes, O Teri is a tribute to / a rip-off of / inspired by Jaane Bhi Do Yaaron, no question about it. What exactly the makers were thinking when they decided to do this, is not clear. Can one really take a cult classic and remake it without being exposed themselves? Or is this movie a reality that is rooted in our present day that was dying to be made? You decide.

The two roommates are freshly recruited journalists in a media house, but their stories do not cut it, so they are eventually fired. Desperate to make amends, the two idiots cannot think of a single story that can change their lives around and make them worthwhile.

And then, just like that, a dead body falls into their laps. Given that it is the corpse of a murdered CBI officer, PP and AIDS decide to investigate further. They think they have a scoop, but what they do not realise is how many purported foes will join hands to lead them astray from their goal.

Sounds familiar? Of course, in case you missed the reference to the Kundan Shah film, the plot involves politicians, construction companies, media houses, and, to put it in current perspective, an international sport event called the Asian Olympic Games (along the lines of the Commonwealth).

The movie belongs, by default, to the comedy genre, but it is nowhere near the satire that Jaane Bhi Do Yaaron is. It has its moments of unadulterated nonsense, but such sequences are immediately diluted by a redundant follow-up scene that spoils the mood. There are many instances in the film when you think it is getting better, but then along comes another OTT delivery by one of the actors, and you realise that expecting too much from the movie will only leave you frustrated.

The writer does make a comment on the state of affairs in our society today, and how a corrupt few control the lives of billions in the nation, but the intensity is somehow marred by the silly dialogues and the near-schizophrenic quality of the screenplay. It tries to be too clever, and with that, it loses an audience that would have appreciated a less condescending piece of writing. You are never sure whether a certain sequence is supposed to be slapstick or just plain tragicomic. The dialogues are ear-splitting, and jarring.

All the actors seem to be vying for more space and louder deliveries, and in the process, the choreography in the scenes is terribly haphazard, and confusing. Some of the humour is plain crass, and lacks the sophistication that could have contributed towards making this a more intelligent movie. Also, naming a character AIDS is pretty insensitive, universally.

All the actors ham, in varying degrees. Pulkit Samrat is the only one who manages to look normal. Bilal Amrohi needs to learn screen presence (yes, it is a craft, not an art), and dialogue delivery. Mandira Bedi and Anupam Kher are so loud in appearance and character that they get on to your nerves. Sarah Jane Dias is presentable, but she is not too sure of her role. Manoj Pahwa is wasted. And Vijay Raaz is typecast. All the actors are OTT, which may have more to do with the director's instructions and nothing to do with their talent.

Set in Delhi, the production design is commendable enough, and the costumes are average. Given that it is an attempt at satire, some of the get-ups are predictably gaudy and loud.

The cinematography captures the locations well, and the lighting is probably better than the other movies releasing this weekend. The editing is crisp, but it seems tedious, despite the relatively shorter length of the film, because the story goes nowhere.

The songs are catchy, at least some of them, but their placement in the film is questionable. The "butt" song is foot-tapping, for some, but a sorry excuse of a love/lust song, and pretty demeaning to a woman's anatomy.

O Teri is a movie that one needs to watch when one has a relatively stress-free mind. If your life is filled with problems, you do not need this film to remind you of your situation, especially when it offers neither an escape from nor a portrayal of the real world. In fact, it talks down to you. You have to be a very patient person to sit through the movie.
Share. Save. Connect.
Tweet
O TERI SNAPSHOT 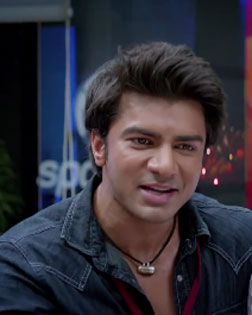 ADVERTISEMENT
This page was tagged for
O Teri hindi movie
O Teri reviews
release date
Pulkit Samrat, Bilal Amrohi
theatres list
Follow @fullhyderabad
Follow fullhyd.com on
About Hyderabad
The Hyderabad Community
Improve fullhyd.com
More
Our Other Local Guides
Our other sites
© Copyright 1999-2009 LRR Technologies (Hyderabad), Pvt Ltd. All rights reserved. fullhyd, fullhyderabad, Welcome To The Neighbourhood are trademarks of LRR Technologies (Hyderabad) Pvt Ltd. The textual, graphic, audio and audiovisual material in this site is protected by copyright law. You may not copy, distribute, or use this material except as necessary for your personal, non-commercial use. Any trademarks are the properties of their respective owners. More on Hyderabad, India. Jobs in Hyderabad.