Mithun Verma / fullhyd.com
EDITOR RATING
3.0
Performances
Script
Music/Soundtrack
Visuals
NA
NA
NA
NA
Suggestions
Can watch again
NA
Good for kids
NA
Good for dates
NA
Wait to rent it
NA
The concept of choosing lead actors for Telugu movies has confused the very best of people. But luckily we're not the best of people, and we take what comes our way. Even then, one has to wonder at the modus operandi of picking lead actors these days:

Greedy producer: What is the guarantee you can act well? You have acting lessons?

Greedy producer: But I will pay you only Rs. 25 crores and the heroine will only be Monica Bellucci. You can only have 500 slaves with you at all times. No negotiations. Agreed?

Greedy producer: Can you say anything else? The cat got your tongue?

Improving Mass-star: No! Huh? My great grandfather's nephew's neighbour is an ex-minister.

That's how a normal person figures the audition of a new hero would be like.

But in reality, there's also another productive method of testing. You put the guy in a film and release it. If the audiences dig him, you offer him another movie. If they reject him, you offer him 10 more movies. That gives him ample time to improve, and enough time for a new species of hero to arrive, making this one look like Brad Pitt. This method is completely foolproof. We're all fools and they have a 150kg proof to show.

Anyway, now to the movie. 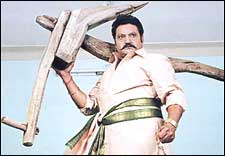 Tiger Harischandra Prasad (Hari Krishna) earns his title 'Tiger' as he once makes a tiger plough his field. That defines him. Okay, that defines the special effects for the film. But we need not really define him, do we? The man of the working people; the leader of the farmers; the man who suddenly appears wherever a sari is pulled or some oldie is being kicked; basically, the man who hates us having fun.

He's fighting intensively for the rights of farmers. These lads sweat their blood, but the middlemen and retailers have their bites. Tiger is out to stop this injustice and to give some lip to the CM and PM about the necessary changes required to help the farmers. Ultimately, he succeeds in convincing the authorities to take the soil-breeders, the real heroes, very seriously. The theme of the film earns it a decent rating, although half-a-star isn't much.

This might've as well been a B-grade Narayana Murthy revolutionary pain, but one doesn't associate pains with Ramya Krishna around. But that's the pain: she's hardly around. This seems like an emerging trend in Tollywood. Not Ramya Krishna's absence, but movies with social messages. Veede was about polluted water and this one is about cheating farmers. But nonetheless, there's always the mandatory song and a Rayalaseema-sort dialogue. Finally, there's the issue of actors.