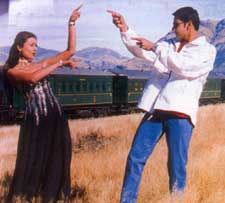 EDITOR RATING
6.0
Performances
Script
Music/Soundtrack
Visuals
NA
NA
NA
NA
Suggestions
Can watch again
NA
Good for kids
NA
Good for dates
NA
Wait to rent it
NA
First Shah Rukh did it, it was original and we all loved it. Then Nagarjuna did it, and we decided that it was at least locally original, so fine. But when you have to extend the originality thing to each hero, isn't it like stretching it a bit? We mean, what's this, one of those epic Broadway dramas that go on and on with changing faces?

Starting off with a phenomenal hit in Prince that even made him one of the highest-paid actors in Tollywood, Mahesh Babu just managed to scrape through with his much-hyped second movie, and has now produced the most mediocre film yet of his 3-film career.

The plot of Vamsi is a direct lift from Dilwale Dulhaniya Le Jayenge, and has Vamsi, the famous fashion designer from Hyderabad, going to Australia to participate in the South-Asian Designers Show. But before that he is asked by the promoters to go round the country for a month (don't ask us why). And now follows the DDLJ love track from the beginning to the interval.

Mahesh and Namrata get into the same compartment in the last minute, fighting for a doll in a super bazar. Then they get separated from their friends, then they end up in a motel, blah, blah, blah. Love springs and gets buttressed all the more when Mahesh's model, Mayuri Kango, gets injured in a staircase fall (borrowed from Dil To Pagal Hai?) - a disappointed Vamsi is given a pleasant surprise by Namrata, who catwalks his clothes to fame and wins the desired award for him.

The fashion show and the love affair being successful, it's time for some serious action. With both of them back in India, Namrata's father Nasser fumes at their love affair. And in the meanwhile, Krishna kidnaps Namrata. Mahesh, who goes to rescue Namrata, is educated about the villainish ways and deeds of Nasser. And this turns Mahesh against him. And from here, it's gore all the way.

The film, especially the first half that is supposed to be a romantic comedy, is insipid and devoid of any kind of substance. Most of the scenes from DDLJ are lifted frame to frame, and even in that the director does not excel.

Mahesh Babu looks lively, but Namrata is lifeless all through the first half of the film, though in the second half the director makes frantic attempts to retrieve lost ground. Retrieve he can't, but he manages to infuse a semblance of interest in the audiences till the monotonous ordeal of muzzle blasts takes over.

This one is okay for a lazy Sunday evening in front of the telly, but watching it in a theater paying good money is too much optimism.
Share. Save. Connect.
Tweet
VAMSI SNAPSHOT

ADVERTISEMENT
This page was tagged for
vamsi movie review
Vamsi telugu movie
Vamsi reviews
release date
Mahesh Babu, Namrata Shirodkar
Follow @fullhyderabad
Follow fullhyd.com on
About Hyderabad
The Hyderabad Community
Improve fullhyd.com
More
Our Other Local Guides
Our other sites
© Copyright 1999-2009 LRR Technologies (Hyderabad), Pvt Ltd. All rights reserved. fullhyd, fullhyderabad, Welcome To The Neighbourhood are trademarks of LRR Technologies (Hyderabad) Pvt Ltd. The textual, graphic, audio and audiovisual material in this site is protected by copyright law. You may not copy, distribute, or use this material except as necessary for your personal, non-commercial use. Any trademarks are the properties of their respective owners. More on Hyderabad, India. Jobs in Hyderabad.